Ordóñez spent the first eight years of his major league career playing with the Chicago White Sox. In the five seasons prior to 2004, Ordóñez hit at least .300 with 29 home runs and 99 RBI, and reached the 30-home run, 100-RBI plateau in four of those seasons. He also collected over 70 extra-base hits from 2001–03, but a collision with second baseman Willie Harris on Omar Vizquel's popup to right field during a May 19, 2004 game against the Cleveland Indians, cost him two trips to the disabled list and two surgeries on his left knee. He finished with .292, 9 home runs, and 37 RBI in 52 games. 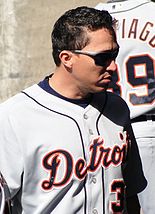 Ordóñez signed with the Detroit Tigers as a free agent on February 7, 2005. His five-year, $85 million contract was the second largest the Tigers had ever paid a player. Because of Ordóñez's knee injury from the 2004 season, the contract included a clause stating that if he were to spend more than 25 days on the disabled list due to the same injury, the contract could be bought out for $3 million at the discretion of the Tigers' management.

After he signed with Detroit, a minor war of words occurred between Ordóñez and Ozzie Guillén, his former manager and teammate in Chicago.[1] Their apparent mutual dislike for each other was a contributing factor to Ordóñez's departure from the White Sox. However, the rivalry appears to have cooled, as Guillén actually requested Ordóñez for the 2006 All-Star Game.

In 2005, Ordóñez's first season for Detroit, he strained an abdominal muscle during the first week of the season and spent the next three months on the disabled list, as the strain turned out to be a hernia. This caused him to rest after corrective surgery for two months following the injury, after which he began a rehabilitation assignment at the Tigers' AAA minor league team in Toledo. He returned to the Tigers' lineup in early July, and once again became a star by hitting consistently over .300 while batting clean-up.

In 2006, Ordóñez returned to the All-Star form. He was selected to the 2006 All-Star game as an injury replacement for Red Sox OF Manny Ramírez. At the All-Star break, Ordóñez was hitting .312 with 16 HR and 62 RBI, and was a mainstay for a Tigers team that was a major-league best 59–29 at the break.

On October 14, 2006, Ordóñez completed the Tigers' sweep of the ALCS with a three-run homer against Huston Street of the Oakland Athletics, with two outs on a 1–0 count in the bottom of the 9th, the 8th time in MLB history that a post-season series has ended with a home run. The win sent the Tigers to their first World Series appearance since 1984. Coincidentally, it also happened 22 years to the day from when the Tigers won the World Series in that year.

On April 29, 2010, Ordóñez got his 2000th career hit against the Minnesota Twins' Carl Pavano.[citation needed] On July 24 Ordóñez hurt his ankle sliding into home. X-rays revealed a fracture that was expected to heal in six to eight weeks, but some weeks after the injury it was reported Magglio would miss the rest of the season.[2] Following the season, the Tigers declined Ordóñez's $15 million option for 2011.[3]

On October 8, 2011 during a playoff game with the Texas Rangers, Ordonez re-fractured the ankle that he had fractured in 2010, he was then ruled out for the rest of the 2011 postseason.

In Detroit's Comerica Park, some Tiger fans sported curly black wigs underneath their baseball caps in support of their long-haired right fielder. This ended in mid-2009 when he cut his hair. He is also sometimes referred to affectionately as "Maggs". In mid-2006, a group of bloggers began referring to Magglio as "The Big Tilde". This nickname has been referenced on Deadspin, MLB.com, and during a Fox Sports broadcast.[5]

Ordóñez is a supporter of the Venezuelan President Hugo Chávez, and in early 2009 appeared in a televised political ad which assured the Venezuelan people that "the best of the revolution is yet to come."[6] As a result, during the 2009 World Baseball Classic, Ordóñez was booed by anti-Chávez Venezuelan fans, during his at bats, and while he was on the field.[7]

‹ The template below is being considered for deletion. See templates for discussion to help reach a consensus.›
Categories: