Comerica Park is an open-air ballpark located in downtown Detroit, Michigan. It serves as the home of the Detroit Tigers of Major League Baseball's American League, replacing historic Tiger Stadium in 2000.

The park is named after a corporate sponsor, Comerica Bank, which was based in Detroit at the time the park opened, and which paid for the naming rights. Comerica's headquarters have since been moved to Dallas, Texas, but the bank still retains a large presence in Detroit. The stadium's seating capacity is 41,255.

Groundbreaking for a new ballpark to replace Tiger Stadium for the Detroit Tigers was held on October 29, 1997 and the new stadium was opened to the public in 2000. Comerica Park sits on the original site of the Detroit College of Law. At the time of construction, the scoreboard in left field was the largest in Major League Baseball.[4] The first game was held on April 11, 2000, against the Seattle Mariners. The new stadium is part of a downtown revitalization plan for the city of Detroit, which included the construction of Ford Field, adjacent to the park. In December 1998, Comerica Bank agreed to pay $66 million over 30 years for the naming rights for the new ballpark. Upon its opening, there was some effort to try to find a nickname for the park, with the abbreviation CoPa suggested by many. It is often referred to simply as Comerica. The first playoff game at Comerica was played on October 6, 2006 against the New York Yankees. It hosted its first World Series later that month.

Tiled Tigers logo outside of the front entrance.

In contrast to Tiger Stadium, which had long been considered one of the most hitter-friendly parks in baseball, Comerica Park is considered to be extremely friendly to pitchers. Except for dead center—420 feet (130 m) versus Tiger Stadium's 440 feet (130 m)—the outfield dimensions were more expansive than those at Tiger Stadium. This led to complaints from players and fans alike, and engendered the sarcastic nickname Comerica National Park.

Although a few public figures—notably radio announcer Ernie Harwell—supported the dimensions, most agreed that the left-field wall, in particular, needed to be brought closer to home plate. Before the 2003 MLB season the club did so, moving the distance from left-center field from 395 to 370 feet (120 to 110 m). This also removed the flagpole from the field of play, originally incorporated as an homage to Tiger Stadium. Two years later, the bullpens were moved from right field to an empty area in left field created when the fence was moved in. In place of the old bullpens in right field, 950 seats were added for a new capacity of 41,070.

The first game at Comerica Park was held on Tuesday, April 11, 2000 with 39,168 spectators attending, on a cold snowy afternoon. Grounds crew had to clear snow off the field from the night before. The Tigers defeated the Seattle Mariners 5–2. The winning pitcher, as in the final game at Tiger Stadium, was Brian Moehler.

Original plans called for an F-16 flyover from nearby Selfridge Air National Guard Base and a parachutist carrying the first pitch ball and the rosin bag. Unfortunately, the weather caused a scratch of both occurrences. Nonetheless, there was a passing of the flag to the flagpole in center in reverse order as there was to take it down from Tiger Stadium. Elden Auker, who had received the flag at Tiger Stadium and given it to Brad Ausmus, passed the flag along a line of players to the flagpole in center. The unfurled 150x300 American flag is the largest in the nation[citation needed], for the singing of the national anthem.

Entrance to the ballpark is located across from the Fox Theatre and between two historic downtown churches, St. John Episcopal Church and Central United Methodist Church. Outside of the main entrance to the stadium there is a tiger statue that is approximately 15 feet (4.6 m) in height. There are eight other heroic-sized tiger statues throughout the park, including two prowling on top of the scoreboard in left field. These tigers' eyes light up after a Tigers home run or a victory and the sound of a growling tiger plays as well. The tigers were fabricated by ShowMotion Inc. in Norwalk, CT. Along the brick walls outside of the park are thirty-three tiger heads with lighted baseballs in their mouths.

At the left-center field concourse there are statues of all of the players whose numbers have been retired by the Tigers (with the exception of Jackie Robinson, whose number was retired in every MLB park in 1997). They include Al Kaline, Charlie Gehringer, Hal Newhouser, Willie Horton, Hank Greenberg. A statue of Ty Cobb is also there, but he does not have a number, as he played baseball before players began to wear numbers on their uniforms. These players' names, along with the names of Hall of Fame players who spent a significant part of their career with the Tigers, are also on a wall in left center field, and to them is added Ernie Harwell, the team's long-time radio announcer. Harwell has a statue just inside the stadium on the first base side.

The field itself features a distinctive dirt strip between home plate and the pitcher's mound. This strip, sometimes known as the "keyhole", was common in early ballparks, yet very rare in modern facilities (the only other current major league stadium to feature this being Chase Field in Phoenix.)

In the northeastern corner of the stadium behind the stands from the third base line is a Ferris wheel with twelve cars designed like baseballs. In the northwestern corner of the stadium behind the stands from the first base line is a carousel where guests ride on tigers instead of horses. The flagpole located between center and left fields was originally in play, as was the flag pole in Tiger Stadium. However, the left field wall was moved in front of the pole before the 2003 season. A ball that hits the pole is now ruled a home run. The right field of the stadium features the Pepsi Porch that has been graced by home runs from only the best lefty batters. This area also features "Kaline's Corner", a seating area in honor of Hall of Fame right fielder Al Kaline.

An LED scoreboard was added to the right-center field wall, and the upper deck fascia for the 2007 season. 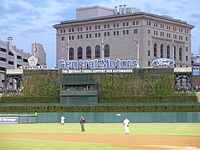 The fountain in center field was updated for the 2009 season to include Ford and Chrysler. In 2010 it was renamed the Chevrolet Fountain. The Detroit Athletic Club shown in the background.

A giant fountain behind center field is set off whenever the Tigers score, and also between innings, with bursts of water also referred to as Liquid Fireworks. The water show is also played pregame and postgame, and can be set to music. General Motors sponsored the fountain and held the naming rights from 2000-2008. Two GM vehicles were placed atop the fountain during that time. For the 2009 season, the fountain sponsorship was dropped by GM, due to their financial trouble. The Tigers decided to keep the General Motors logo on the fountain however, and also added the logos of Chrysler and Ford, with the statement "The Detroit Tigers Support Our Automakers". In 2010, GM again sponsored the fountain, renaming it the Chevrolet Fountain.

Comerica Park primarily serves as the home ballpark for the Detroit Tigers, who moved to the venue from Tiger Stadium in 2000.

In 2005, Comerica Park hosted the 76th MLB All-Star Game, the first to be played in Detroit since 1971. In the Home Run Derby, held the day before, Bobby Abreu slammed 24 home runs in the first round, breaking the previous record of 15. Abreu won the Derby over Tiger Iván Rodríguez and hit a record 41 homers during the event. In the All-Star Game, the American League won 7–5 with Miguel Tejada winning the game's MVP award.

On October 21, 2006, Comerica Park hosted the first World Series game in the history of the ballpark (Game 1 of the 2006 World Series).

On June 12, 2007, the first no hitter was thrown at Comerica Park by Justin Verlander. The Tigers won the game 4–0 against the Milwaukee Brewers. It was also the first no hitter thrown by a Tiger in the city of Detroit since Virgil Trucks accomplished the feat in 1952.

On May 24, 2008, the Tiger statue at the main entrance to the ballpark was dressed with a Detroit Red Wings jersey as the Red Wings were playing against the Pittsburgh Penguins in the Stanley Cup Finals during that time. Detroit defeated Pittsburgh in 6 games for the Stanley Cup. The jersey is usually worn by the Spirit of Detroit, but was undergoing restoration during that time.[5] On April 29, 2009 in a game between the Tigers and New York Yankees a fire alarm went off in the eight inning. The scoreboard told fans to evacuate the ballpark without using the elevators. Players were about to be called off the field but home plate umpire Brian Runge checked with Tigers' manager Jim Leyland, who called the field security to confirm it was a false alarm. Fans returned to their seats. Yankees reliever Phil Coke, who had retired Curtis Granderson to start the inning, retired the side with no runs allowed. The Tigers then rallied for 5 runs in the ninth but the Yankees hung on to win 8-6.

Comerica Park has played host to major recording acts in concert such as Eminem (2005), The Rolling Stones (2005), Bruce Springsteen and the E Street Band (2003), Bon Jovi (2003) and Paul McCartney (2011). The first act to play the venue was the Dave Matthews Band in the summer of 2000. In full-stage shows, the stage is to the back of the center field grass with fan seating on the grass up to, but not on, the infield diamond. No seating is allowed on the infield diamond. The center field grass has been covered by special tiles during concerts. Tiger players and former manager Alan Trammell complained about the quality of the playing outfield in 2005 after successive concerts by Eminem and The Rolling Stones; however, concerts at the venue are popular for Detroiters since Comerica is one of the only outdoor concert venues in the city of Detroit, along with Chene Park and the DTE Energy Music Theatre in Clarkston, Michigan, approximately 40 miles (64 km) north of Detroit. On July 27, 2007, Comerica hosted a stop of the 2007 Vans Warped Tour. Since then, Comerica become the annual stop of Detroit for The Warped Tour. Bands perform in the parking lot while merchandise and food vendors set up in the park itself. Comerica hosts the festival Kid Rock with Lynyrd Skynyrd and Robert Randolph and the Family Band performed at Comerica July 17, 2009. Kid Rock added a second night show for the 18th that featured Alice in Chains and Cypress Hill as opening acts. On August 15, 2003, a concert co-headlined by Kiss and Aerosmith and featuring local favorite Ted Nugent and Saliva had been planned for Comerica Park, but was postponed due to the Northeast Blackout of 2003 the day before; the rescheduled concert took place on September 7. Eminem and Jay-Z performed at Comerica Park on September 2, 2010, and a second show on September 3, 2010. On July 24, 2011 the stadium hosted a concert featuring Paul McCartney on his On the Run Tour.[6]