After spending seven seasons in minor league baseball in the Indians and Brewers organizations, and two seasons with the Mets as a backup, Scutaro landed a starting second baseman position after Mark Ellis had a season-ending shoulder injury during 2004 spring training. Scutaro was also in the 2005 documentary film "A Player to Be Named Later" which followed various players from Indianapolis Indians, the Triple-A affiliate of the Milwaukee Brewers, for one season. 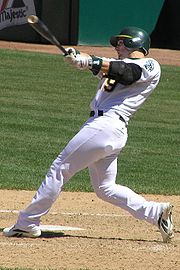 Scutaro batting for the Athletics in 2005.

While in the minors with the Triple-A Indianapolis Indians in 2001, Scutaro was one of four players profiled in the documentary film "A Player To Be Named Later".

Because of his Italian heritage [1], Scutaro was given the option of playing for either Italy or Venezuela in the 2006 World Baseball Classic. He chose to play for Venezuela as a utility infielder.

On November 18, 2007, Scutaro was traded to the Toronto Blue Jays for minor league pitchers Kristian Bell and Graham Godfrey.[2]

Scutaro was the Jays' third baseman for at least a month, after a finger injury sustained by teammate Scott Rolen, and then returned to a starter's role after an injury to David Eckstein in his right hip flexor suffered on May 6. Shortly after Eckstein's return, David and Blue Jays teammate, Aaron Hill collided trying to catch a fly ball. Hill suffered from concussion-like symptoms and Scutaro filled in at second base. 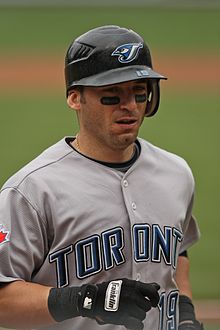 Scutaro during his tenure with the Blue Jays in 2009.

On December 3, 2009, Scutaro agreed to a two-year, $11 million deal with the Boston Red Sox. The deal also includes a third-year mutual option.[3] On April 12, 2010, Scutaro recorded the first hit in Target Field history on a single up the middle in the first inning off Twins starter Carl Pavano. Soon after, he was caught stealing second base, making him the first out recorded at the Twins' new ballpark. In his first season with the team, Scutaro set a number of career highs, including games (150), at-bats (632), hits (174) and doubles (38) while suffering for much of the season with a right shoulder injury which forced him out of practice.[4]