Clay Daniel Buchholz (born August 14, 1984 in Nederland, Texas) pitches for the Boston Red Sox of major league baseball. On September 1, 2007, in just his second major league start, he recorded a no-hitter against the Baltimore Orioles, becoming the third MLB pitcher since 1900 to throw a no-hitter in his first or second start.[1] He is the first Red Sox rookie and 17th Red Sox pitcher to pitch a no-hitter.[1]

Raised in Lumberton, Texas, Buchholz played baseball for the local youth baseball leagues, and then for the Lumberton High School Raiders.

Buchholz began his college career in 2004 at McNeese State University. Also that year, he and a hometown friend were arrested for stealing 29 laptop computers from Lumberton Intermediate School, selling many to other students at McNeese.[2] Buchholz later expressed regret, saying "That was a mistake. I was hanging out with the wrong person. But I think it helped me out in the long run."[3][4] He was subsequently dismissed from the McNeese baseball team.

Buchholz then transferred to Angelina College. In 2005, while competing for the Roadrunners, Buchholz appeared in 15 games, winning 12 and losing 1.[5] His 1.05 ERA, seven complete games, and 129 strikeouts all stand as team records (through the 2010 season). He was also named an All-American in 2005.[6]

Buchholz was drafted by the Red Sox in the supplemental first round of the 2005 draft. The Red Sox obtained their supplemental pick, the 42nd overall, as compensation for losing free agent Pedro Martínez to the New York Mets.[5]

Buchholz pitched 41 1/3 innings for the Lowell Spinners of the New York-Penn League, compiling a record of 0–1 with 45 strikeouts in fifteen starts. He then pitched for the Wilmington Blue Rocks (Single A-Advanced) and the Greenville Drive (Single A). Between the two teams, Buchholz struck out 140 and walked 33 in 119 innings while going 11–4.

Buchholz started his first spring training game in 2007 against the Tampa Bay Rays. He pitched 4.2 innings, gave up seven hits and three runs, and recorded three strikeouts. While competing for the Portland Sea Dogs in 2007, Buchholz played in fifteen games, winning 7 and losing 2. His success led him to be chosen to play in the All-Star Futures Game at AT&T Park.

Buchholz made his MLB debut with the Boston Red Sox against the Los Angeles Angels of Anaheim on August 17, 2007 at Fenway Park. The Sox won the game 8–4 and he picked up the win, going six innings and giving up four runs (three earned). After the game, however, Buchholz was sent back down to the Sox' Triple-A team in Pawtucket. "I got my feet wet," he said to a reporter. "I hope I can come back in September and help out."[7] Before Buchholz' first major league start, Red Sox manager Terry Francona said: "This kid can come up and pitch a no-hitter, and he's going to go back down... If he throws a no-hitter I may send him back with a present. But he's going back."[8]

In Buchholz's second major league start on September 1, 2007, he became the first Boston Red Sox rookie to throw a no-hitter when he blanked the Baltimore Orioles 10–0. He threw 115 pitches, struck out nine, walked three, and hit Nick Markakis.[9] After the game, Buchholz told the media, "It's amazing. That's all I can say ... I'm in a blur right now." According to the Elias Sports Bureau, Buchholz became the third pitcher since 1900 to pitch a no-hitter in his first or second major league start. Bobo Holloman did it in his first start on May 6, 1953, for the St. Louis Browns at home against the Philadelphia Athletics, and Wilson Alvarez did it in his second start on Aug. 11, 1991, for the Chicago White Sox at Baltimore.[9] Buchholz became the eleventh Red Sox pitcher to throw a no hitter in Fenway Park history, and the seventeenth[10] in Red Sox history.

Following the game, general manager Theo Epstein and manager Terry Francona each independently confirmed that they had spoken by phone to each other in the seventh and eighth innings concerning Buchholz' pitch count. He had not thrown more than 98 pitches in a game all year, and was threatening to significantly exceed that total if he finished the game. Epstein reported that in no way would Buchholz have been allowed to face a batter after reaching 120 pitches, expressing concern about excessive pitches potentially damaging such a young and inexperienced arm. Buchholz finished the game with 115 pitches, allowing Francona to escape what would have been an unpleasant decision to remove a pitcher from the game in which he was throwing a no-hitter.[11]

Buchholz' no-hitter was the third of a record-setting four caught by Jason Varitek. The first two were for Hideo Nomo and Derek Lowe (in which the final score was also 10–0); the fourth was Jon Lester's on May 19, 2008, against the Kansas City Royals, which was also the first no-hitter in major league play after Buchholz'.

Buchholz pitched in two more games after the no-hitter, earning a win while pitching three innings of relief at Baltimore on September 6,[12] and taking a loss after a start of 4.2 innings at Toronto on September 19.[13]

With a season total of 22 innings pitched, Red Sox management made a decision to end Buchholz' season and not include him on any of the team's post-season rosters,[14] as they went on to win the World Series. 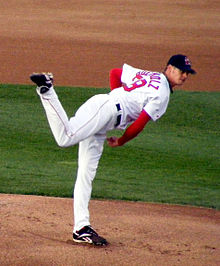 Buchholz pitching for the Portland Sea Dogs, Double-A affiliates of the Boston Red Sox on August 25, 2008.

Red Sox pitching coach John Farrell stated that Buchholz would most likely be in line for 180–190 innings in the 2008 season.[15] On May 15, Buchholz was placed on the 15-day disabled list as the result of a torn fingernail.[16] He was sent to Pawtucket following the injury, and remained there for several weeks to work on his fastball. On July 11, he was recalled to Boston and was part of their regular pitching rotation, though he did not record a single win after his return. On August 20, 2008, as the Red Sox were trying to sweep the Orioles, the team that Buchholz had no-hit last year, he gave up a 4–0 lead by allowing three runs in the second inning, and two more in the third. He was removed after only pitching 2.1 innings. In his previous start, he had only lasted three innings. In 2008, the Red Sox were 3–12 in Buchholz' fifteen starts. After the game, Buchholz was sent down to Double-A Portland. Buchholz stated "I've never had a streak like this," and "I've never been one to say the pressure was too much for me, but I've felt like I've had a lot of weight on my shoulders just trying to be perfect and trying to do everything as well as I could to help this team win".[17] Following the 2008 season, Buchholz pitched in the Arizona Fall League.

In his eighth start at Pawtucket in 2009, Buchholz took a perfect game into the ninth inning against the Louisville Bats, but it was broken up after a leadoff single; ultimately, he pitched a one-hit shutout.[19]

After a July 12 win before the All Star break, Red Sox manager Terry Francona announced that Buchholz would be activated to pitch against the Toronto Blue Jays on July 17, in order to give more time off to the starters who were in the All Star game.[20] Buchholz went on to win the game, pitching five and two thirds innings, allowing four hits with one run, while walking three and striking out three. It was his first major league win since May 2, 2008.

The Red Sox pitching staff floundered in the second half of the year. Wakefield, Beckett and Lester were the only dependable starters in the first half (John Smoltz, Daisuke Matsuzaka and Brad Penny all had losing records). While Jon Lester remained effective in the second half, Josh Beckett began to struggle, and when All-Star Tim Wakefield was placed on the Disabled List, Buchholz replaced him in the rotation. Buchholz's pitching down the stretch was a large part of keeping the Red Sox afloat and helped them make it into the playoffs (along with a strong return from Matsuzaka). He finished the season 7–4 with a 4.21 ERA and 68 strikeouts in 16 starts.

Buchholz delivered a strong first half of the 2010 season. On the strength of his 10–4 record, and a 2.45 ERA, he was selected to the American League All-Star Team. In the month of June, Buchholz went 3–1 with just a 1.84 ERA, including a 5-hit shutout at Baltimore on June 4.[21] On the road in the season's first half, he went 5–1 with a 1.70 ERA. Though earning a spot on the roster, Buchholz was not called upon to pitch in the All-Star Game; he pulled a hamstring June 26 during an interleague game against the San Francisco Giants and was on the disabled list.

He made his first start after his stint on the DL on July 21, 2010 against Gio Gonzalez of the Oakland Athletics. He pitched 4 innings, giving up five earned runs, with two strikeouts and three walks in a 6–4 loss. Buchholz returned to his pre-injury form after the start in Oakland by going 4–0 in August with a 1.03 ERA and winning the AL pitcher of the month award. Buchholz finished the season with a 17–7 record and 2.33 ERA.

Buchholz began the season as the number three starter in the Red Sox rotation. On April 10, Buchholz signed a 4-year contract extension, worth nearly $30 million.[22] He went on the disabled list in June and in August it was reported that he would miss the rest of the season with a stress fracture in his back.[23]

Buchholz throws a four-seam fastball, a two-seam fastball, a slider that he refers to as a cutter, a 12-6 curveball, and a straight changeup. His changeup and 12-6 curveball are considered elite pitches. Over the course of the season, Buchholz typically throws his fastball 92–94 mph, although towards the end of the 2006 season, his fastball regularly hit 95 or 96 mph. His changeup has a velocity of 79–82 mph. Buchholz also played outfield at Angelina College. In 2009 Buchholz has shown flashes of being able to establish command of his fastball and it presently sits in the 93–95 mph range.[24]

Buchholz has regularly supported the Jimmy Fund charity while a Red Sox. In November 2006, when he was Red Sox minor-league pitcher of the year, Buchholz was announced as a member of the New Stars for Young Stars team. In 2010, he was named Jimmy Fund Co-captain with Tim Wakefield. He signed on for the same role in 2011. He and Wakefield are the 2011 Spokesplayers for the Rally Against Cancer. [25]

In March 2011, he partnered with Charity Wines to release his own wine label under the Longball Cellars brand. Proceeds from sales of his ChardonClay chardonnay support the Jimmy Fund and Dana-Farber. He partners with teammate Jon Lester, who is also releasing a Charity Wine, called CabernAce, to raise money for the Hutchinson Cancer Research Center.[26]

He is related to New York Mets pitcher Taylor Buchholz.[29]