On July 31, 2007, Murphy was traded to the Texas Rangers in a package that sent relief pitcher Eric Gagné to Boston. 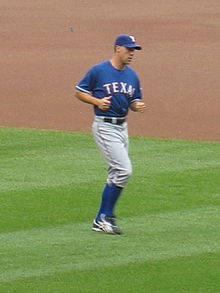 On April 25, 2008, the Rangers beat the Minnesota Twins 6–5 on Murphy's walk-off RBI single in the bottom of the 10th. It was Murphy's first career walk-off hit. On August 1, 2008, Murphy capped a 3-run rally in the bottom of the 9th, hitting a walk-off 2-RBI single off B.J. Ryan as the Rangers beat the Toronto Blue Jays 9–8. In 2009 Murphy hit a walk-off single against Houston Astros closer, Jose Valverde. On August 7, 2008, Murphy was placed on the 15-day DL after suffering a knee injury in a collision at home plate with Iván Rodríguez of the New York Yankees. Murphy did not play another game in the 2008 season, when swelling to his knee cut his attempts at rehab short.

Murphy has continued to play well for the Rangers, often in a backup role. Despite not playing every day, his clutch hitting and strong performance in the 2010 post-season made him a fan favorite.

On opening day against the Boston Red Sox, Murphy hit a go-ahead, pinch-hit two-run double in the eighth inning that put the Rangers up, 7–5. Texas went on to win that game, 9–5. Two days later, in his first start of the season, he hit a home run against Clay Buchholz.

Murphy and his wife, Andrea Hill, were married on January 1, 2005, and have two daughters.