Codex
This article is about ancient and medieval books. For other uses, see Codex (disambiguation). 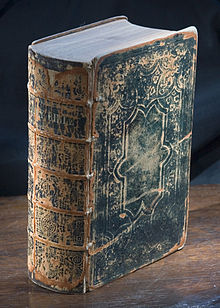 A codex (Latin caudex for "trunk of a tree" or block of wood, book; plural codices) is a book in the format used for modern books, with multiple quires or gatherings (sheets of paper or vellum in multiples of two which are folded and stitched through) typically bound together and given a cover.

Developed by the Romans from wooden writing tablets, its gradual replacement of the scroll, the dominant form of book in the ancient world, has been termed the most important advance in the history of the book prior to the invention of printing.[1] The spread of the codex is often associated with the rise of Christianity, which adopted the format for the Bible early on.[2] First described by the 1st-century AD Roman poet Martial, who praised its convenient use, the codex achieved numerical parity with the scroll around AD 300, and had completely replaced it throughout the now Christianised Greco-Roman world by the 6th century.[3]

The codex holds considerable practical advantages over other book formats, such as compactness, sturdiness, ease of reference (a codex is random access, as opposed to a scroll, which is sequential access), and especially economy; unlike the scroll, both recto and verso could be used for writing.[4] Although the change from rolls to codices roughly coincides with the transition from papyrus to parchment as favourite writing material, the two developments are quite unconnected. In fact, any combination of codices and scrolls on the one hand with papyrus and parchment on the other is technically feasible and well attested from the historical record.[5]

Although technically any modern paperback is a codex, the term is now reserved for manuscript (hand-written) books which were produced from Late Antiquity through the Middle Ages. The scholarly study of these manuscripts from the point of view of the bookbinding craft is called codicology, while the study of ancient documents in general is called paleography.

Reproduced Roman-style wax tablet, from which the codex evolved

The Romans used precursors made of reusable wax-covered tablets of wood for taking notes and other informal writings. Two ancient polyptychs, a pentatych and octotych, excavated at Herculaneum employed a unique connecting system that presages later sewing on thongs or cords.[6] At the turn of the 1st century CE, a kind of folded parchment notebook called pugillares membranei in Latin became commonly used for writing in the Roman Empire.[7] This term was used by both the pagan poet Martial and the Christian apostle Paul. Martial used the term with reference to gifts of literature exchanged by Romans during the festival of Saturnalia. According to T.C. Skeat “…in at least three cases and probably in all, in the form of codices" and he theorized that this form of notebook was invented in Rome and then “…must have spread rapidly to the Near East…”[8] In his discussion of one of the earliest pagan parchment codices to survive from Oxyrhynchus in Egypt, Eric Turner seems to challenge Skeat’s notion when stating “…its mere existence is evidence that this book form had a prehistory” and that “early experiments with this book form may well have taken place outside of Egypt.”[9] Early codices of parchment or papyrus appear to have been widely used as personal notebooks, for instance in recording copies of letters sent (Cicero Fam. 9.26.1). The pages of parchment notebooks were commonly washed or scraped for re-use, called a palimpsest; and consequently writings in a codex were considered informal and impermanent.

As far back as the early 2nd century, there is evidence that the codex—usually of papyrus—was the preferred format among Christians: in the library of the Villa of the Papyri, Herculaneum (buried in AD 79), all the texts (Greek literature) are scrolls (see Herculaneum papyri); in the Nag Hammadi "library", secreted about AD 390, all the texts (Gnostic Christian) are codices. Despite this comparison, a fragment of a non-Christian parchment Codex of Demosthenes, De Falsa Legatione from Oxyrhynchus in Egypt demonstrates that the surviving evidence is insufficient to conclude whether Christians played a major, if not central, role in the development of early codices, or if they simply adopted the format to distinguish themselves from Jews. The earliest surviving fragments from codices come from Egypt and are variously dated (always tentatively) towards the end of the 1st century or in the first half of the 2nd. This group includes the Rylands Library Papyrus P52, containing part of St John's Gospel, and perhaps dating from between 125 and 160.[10] 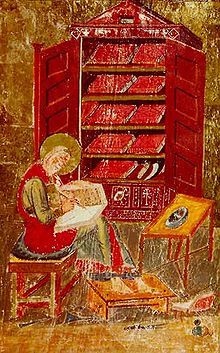 In Western culture the codex gradually replaced the scroll. From the 4th century, when the codex gained wide acceptance, to the Carolingian Renaissance in the 8th century, many works that were not converted from scroll to codex were lost to posterity. The codex was an improvement over the scroll in several ways. It could be opened flat at any page, allowing easier reading; the pages could be written on both front and back (recto and verso); and the codex, protected within its durable covers, was more compact and easier to transport.

The codex also made it easier to organize documents in a library because it had a stable spine on which the title of the book could be written. The spine could be used for the incipit, before the concept of a proper title was developed, during medieval times.

Although most early codices were made of papyrus, papyrus was fragile and supplies from Egypt, the only place where papyrus grew and was made into paper, became scanty; the more durable parchment and vellum gained favor, despite the cost.

Aztec warriors as shown in the Florentine Codex.

The codices of pre-Columbian Mesoamerica had the same form as the European codex, but were instead made with long folded strips of either fig bark (amatl) or plant fibers, often with a layer of whitewash applied before writing. New World codices were written as late as the 16th century (see Maya codices and Aztec codices). Those written before the Spanish conquests seem all to have been single long sheets folded concertina-style, sometimes written on both sides of the local amatl paper. So, strictly speaking they are not in codex format, but they more consistently have "Codex" in their usual names than do other types of manuscript.

In the Far East, the scroll remained standard for far longer than in the West. There were intermediate stages, such as scrolls folded concertina-style and pasted together at the back and books that were printed only on one side of the paper.[11] The Jewish religion still retains the Torah scroll, at least for ceremonial use.

Among the experiments of earlier centuries, scrolls were sometimes unrolled horizontally, as a succession of columns. (The Dead Sea Scrolls are a famous example of this format.) This made it possible to fold the scroll as an accordion. The next step was then to cut the folios, sew and glue them at their centers, making it easier to use the papyrus or vellum recto-verso as with a modern book. In traditional bookbinding, these assembled folios trimmed and curved were called "codex" in order to differentiate it from the "case" which we now know as "hard cover". Binding the codex was clearly a different procedure from binding the "case". This terminology, still in use some 50 or 60 years ago,[citation needed] has been nearly abandoned. Some commercial bookbinders may refer to the cover and the inside of the book instead, but a few others[who?], attached to their traditions, still use the terms "codex" and "case".