Miles was the name used to market the aircraft of British engineer Frederick George Miles, who designed numerous light civil and military aircraft and a range of curious prototypes. The name "Miles" is associated with two distinct companies that Miles was involved in and is also attached to several designs produced before there was a company trading under Miles' name.

The original company was founded by Charles Powis and Jack Phillips as Philips and Powis Aircraft after meeting Fred Miles. The company was based on Woodley Aerodrome in Woodley, near the town of Reading and in the county of Berkshire.

In 1936 Rolls-Royce bought into the company and although aircraft were produced under the Miles name, it was not until 1943 that the firm became Miles Aircraft Limited when Rolls-Royce's interests were bought out. In 1947 the company entered receivership and the aviation assets were purchased by Handley Page as Handley Page Reading. Handley Page produced the Miles-designed M.60 Marathon as the H.P.R.1 Marathon. The Miles Aeronautical Technical School was taken over by the Reading Technical College. Other products in which Miles had interests, including photocopiers, and bookbinding machinery were taken over by a specifically formed company, the Western Manufacturing Estate Ltd, the name Western referring to its location on the Woodley aerodrome. This company later merged with the Adamant Engineering Company Ltd to form the Adwest Group. Miles also manufactured Biro pens through an associated company, the Miles Martin Pen Co Ltd.

In 1948, Frederick Miles founded F. G. Miles Limited who continued to produce aircraft under the Miles name. The company was based on two sites, Redhill aerodrome and Shoreham aerodrome. The aviation interests later merged with Auster Aircraft Limited into British Executive and General Aviation Limited (Beagle Aircraft) in 1961 initially as Beagle-Miles Ltd with George Miles as Chief Designer and Technical Director.[1] The company adopted a group structure as follows: Meridian Airmaps, Ltd., F. G. Miles technical publications department, Miles Development Products, Ltd., Miles Electronics, Ltd., Miles Plastics, Ltd. This company was based initially at Redhill but moved to Shoreham in 1953,[2] and Marketad Ltd[3] Miles Electronics was involved in the manufacture of flight simulators, this division merged with the UK arm of the Link Trainer flight simulator company and was later acquired by the Singer Corporation before being sold to a Florida based company – Biocoastal Corp. in 1988. Other companies in this grouping included FG Miles Engineering Ltd and Miles HiVolt Ltd. and Miles-Dufon Ltd Design work between F. G. Miles, Ltd., and the French company Hurel-Dubois resulted in the HDM.105, basically a standard Miles Aerovan fitted with an Hurel-Dubois high-aspect-ratio wing. This work led to the Hurel-Duois HD.34 and the Short Brothers Skyvan series of aircraft.

Miles Master trainer in flight during the Second World War. 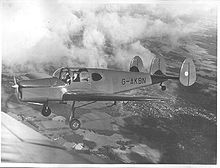 Their aircraft include the Hawk Trainer and its military variant, the Magister, as well as the Messenger and the Gemini. During the Second World War they produced the Master advanced trainer, as well as the Martinet and Monitor target tugs.

The aircraft designed by Miles were often technologically and aerodynamically advanced for their time; the M.20 emergency production fighter prototype outperformed contemporary Hawker Hurricanes and Spitfires, despite having fixed landing gear. The X Minor was a flying testbed for blended wing-fuselage designs, though the large commercial transport intended to be produced from this research never entered production. The gigantic Miles X Airliner was to seat 55 and have eight engines buried in the wing, driving four sets of contra-rotating props and a range of 3,450 miles.[4]

The Miles Libellula were tandem-wing designs for a fighter and a bomber. Having two wings, one each end of the aircraft, movements of the centre of gravity due to fuel or ammunition use were less of a problem.

The world's first supersonic jet aircraft, the Miles M.52, was nearly completed. The Miles M.52 influenced the design of the Bell X-1. A recent BBC documentary on the history of supersonic flight told how the British Air Ministry cancelled the M.52 project and ordered Miles to hand over all data to the Bell Corporation.[5]

The following table lists the company number, name, year of first flight and number produced of all Miles aircraft.