Born in Mumpf, Rheinfelden, Aargau, the daughter of Jewish Alsatian peddlers, Rachel earned money as a child singing and reciting in the streets. She wanted to become a famous French actress so she came to Paris around the year of 1830, and took elocution and singing lessons, eventually studying under the instruction of the musician Alexandre-Étienne Choron and of Saint-Aulaire, and taking dramatic arts classes at the Conservatoire. To provide for the needs of her family she debuted in La Vendéenne in January 1837 at the Théâtre du Gymnase. Delestre-Poirson, the director, gave her the stage name Rachel, a name that she chose to keep in her private life. Auditioning in March 1838, she started at the Théâtre-Français in Pierre Corneille's Horace at the age of 17. At this time she began a long liaison with Louis Véron, the former director of the Paris Opera, and subsequently her personal life was a subject of gossip, well documented by biographers and acquaintances of the time.

Her fame spread throughout Europe following a sensational success in London in 1841, and became particularly associated with the works of Racine, Voltaire, and Corneille, touring in Brussels, Berlin, and St. Petersburg. She created the title role in Eugène Scribe's Adrienne Lecouvreur. Her acting style was characterized by clear diction and economy of gesture, and represented a major change from the exaggerated style of those days. She was best known for her portrayal of the title rôle in Phèdre. Eliza Rachel, as the actress was also known, was reportedly a great tragédienne. 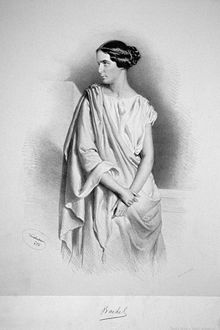 She became the mistress of Napoleon I's son, Alexandre Joseph Count Colonna-Walewski, and together they had a son Alexandre Colonna-Walewski in 1844. He entered the diplomatic service and died at his post in Turin in 1898. After an affair with Arthur Bertrand, Rachel left for England. There she briefly had an affair with Louis Napoleon Bonaparte, later Napoleon III, as well as with Napoléon Joseph Charles Paul Bonaparte. Her second son, Gabriel-Victor Felix, was never acknowledged by Bertrand. He became a navy man and died in the Congo in 1889.

Rachel never married, although she had many lovers. When Walewski upbraided her for not remaining faithful to him, she retorted, "I am as I am; I prefer renters to owners."

Her health declined after a long tour of Russia. She died of tuberculosis in Le Cannet, Alpes-Maritimes, France. She is buried in a mausoleum in the Jewish part of Père Lachaise Cemetery. The English theatre critic James Agate published a biography of her in 1928, which echoes the anti-Semitism of his day.[1] A modern account of her life and legacy by Rachel Brownstein was published in 1995.[2]

The character Vashti in Charlotte Brontë's novel Villette was based on Rachel, whom Brontë had seen perform in London.

Rachel, a light tannish colour, primarily for face-powder used in artificial light, is named after her; the raschel knitting-machine is according to the OED also named after her.[3]

At the Théâtre Français: 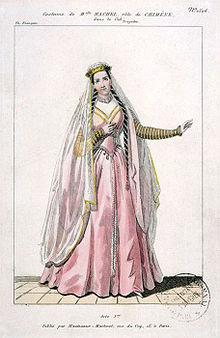 Rachel as Chimène in Le Cid by Corneille 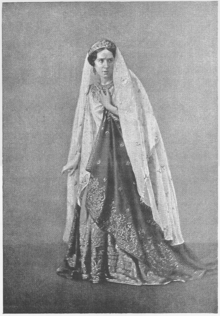 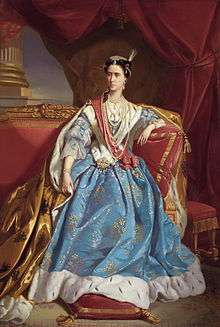 Rachel is buried in Père Lachaise Cemetery. There is also a street in Paris named after her: Avenue Rachel (at number 20 is the entrance to Montmartre Cemetery).

This article relies heavily on the French wiki of the same name, from which this was partially translated in May 2006. 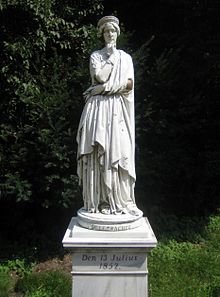 Sculpture of Rachel in Berlin's Pfaueninsel