Pierre Corneille (French pronunciation: [pjɛːʁ kɔʁ.nɛj]) (6 June 1606 – 1 October 1684) was a French tragedian who was one of the three great seventeenth-century French dramatists, along with Molière and Racine. He has been called “the founder of French tragedy” and produced plays for nearly forty years.

Corneille at the Louvre.

Corneille was born at Rouen, France, to Marthe le Pesant de Boisguilbert and Pierre Corneille, a distinguished lawyer.[1] He was given a rigorous Jesuit education at the then named Collège de Bourbon[2] which has been known as the Lycée Pierre Corneille since 1873. At 18 he began to study law but his practical legal endeavors were largely unsuccessful. Corneille’s father secured two magisterial posts for him with the Rouen department of Forests and Rivers. During his time with the department he wrote his first play. It is unknown exactly when he wrote it, but the play, the comedy Mélite, surfaced when Corneille brought it to a group of traveling actors in 1629. The actors approved of the work and made it part of their repertoire. The play was a success in Paris and Corneille began writing plays on a regular basis. He moved to Paris in the same year and soon became one of the leading playwrights of the French stage. His early comedies, starting with Mélite, depart from the French farce tradition by reflecting the elevated language and manners of fashionable Parisian society. Corneille describes his variety of comedy as "une peinture de la conversation des honnêtes gens" ("a painting of the conversation of the gentry"). His first true tragedy is Médée, produced in 1635.

The year 1634 brought more attention to Corneille. He was selected to write verses for the Cardinal Richelieu’s visit to Rouen. The Cardinal took notice of Corneille and selected him to be among Les Cinq Auteurs (“The Five Poets”; also translated as “the society of the five authors”). The others were Guillaume Colletet, Boisrobert, Jean Rotrou, and Claude de L'Estoile.

The five were selected to realize Richelieu's vision of a new kind of drama that emphasized virtue. Richelieu would present ideas, which the writers would express in dramatic form. However, the Cardinal's demands were too restrictive for Corneille, who attempted to innovate outside the boundaries defined by Richelieu. This led to contention between playwright and employer. After his initial contract ended, Corneille left Les Cinq Auteurs and returned to Rouen.

In the years directly following this break with Richelieu, Corneille produced what is considered his finest play. Le Cid (al sayyid in Arabic; roughly translated as 'The Lord'), is based on the play Mocedades del Cid (1621) by Guillem de Castro. Both plays were based on the legend of Rodrigo Díaz de Vivar (nicknamed 'El Cid Campeador'), a military figure in Medieval Spain.

The original 1637 edition of the play was subtitled a tragicomedy, acknowledging that it intentionally defies the classical tragedy/comedy distinction. Even though Le Cid was an enormous popular success, it was the subject of a heated argument over the norms of dramatic practice, known as the Querelle du Cid or The Quarrel of Le Cid. Cardinal Richelieu's Académie Française acknowledged the play's success, but determined that it was defective, in part because it did not respect the classical unities of time, place, and action (Unity of Time stipulated that all the action in a play must take place within a twenty-four hour time-frame; Unity of Place, that there must be only one setting for the action; and Unity of Action, that the plot must be centred around a single conflict or problem). The newly-formed Académie was a body that asserted state control over cultural activity. Although it usually dealt with efforts to standardize the French language, Richelieu himself ordered an analysis of Le Cid.

Accusations of immorality were leveled at the play in the form of a famous pamphlet campaign. These attacks were founded on the classical theory that the theatre was a site of moral instruction. The Académie's recommendations concerning the play are articulated in Jean Chapelain's Sentiments de l'Académie française sur la tragi-comédie du Cid (1638). Even the prominent writer Georges de Scudéry harshly criticized the play in his Observations sur le Cid (1637). The intensity of this "war of pamphlets" was heightened severely by Corneille's boastful poem Excuse À Ariste, in which he rambled and boasted about his talents, while Corneille claimed no other author could be a rival. These poems and pamphlets were made public, one after the other, as once 'esteemed' playwrights traded slanderous blows. At one point, Corneille took several shots at criticizing author Jean Mairet's family and lineage. Scudéry, a close friend of Mariet at the time, did not stoop to Corneille's level of 'distastefulness', but instead continued to rail Le Cid and it's violations. Scudéry even stated of Le Cid that, "almost all of the beauty which the play contains is plagiarized."

This "war of pamphlets" eventually influenced Richelieu to call up the French Academy (Académie Française) and analyze the play. In their final conclusions, the Academy ruled that even though Corneille had attempted to remain loyal to the unity of time, Le Cid broke too many of the unities to be a valued piece of work.

The controversy, coupled with the Academy's ruling proved too much for Corneille, who decided to return to Rouen. When one of his plays was reviewed unfavorably, Corneille was known to withdraw from public life. He remained publicly silent for sometime, however privately, he was said to be "troubled and obsessed by the issues, making numerous revisions to the play."

Response to the Querelle du Cid

After a hiatus from the theater, Corneille returned in 1640. The Querelle du Cid caused Corneille to pay closer attention to classical dramatic rules. This was evident in his next plays, which were classical tragedies: Horace (1640, dedicated to Richelieu), Cinna (1643), and Polyeucte (1643). These three plays and Le Cid are collectively known as Corneille's 'Classical Tetralogy'. Corneille also responded to the criticisms of the Académie by making multiple revisions to Le Cid to make it closer to the conventions of classical tragedy. The 1648, 1660, and 1682 editions were no longer subtitled ‘tragicomedy’, but ‘tragedy’. 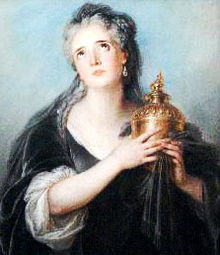 Adrienne Lecouvreur, as Cornelia in "The Death of Pompey"

Corneille’s popularity grew and by the mid 1640s, the first collection of his plays was published. Corneille married Marie de Lampérière in 1641. They had seven children together. In the mid to late 1640s, Corneille produced mostly tragedies: La Mort de Pompée (The Death of Pompey, performed 1644), Rodogune (performed 1645), Théodore (performed 1646), and Héraclius (performed 1647). He also wrote one comedy in this period: Le Menteur (The Liar, 1644).

In 1652, the play Pertharite met with poor critical reviews and a disheartened Corneille decided to quit the theatre. He began to focus on an influential verse translation of the Imitation of Christ by Thomas à Kempis, which he completed in 1656. After an absence of nearly eight years, Corneille was persuaded to return to the stage in 1659. He wrote the play Oedipe, which was favored by Louis XIV. In the next year, Corneille published Trois discours sur le poème dramatique (Three Discourses on Dramatic Poetry), which were, in part, defenses of his style. These writings can be seen as Corneille’s response to the Querelle du Cid. He simultaneously maintained the importance of classical dramatic rules and justified his own transgressions of those rules in Le Cid. Corneille argued the Aristotelian dramatic guidelines were not meant to be subject to a strict literal reading. Instead, he suggested that they were open to interpretation. Although the relevance of classical rules was maintained, Corneille suggested that the rules should not be so tyrannical that they stifle innovation.

Even though Corneille was prolific after his return to the stage, writing one play a year for the 14 years after 1659, his plays did not have the same success as those of his earlier career. Other writers were beginning to gain popularity. In 1670 Corneille and Jean Racine, one of his dramatic rivals, were challenged to write plays on the same incident. Each playwright was unaware that the challenge had also been issued to the other. When both plays were completed, it was generally acknowledged that Corneille’s Tite et Bérénice (1671) was inferior to Racine’s play (Bérénice). Molière was also prominent at the time and Corneille even composed the comedy Psyché (1671) in collaboration with him (and Philippe Quinault). Most of the plays that Corneille wrote after his return to the stage were tragedies. They included La Toison d'or (The Golden Fleece, 1660), Sertorius (1662), Othon (1664), Agésilas (1666), and Attila (1667).

Corneille’s final play was the tragedy Suréna (1674). After this, he retired from the stage for the final time and died at his home in Paris in 1684. His grave in the Église Saint-Roch went without a monument until 1821.