A weighting filter is used to emphasise or suppress some aspects of a phenomenon compared to others, for measurement or other purposes.

In each field of audio measurement, special units are used to indicate a weighted measurement as opposed to a basic physical measurement of energy level. For sound, the unit is the phon (1 kHz equivalent level).

In the measurement of loudness, for example, an A-weighting filter is commonly used to emphasize frequencies around 3–6 kHz where the human ear is most sensitive, while attenuating very high and very low frequencies to which the ear is insensitive. The aim is to ensure that measured loudness corresponds well with subjectively perceived loudness. A-weighting is only really valid for relatively quiet sounds and for pure tones as it is based on the 40-phon Fletcher-Munson equal-loudness contour. The B and C curves were intended for louder sounds (though they are less used) while the D curve is used in assessing loud aircraft noise (IEC 537).

In the field of telecommunications, weighting filters are widely used in the measurement of electrical noise on telephone circuits, and in the assessment of noise as perceived through the acoustic response of different types of instrument (handset). Other noise-weighting curves have existed, e.g. DIN standards. The term psophometric weighting, though referring in principle to any weighting curve intended for noise measurement, is often used to refer to a particular weighting curve, used in telephony for narrow-bandwidth voiceband speech circuits.

A-weighted decibels are abbreviated dB(A) or dBA. When acoustic (calibrated microphone) measurements are being referred to, then the units used will be dB SPL (sound pressure level) referenced to 20 micropascals = 0 dB SPL. dBrn adjusted is a synonym for dBA.

The A-weighting curve has been widely adopted for environmental noise measurement, and is standard in many sound level meters (see ITU-R 468 weighting for a further explanation).

A-weighting is also in common use for assessing potential hearing damage caused by loud noise, though this seems to be based on the widespread availability of sound level meters incorporating A-Weighting rather than on any good experimental evidence to suggest that such use is valid. The distance of the measuring microphone from a sound source is often "forgotten", when SPL measurements are quoted, making the data useless. In the case of environmental or aircraft noise, distance need not be quoted as it is the level at the point of measurement that is needed, but when measuring refrigerators and similar appliances the distance should be stated; where not stated it is usually one metre (1 m). An extra complication here is the effect of a reverberant room, and so noise measurement on appliances should state "at 1 m in an open field" or "at 1 m in anechoic chamber". Measurements made outdoors will approximate well to anechoic conditions.

A-weighted SPL measurements of noise level are increasingly to be found on sales literature for domestic appliances such as refrigerators and freezers, and computer fans. Although the threshold of hearing is typically around 0 dB SPL, this is in fact very quiet indeed, and appliances are more likely to have noise levels of 30 to 40 dB SPL. 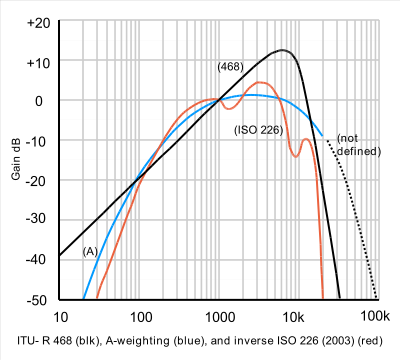 Human sensitivity to noise in the region of 6 kHz became particularly apparent in the late 1960s with the introduction of compact cassette recorders and Dolby-B noise reduction. A-weighted noise measurements were found to give misleading results because they did not give sufficient prominence to the 6 kHz region where the noise reduction was having greatest effect, and sometimes one piece of equipment would even measure worse than another and yet sound better, because of differing spectral content.

ITU-R 468 noise weighting was therefore developed to more accurately reflect the subjective loudness of all types of noise, as opposed to tones. This curve, which came out of work done by the BBC Research Department, and was standardised by the CCIR and later adopted by many other standards bodies (IEC, BSI) and, as of 2006[update], is maintained by the ITU. Noise measurements using this weighting typically also use a quasi-peak detector law rather than slow averaging. This also helps to quantify the audibility of bursty noise, ticks and pops that might go undetected with a slow rms measurement.

ITU-R 468 noise weighting with quasi-peak detection is widely used in Europe,[citation needed] especially in telecommunications, and in broadcasting particularly after it was adopted by the Dolby corporation who realised its superior validity for their purposes. Its advantages over A-weighting seem to be less well appreciated in the USA and in consumer electronics, where the use of A-weighting predominates—probably because A-weighting produces a 9 to 12 dB "better" specification, see specsmanship.[citation needed][neutrality is disputed] It is commonly used by broadcasters in Britain, Europe, and former countries of the British Empire such as Australia and South Africa.

Though the noise level of 16-bit audio systems (such as CD players) is commonly quoted (on the basis of calculations that take no account of subjective effect) as −96 dB relative to FS (full scale), the best 468-weighted results are in the region of −68 dB relative to Alignment Level (commonly defined as 18 dB below FS) i.e. −86 dB relative to FS.

The use of weighting curves is in no way to be regarded as 'cheating', provided that the proper curve is used. Nothing of relevance is being 'hidden', and even when, for example, hum is present at 50 or 100 Hz at a level above the quoted (weighted) noise floor this is of no importance because our ears are very insensitive to low frequencies at low levels, so it will not be heard. A-weighting is often used to compare and qualify ADCs, for instance, because it more accurately represents the way noise shaping hides dither noise in the ultrasonic range.

Other applications of weighting

In the measurement of gamma rays or other ionising radiation, a radiation monitor or dosimeter will commonly use a filter to attenuate those energy levels or wavelengths that cause the least damage to the human body, while letting through those that do the most damage, so that any source of radiation may be measured in terms of its true danger rather than just its 'strength'. The sievert is a unit of weighted radiation dose for ionising radiation, which supersedes the older unit the REM (roentgen equivalent man).

Weighting is also applied to the measurement of sunlight when assessing the risk of skin damage through sunburn, or when assessing the sun protection factor of sun-screen lotions. Light, UVA and UVB in sunlight have different effects, with regard to both DNA damage and melanin stimulation, depending on the wavelength of the radiation. Weighted measurements are often in SU (sun units) or DUV (Diffey weighted UV irradiance). The UV index is also used.

Another use of weighting is in television, where the red, green and blue components of the signal are weighted according to their perceived brightness. This ensures compatibility with black and white receivers, and also benefits noise performance and allows separation into meaningful luminance and chrominance signals for transmission.