Thuja occidentalis (Eastern Arborvitae, Northern Whitecedar) is an evergreen coniferous tree, in the cypress family Cupressaceae, which is widely cultivated for use as an ornamental plant known as American Arbor Vitae.[1] The endemic occurrence of this species is a northeastern distribution in North America. It is thought to be the first tree of that region to be cultivated in the area in and around Europe.

Northern whitecedars found to be growing on cliff faces in southern Ontario are the oldest trees in Eastern North America and all of Canada, growing to ages in excess of 1,653 years old.[2]

The species was first described by Carolus Linnaeus in 1753, and the name remains current. Common names include Eastern Arborvitae, American Arborvitae, Techny Arborvitae, or just Arborvitae, the last particularly in the horticultural trade. This name, arbor vitae, is derived from the tree of life motif - for the supposed medicinal properties of the sap, bark and twigs.[3] Other names by which it is known include Northern Whitecedar, Eastern Whitecedar or White Cedar, and Swamp Cedar. Thuja occidentalis trees are unrelated to cedars, or to the Australian tree, Melia azedarach, also known as White Cedar. A large number of names for cultivars are used by horticulturalists.

Thuja occidentalis grows naturally in wet forests, being particularly abundant in coniferous swamps where other larger and faster-growing trees cannot compete successfully. It also occurs on other sites with reduced tree competition such as cliffs. Although not currently listed as endangered, wild Thuja occidentalis populations are threatened in many areas by high deer numbers; deer find the soft evergreen foliage a very attractive winter food, and strip it rapidly. The largest known specimen is 34 m tall and 175 cm diameter, on South Manitou Island within Leelanau County, Michigan.

It can be a very long-lived tree in certain conditions, with notably old specimens growing on cliffs where they are inaccessible to deer and wildfire; the oldest known living specimen is just over 1,100 years old, but a dead specimen with over 1,650 growth rings has been found.[4] These very old trees are, despite their age, small and stunted due to the difficult growing conditions. The Witch Tree, a T. occidentalis growing out of a cliff face on Lake Superior in Minnesota, was described by a French explorer as being a mature tree in 1731; it is still alive today. 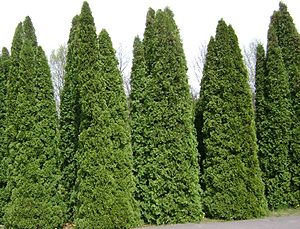 White Cedar is a tree with important uses in traditional Ojibwe culture. Honoured with the name Nookomis Giizhik ("Grandmother Cedar"), the tree is the subject of sacred legends and is considered a gift to humanity for its myriad uses. It is used in craft, construction and medicine.[5] It is one of the four plants of the Ojibwe medicine wheel, associated with the south. The foliage of Thuja occidentalis is rich in Vitamin C and is believed to be the annedda which cured the scurvy of Jacques Cartier and his party in the winter of 1535–1536.[6] Due to the neurotoxic compound thujone, internal use can be harmful if used for prolonged periods or while pregnant.

Thuja occidentalis is widely used as an ornamental tree, particularly for screens and hedges. Over 300 cultivars exist, with some of the more common ones being: 'Degroot's Spire', 'Ellwangeriana', 'Hetz Wintergreen', 'Lutea', 'Rheingold', 'Smaragd' (a.k.a. 'Emerald Green'), 'Techny', and 'Wareana'. It was introduced into Europe as early as 1540 and is widely cultivated now, especially in parks and cemeteries.

Northern white cedar is commercially used for rustic fencing and posts, lumber, poles, shingles and in the construction of log cabins,[6] White cedar is the preferred wood for the structural elements, such as ribs and planking, of birchbark canoes and the planking of wooden canoes.[7]

The essential oil within the plant has been used for cleansers, disinfectants, hair preparations, insecticides, liniment, room sprays, and soft soaps. There are some reports that the Ojibwa made a soup from the inner bark of the soft twigs. Others have used the twigs to make teas to relieve constipation and headache.[7]

In the 19th century Thuja was in common use as an externally applied tincture or ointment for the treatment of warts, ringworm and thrush.[8] "An injection of the tincture into venereal warts is said to cause them to disappear."[9]