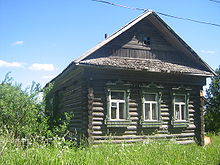 A typical Russian log cabin: Izba in the village of Kulashino in Tver Oblast 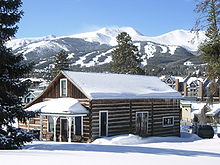 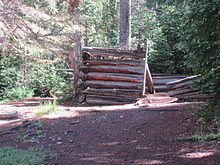 A log cabin is a house built from logs. It is a fairly simple type of log house. A distinction should be drawn between the traditional meanings of "log cabin" and "log house." Historically most "Log cabins" were a simple one- or 1½-story structures, somewhat impermanent, and less finished or less architecturally sophisticated. A "log cabin" was usually constructed with round rather than hewn, or hand-worked, logs, and often it was the first generation home building erected quickly for frontier shelter.[1]

Construction with logs was described by Roman architect Vitruvius Pollio in his architectural treatise De Architectura. He noted that in Pontus (modern-day Northeastern Turkey) dwellings were constructed by laying logs horizontally overtop of each other and filling in the gaps with "chips and mud".[2] 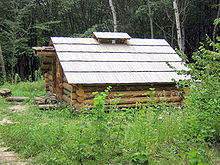 A timber-cutter's mountain log cabin at the Museum of Folk Architecture, Pyrohiv, Ukraine.

Historically log cabin construction has its roots in Scandinavia and Eastern Europe. Although their origin is uncertain, the first log structures were probably built in Northern Europe in the Bronze Age (about 3500 BC). By the time Europeans began to settle in North America, they had a long tradition of using logs for houses, barns, and other outbuildings in the Scandinavian countries, Germany, Northern Russia[3] and Ukraine.[4]

According to C. A. Weslager, whose book on log cabins is considered a classic, the Finns had a "close attunement" with the forests, and both groups had well-developed forest industries.[5] Weslager goes on to say:

The Finns were accomplished in building several forms of log housing, having different methods of corner timbering, and they utilized both round and hewn logs. Their log building had undergone an evolutionary process from the crude "pirtii"...a small gabled-roof cabin of round logs with an opening in the roof to vent smoke, to more sophisticated squared logs with interlocking double-notch joints, the timber extending beyond the corners. Log saunas or bathhouses of this type are still found in rural Finland.

By stacking tree trunks one on top of another and overlapping the logs at the corners, people made the "log cabin". They developed interlocking corners by notching the logs at the ends, resulting in strong structures that were easier to make weather-tight by inserting moss or other soft material into the joints. As the original coniferous forest extended over the coldest parts of the world, there was a prime need to keep these houses warm. The insulating properties of the solid wood were a great advantage over a timber frame construction covered with animal skins, felt, boards or shingles. Over the decades, increasingly complex joints were developed to ensure more weather tight joints between the logs, but the profiles were still largely based on the round log.
—C. A. Weslager, [5]

The Wood Museum in Trondheim, Norway, displays fourteen different traditional profiles, but a basic form of log construction was used all over North Europe and Asia. Early settlers used such methods of log building in North America. It became a popular form of construction for pioneers' settling in the far north and the more mountainous parts of United States and Canada, where winter conditions were often extreme.[6]

European settlers in the United States 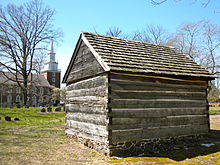 In the present-day United States, settlers first constructed log cabins in 1638. Historians believe that the first log cabins built in North America were in the Swedish colony of Nya Sverige (New Sweden) on the Delaware River in 1638, The majority of its colonists were actually Forest Finns, because Finland was part of Sweden at that time. The Swedish colony only lasted a couple of decades before it was absorbed by the Dutch colony of New Netherland, which was soon absorbed by the English. Most of the descendants of the Swedish-Finnish colony are believed to have stayed in North America.

Later German and Ukrainian immigrants also used this technique. The Scots and Scots-Irish had no tradition of building with logs, but they quickly adopted the method. The first English settlers did not widely use log cabins, building in forms more traditional to them.[1] Few log cabins dating from the 18th century still stand, but they were not intended as permanent dwellings. Possibly the oldest surviving log house in the United States is the C. A. Nothnagle Log House (ca. 1640) in New Jersey. When settlers built their larger, more formal houses, they often converted the first log cabins to outbuildings, such as chicken coops, animal shelters, or other utilitarian purposes.

When cabins were built with the intention of applying siding, the logs were usually hewed on the outside to facilitate the application of the siding. When logs were hewed on the inside as well, they were often covered with a variety of materials, ranging from plaster over lath to wallpaper. 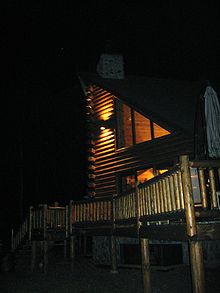 Log cabins were built from logs laid horizontally and interlocked on the ends with notches (British English cog joints). Some log cabins were built without notches and simply nailed together, but this was not as structurally sound. Modern building methods allow this shortcut. 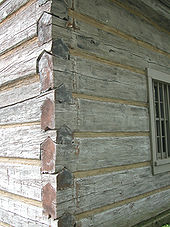 Details of cabin corner joint with squared off logs

The most important aspect of cabin building is the site upon which the cabin was built. Site selection was aimed at providing the cabin inhabitants with both sunlight and drainage to make them better able to cope with the rigors of frontier life. Proper site selection placed the home in a location best suited to manage the farm or ranch. When the first pioneers built cabins, they were able to "cherry pick" the best logs for cabins. These were old-growth trees with few limbs (knots) and straight with little taper. Such logs did not need to be hewn to fit well together. Careful notching minimized the size of the gap between the logs and reduced the amount of chinking (sticks or rocks) or daubing (mud) needed to fill the gap. The length of one log was generally the length of one wall, although this was not a limitation for most good cabin builders.

Decisions had to be made about the type of cabin. Styles varied greatly from one part of the US to another: the size of the cabin, the number of stories, type of roof, the orientation of doors and windows all needed to be taken into account when the cabin was designed. In addition, the source of the logs, the source of stone and available labor, either human or animal, had to be considered. If timber sources were further away from the site, the cabin size might be limited.

Cabin corners were often set on large stones; if the cabin was large, other stones were used at other points along the sill (bottom log). Since they were usually cut into the sill, thresholds were supported with rock as well. These stones are found below the corners of many 18th-century cabins as they are restored. Cabins were set on foundations to keep them out of damp soil but also to allow for storage or basements to be constructed below the cabin. Cabins with earth floors had no need for foundations. 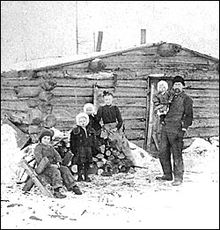 Cabins were constructed using a variety of notches. Notches can vary within ethnic groups as well as between them. Notches often varied on a single building, so their styles were not conclusive. One method common in the Ohio River Valley in southwestern Ohio and southeastern Indiana is the Block House End Method an example of this is found in the David Brown House.

Some older buildings in the United States Midwest and the Canadian Prairies are log structures covered with clapboards or other materials. Nineteenth-century cabins used as dwellings were occasionally plastered on the interior. The O'Farrell Cabin (ca. 1865) in Boise, Idaho had backed wallpaper used over newspaper. The C.C.A. Christenson Cabin in Ephraim, Utah (ca. 1880) was plastered over willow lath.

Log cabins reached their peak of complexity and elaboration with the Adirondack-style cabins of the mid-19th century. This style was the inspiration for many United States Park Service lodges built at the end of the 19th century and beginning of the 20th century. Log cabin building never died out or fell out of favor. It was surpassed by the needs of a growing urban United States. During the 1930s and the Great Depression, the Roosevelt Administration directed the Civilian Conservation Corps to build log lodges throughout the west for use by the Forest Service and the National Park Service. Timberline Lodge on Mount Hood in Oregon was such a log structure, and it was dedicated by President Franklin D. Roosevelt.

In 1930, the world's largest log cabin was constructed at a private resort in Montebello, Quebec, Canada. Often described as a "log château", it serves as the Château Montebello hotel. 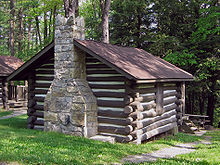 A log cabin built by the CCC between 1933 and 1937 in Black Moshannon State Park, Pennsylvania.

The modern version of a log cabin is the log home, which is a house built usually from milled logs. The logs are visible on the exterior and sometimes interior of the house. These cabins are mass manufactured, traditionally in Scandinavian countries and increasingly in eastern Europe. Squared milled logs are precut for easy assembly. Log homes are popular in rural areas, and even in some suburban locations. In many resort communities in the United States West, homes of log and stone measuring over 3,000 sq ft (280 m2) are not uncommon. These "kit" log homes are one of the largest consumers of logs in the Western United States.

In Europe, modern log cabins are often built in gardens and used as summerhouses, home offices or as an additional room in the garden. Summer houses and cottages are often built from logs in northern Europe.

Chinking refers to the mortar/infill material between the logs in the construction of log cabins and other log-walled structures. Traditionally, dried mosses, such as Pleurozium schreberi or Hylocomium splendens, were used in the Nordic countries as an insulator between logs.

The decision about roof type often was based on the material for roofing like bark. Milled lumber was usually the most popular choice for rafter roofs in areas where it was available. These roofs typify many log cabins built in the 20th century, having full-cut 2×4 rafters covered with pine and cedar shingles. The purlin roofs found in rural settings and locations, where milled lumber was not available, often were covered with long hand-split shingles.

The log cabin has been a symbol of humble origins in US politics since the early 19th century. Seven United States Presidents were born in log cabins, including Abraham Lincoln, Andrew Jackson, and James Buchanan.[7] Although William Henry Harrison was not one of them, he and the Whigs during the 1840 presidential election were the first to use a log cabin as a symbol to show North Americans that he was a man of the people. Other candidates followed Harrison's example, making the idea of a log cabin—and, more generally, a non-wealthy background—a recurring theme in campaign biographies.[8]

More than a century after Harrison, Adlai Stevenson acknowledged: "I wasn’t born in a log cabin. I didn’t work my way through school nor did I rise from rags to riches, and there’s no use trying to pretend I did."[8] Stevenson lost the 1952 presidential election in a landslide to Dwight D. Eisenhower.

Medford Lakes, New Jersey, a former resort town founded in 1929, is home to the highest concentration of log cabins in the world. 150 out of 1500 homes are considered to be log cabins.[9]

A house at 184 38th Street in Pittsburgh is the oldest known log house that continued to be used a residence in any major American city.[10]

A popular children's toy is Lincoln Logs, consisting of various notched dowel rods that can be fitted together to build scale miniature-sized structures. Lincoln Logs are said to have been named after Abraham Lincoln, who was born in a log cabin in rural Kentucky. He grew up in another log cabin in Indiana.