The naval history of China dates back thousands of years, with archives existing since the late Spring and Autumn Period (722 BC – 481 BC) about the ancient navy of China and the various ship types used in war.[1] China was leading maritime power in the years 1405-1433, when Chinese shipbuilders began to build massive oceangoing junks.[2] In modern times, the current Mainland Chinese and Taiwanese governments continue to maintain standing navies with the People's Liberation Army Navy and the Republic of China Navy, respectively.

Xu Fu's expedition in search of the medicine for immortality.

The legendary Xu Fu searching for mythical Fusang, or the setting up of the maritime Silk Road since the 2nd century BC from Hepu Commandery, drew the ancient Chinese naval maps.

Although numerous naval battles took place before the 12th century, such as the large-scale Three Kingdoms Battle of Chibi in the year 208, it was during the Song Dynasty (960–1279 AD) that the Chinese established a permanent, standing navy in 1132 AD.[3] At its height by the late 12th century there were 20 squadrons of some 52,000 marines, with the admiral's headquarters based at Dinghai, while the main base remained closer to modern Shanghai in those days.[3] The establishment of the permanent navy during the Song period came out of the need to defend against the Jurchens, who had overrun the northern half of China, and to escort merchant fleets entering the South East Pacific and Indian Ocean on long trade missions abroad to the Hindu, Islamic, and East African spheres of the world. However, considering China was a country which was longtime menaced by land-based nomadic tribes such as the Xiongnu, Göktürks, Mongols and so on, the navy was always seen as an adjunct rather than an important military force. By the 15–16th centuries China's canal system and internal economy were sufficiently developed to nullify the need for the Pacific fleet, which was scuttled when conservative Confucianists gained power in the court and began the policy of inward perfection. With the Opium Wars, which shook up the generals of the Qing Dynasty, the navy was once again attached greater importance. 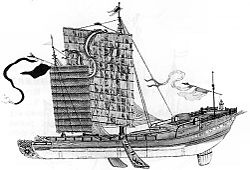 When the British fleet encountered the Chinese during the first Opium War, their officers noted the appearance of paddle-wheel boats among the Chinese fleet, which they took for a copy of the Western design. Paddle-wheel boats were actually developed by the Chinese independently in the 5th–6th centuries AD, only a century after their first surviving mention in Roman sources (see Paddle steamer),[4] though that method of propulsion had been abandoned for many centuries and only recently reintroduced before the war. Numerous other innovations were present in Chinese vessels during the Middle Ages that had not yet been adopted by the Western and Islamic worlds, some of which were documented by Marco Polo but which did not enter into other navies until the 18th century, when the British successfully incorporated them into ship designs. For example, medieval Chinese hulls were split into bulkhead sections so that a hull rupture only flooded a fraction of the ship and did not necessarily sink it (see Ship floodability). This was described in the book of the Song Dynasty maritime author Zhu Yu, the Pingzhou Table Talks of 1119 AD.[5] Along with the innovations described in Zhu's book, there were many other improvements to nautical technology in the medieval Song period. These included crossbeams bracing the ribs of ships to strengthen them, rudders that could be raised or lowered to allow ships to travel in a wider range of water depths, and the teeth of anchors arranged circularly instead of in one direction, "making them more reliable".[6] Junks also had their sails staggered by wooden poles so that the crew could raise and lower them with ropes from the deck, like window blinds, without having to climb around and tie or untie various ropes every time the ship needed to turn or adjust speed.

A significant naval battle was the Battle of Lake Poyang from August 30 to October 4 of the year 1363 AD, a battle which cemented the success of Zhu Yuanzhang in founding the Ming Dynasty. However, the Chinese fleet shrank tremendously after its military/tributary/exploratory functions in the early 15th century were deemed too expensive and it became primarily a police force on routes like the Grand Canal. Ships like the juggernauts of Zheng He's "treasure fleet," which dwarfed the largest Portuguese ships of the era by several times, were discontinued, and the junk became the predominant Chinese vessel until the country's relatively recent (in terms of Chinese sailing history) naval revival. 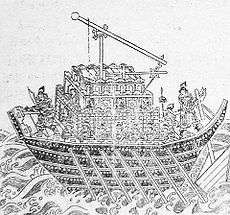 A Chinese Song Dynasty naval river ship with a Xuanfeng traction-trebuchet catapult on its top deck, taken from an illustration of the Wujing Zongyao (1044 AD).

One of the oldest known Chinese books written on naval matters was the Yuejueshu (Lost Records of the State of Yue) of 52 AD, attributed to the Han Dynasty scholar Yuan Kang.[1] Many passages of Yuan Kang's book were rewritten and published in Li Fang's encyclopedia of the Taiping Yulan (Imperial Readings of the Taiping Era), compiled in 983 AD as one of the Four Great Books of Song.[7] The preserved written passages of Yuan Kang's book were again featured in the Yuanjian Leihan (Mirror of the Infinite, a Classified Treasure Chest) encyclopedia, edited and compiled by Zhang Ying in 1701 during the Qing Dynasty.[1]

Yuan Kang's book listed various water crafts that were used for war, including one that was used primarily for ramming like Greco-Roman triremes.[8] These "classes" of ships were the great wing (da yi), the little wing (xiao yi), the stomach striker (tu wei), the castle ship (lou chuan), and the bridge ship (qiao chuan).[1] These were listed in the Yuejueshu as a written dialogue between King Helü of Wu (r. 514 BC–496 BC) and Wu Zixu (526 BC–484 BC), the latter of whom said: 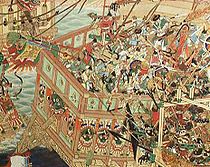 A 17th century handscroll depiction of battle during the Imjin War.

Ramming vessels were also attested to in other Chinese documents, including the Shi Ming dictionary of c. 100 AD written by Liu Xi.[9] The Chinese also used a large iron t-shaped hook connected to a spar to pin retreating ships down, as described in the Mozi book compiled in the 4th century BC.[10] This was discussed in a dialogue between Mozi and Lu Ban in 445 BC (when Lu traveled to the State of Chu from the State of Lu), as the hook-and-spar technique made standard on all Chu warships was given as the reason why the Yue navy lost in battle to Chu.[11]

The rebellion of Gongsun Shu in Sichuan province against the re-established Han Dynasty during the year 33 AD was recorded in the Book of Later Han, compiled by Fan Ye in the 5th century.[8] Gongsun sent a naval force of some twenty to thirty thousand troops down the Yangtze River to attack the position of the Han commander Cen Peng.[12] After Cen Peng defeated several of Gongsun's officers, Gongsun had a long floating pontoon bridge constructed across the Yangtze with fortified posts on it, protected further by a boom, as well as erecting forts on the river bank to provide further missile fire at another angle.[9] Cen Peng was unable to break through this barrier and barrage of missile fire, until he equipped his navy with castle ships, rowed assault vessels, and 'colliding swoopers' used for ramming in a fleet of several thousand vessels and quelled Gongsun's rebellion.[9] 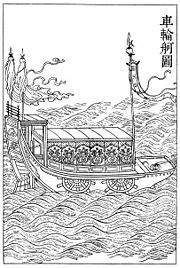 A Chinese paddle-wheel driven ship from a Qing Dynasty encyclopedia published in 1726.

The 'castle ship' design described by Yuan Kang saw continued use in Chinese naval battles after the Han period. Confronting the navy of the Chen Dynasty on the Yangtze River, Emperor Wen of Sui (r. 581–604) employed an enormous naval force of thousands of ships and 518,000 troops stationed along the Yangtze (from Sichuan to the Pacific Ocean).[13] The largest of these ships had five layered decks, could hold 800 passengers, and each ship was fitted with six 50 ft. long booms that were used to swing and damage enemy ships, along with the ability of pinning them down.[13]

During the Chinese Tang Dynasty (618–907 AD) there were some famous naval engagements, such as the Tang-Silla victory over the Korean kingdom of Baekje and Yamato Japanese forces in the Battle of Baekgang in 663. Tang Dynasty literature on naval warfare and ship design became more nuanced and complex. In his Taipai Yinjing (Canon of the White and Gloomy Planet of War) of 759 AD, Li Quan gave descriptions for several types of naval ships in his day (note: multiple-deck castle ships are referred to as tower ships below).[14] Not represented here, of course, is the paddle-wheel crafts innovated by the Tang Prince Li Gao more than a decade later in 784 AD.[4] Paddle-wheel craft would continue to hold an important place in the Chinese navy. Along with gunpowder bombs, paddle-wheel craft were a significant reason for the success in the later Song Dynasty naval victory of the Battle of Caishi in the year 1161 AD.[15]

Covered swoopers (Meng chong,艨艟); these are ships which have their backs roofed over and (armored with) a covering of rhinoceros hide. Both sides of the ship have oar-ports; and also both fore and aft, as well as to port and starboard, there are openings for crossbows and holes for spears. Enemy parties cannot board (these ships), nor can arrows or stones injure them. This arrangement is not adopted for large vessels because higher speed and mobility are preferable, in order to be able to swoop suddenly on the unprepared enemy. Thus these (covered swoopers) are not fighting ships (in the ordinary sense).[16]

Combat junks (Zhan xian); combat junks have ramparts and half-ramparts above the side of the hull, with the oar-ports below. Five feet from the edge of the deck (to port and starboard) there is set a deckhouse with ramparts, having ramparts above it as well. This doubles the space available for fighting. There is no cover or roof over the top (of the ship). Serrated pennants are flown from staffs fixed at many places on board, and there are gongs and drums; thus these (combat junks) are (real) fighting ships (in the ordinary sense).[16]

Flying barques (Zou ge); another kind of fighting ship. They have a double row of ramparts on the deck, and they carry more sailors (lit. rowers) and fewer soldiers, but the latter are selected from the best and bravest. These ships rush back and forth (over the waves) as if flying, and can attack an enemy unawares. They are most useful for emergencies and urgent duty.[16]

Patrol boats (Yu ting) are small vessels used for collecting intelligence. They have no ramparts above the hull, but to port and starboard there is one rowlock every four feet, varying in total number according to the size of the boat. Whether going forward, stopping, or returning, or making evolutions in formation, the speed (of these boats) is like flying. But they are for reconnaissance, they are not fighting boats/ships .[16]

Sea hawks (Hai hu); these ships have low bows and high sterns, the forward parts (of the hull) being small and the after parts large, like the shape of the hu bird (when floating on the water). Below deck level, both to port and starboard, there are 'floating-boards' (fou ban) shaped like the wings of the hu bird. These help the (sea hawk) ships, so that even when wind and wave arise in fury, they are neither (driven) sideways, nor overturn. Covering over and protecting the upper parts on both sides of the ship are stretched raw ox-hides, as if on a city wall [a footnote: protection against incendiary projectiles]. There are serrated pennants, and gongs and drums, just as on the fighting ships.[17]

Numerous modern ships equipped with Krupp guns, electricity, gatling guns, torpedoes, and other modern weapons were acquired by the Qing dynasty from western powers. They were manned by western trained Chinese officers.[19]