The Nanyang Fleet (南洋水師) was one of the four modernised Chinese navies in the late Qing Dynasty. Established in the 1870s, the fleet suffered losses in the Sino-French War, escaped intact in the Sino-Japanese War, and was formally abolished in 1909.

Before 1885 the Southern Seas (Nanyang) Fleet, based at Shanghai, was the largest of China's four regional fleets. In the early 1880s its best ships were the modern composite cruiser Kaiji, completed in 1884 at the Foochow Navy Yard, the composite sloops Kangji and Chengching, also recent products of the Foochow Navy Yard (1878 and 1880), and the 2,630-ton wooden steam frigate Yuyuan, built at the Kiangnan Arsenal in 1873. The fleet was originally to have had the four steel Rendel gunboats Zhendong, Zhenxi, Zhennan and Zhenbei, completed in 1879, but Li Hongzhang was so impressed by them that he took them over for the Beiyang Fleet, compensating the Nanyang Fleet with Longxiang, Huwei, Feiting and Cedian, four iron Rendel 'alphabetical' gunboats that had been in service at Tianjin since 1876.[1]

In July 1884, on the eve of the Sino-French War, the Nanyang fleet was reinforced by the German-built steel cruisers Nanrui and Nanchen, which sailed from Germany in March 1884. 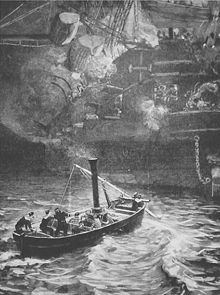 The commander of the Nanyang fleet during the Sino-French War was Admiral Li Chengmou (李成謀), who had earlier commanded the Fujian fleet and the traditional Yangtze water forces.[2]

Most of the ships of the Nanyang fleet remained safely in harbour at Shanghai or Nanking during the Sino-French War (August 1884–April 1885). In July 1884 the French ironclad Triomphante observed the presence of the Nanyang fleet at Shanghai. Her commander, capitaine de vaisseau Baux, cabled Admiral Amédée Courbet for permission to attack the Chinese with Triomphante and the cruiser d'Estaing. Jules Ferry's cabinet considered the merits of an attack on the Nanyang fleet, but decided that the risks to business confidence were too great, and notified Courbet that no naval action would be permitted at Shanghai. Courbet thereupon ordered Triomphante and d'Estaing to leave Shanghai and join him in the Min River, where he was concentrating his squadron against the Fujian Fleet and the Foochow Navy Yard. The French cruiser Parseval was sent to Shanghai in early August to keep the Nanyang Fleet under observation.

Courbet's attack on the Fujian Fleet on 23 August 1884 at the Battle of Fuzhou plunged France and China into war. The Nanyang Fleet commanders responded by splitting the fleet to protect Shanghai and the Nanking Arsenal, both plausible targets for future French naval descents. The Rendel gunboats Longxiang, Feiting, Cedian and Huwei remained at Shanghai, and the frigate Haian was filled with stones and prepared as a blockship, to be sunk across the entrance to the Huangpu river if the French showed themselves in force. The German-built cruisers Nanrui and Nanchen, together with several other ships of the Nanyang Fleet, withdrew to Nanking. In late August 1884 Admiral Courbet ordered Parseval to leave Shanghai. The lone French cruiser had lain within range of the Nanyang Fleet for a whole week after the outbreak of war, but the Chinese made no attempt to attack her. On the night of 30 August 1884 capitaine de vaisseau Thounens of Parseval ran the gauntlet of the guns of the Wusong forts and escaped without casualties to the open sea. The Nanyang Fleet did nothing whatsoever to hinder his departure.[3]

Part of the Nanyang fleet made a disastrous sortie in February 1885 to try to break the French blockade of Formosa. The frigate Yuyuan and the composite sloop Chengqing were sunk in the Battle of Shipu (14 February 1885), the former by a French torpedo attack and the latter by friendly fire.[4] Kaiji, Nanrui, Nanchen, Chaowu, Yuankai and two 'alphabetical' gunboats were trapped in Zhenhai Bay by the French on 1 March 1885 and ignominiously blockaded there for the rest of the war.[5]

Nevertheless, the Nanyang fleet continued to acquire new ships after the Sino-French War, some of reasonable quality. The first of the new ships was the steel cruiser Baomin, completed at the Kiangnan Arsenal in 1885. The next additions were the composite cruisers Jingqing and Huantai, both products of the Foochow Navy Yard (1886 and 1887).[6]

Ships of the Nanyang Fleet