Dracula is a fictional character, a comic book supervillain appearing in books published by Marvel Comics. He is based on the vampire Count Dracula from the novel of the same name by author Bram Stoker, and is also influenced by Universal Studios' version of the character.

In Marvel Comics, Dracula appeared in a Tomb of Dracula comic[1] which ended in 1979. Although Dracula (and all other vampires) were eventually destroyed by the mystical "Montesi Formula" in the pages of Doctor Strange, the vampire lord was revived. Marvel published a four-issue Tomb of Dracula miniseries, reuniting Wolfman and Colan, under its Epic Comics imprint in 1991, and revived Dracula and his foes in the short-lived Nightstalkers and Blade series in the 1990s. Most recently, Dracula took the title role in the miniseries Dracula: Lord of the Undead.

The character returns in the Captain Britain and MI13 storyline "Vampire State",[2] with Doctor Doom.[3][4] He is then the main subject of the 2010 series Death of Dracula written by Victor Gischler.[5][6][7]

Born Vlad Dracul in 1430 in Schassburg, Transylvania (now Sighişoara, Romania), he was the second son of a Transylvanian nobleman. He was named prince of Transylvania and voivode (prince) of Wallachia and became ruler while still a child. Over the next several years, he struggled against the Ottoman Turks, losing and regaining his throne. Through an arranged marriage to a Hungarian noblewoman, he sired his daughter, Lilith. He sent his wife away and later married a woman named Maria, with whom he had a son named Vlad Tepelus. He had a son with his third wife Domini named Janus.

In 1459, Dracula was mortally wounded by the Turkish warlord Turac, who brought Dracula to a gypsy named Lianda to be healed. However, Lianda was a vampire, and in revenge for his persecution of the gypsies, transformed Dracula into a vampire as well. Turac raped and killed Dracula's wife Maria, and in revenge Dracula slew Turac, making him a vampire as well. Dracula gave his son Vlad Tepelus to gypsies to raise.

Dracula defeated the vampire Nimrod in battle, and thus succeeded him as ruler of Earth’s vampires. Soon afterwards, he enhanced his own blood with that of Varnae, giving him greater powers than any other vampire. In 1471, Dracula abdicated his princehood.

In the 19th century, he faced opposition from Abraham van Helsing and Jonathan Harker in England, the exploits of which were recorded in the 1897 novel by Stoker, Dracula. When the humans destroyed Dracula, his remains were placed in his coffin, concealed within a cave blocked by an enormous boulder. In Frankenstein's Monster, the behemoth in the story was tricked into unsealing the cave and opening the coffin, thus, freeing Dracula.

In the 20th century, Dracula was returned to vampiric life by Clifton Graves. Dracula then first met and clashes with Frank Drake.[8] He soon first encountered an adult Rachel van Helsing.[9] Not long after that, he renewed his enmity with Quincy Harker.[10] He recounted his first clashes with Cagliostro and Solomon Kane.[11] He later battled the Werewolf.[12] He eventually had his first contemporary encounter with his daughter Lilith.[13] Not long after that, he clashed with the N'Garai demons.[14]

Dracula encountered numerous opponents in the 20th century, including Quincy Harker and Rachel van Helsing, the descendants of his enemies described by Stoker, vampire hunter Blade, his only known living descendant Frank Drake, vampiric detective Hannibal King, Mephisto, Doctor Sun, Spider-Man, the X-Men, and others. Just before World War I, he was responsible for transforming Lord John Falsworth into Baron Blood.

Doctor Strange destroyed Dracula and all of Earth's vampires by casting the Montesi Formula,[15] though Dracula eventually returned.

In the 21st century, Dracula assembled an army of vampires in a sanctuary on the Moon and planned to conquer the United Kingdom,[16] with other supernatural villains Lilith (a different entity from his daughter), Captain Fate, and Baron Blood. He first contacted Doctor Doom to agree to a non-aggression pact with him, and by association the Cabal, in order to be unopposed in his conquest. Once he'd secured this, he launched a pre-emptive strike on MI-13's superheroes, launching specially-bred vampires at the Earth like missiles.

It was also shown he still possessed contempt and bigotry towards Muslims, and intended to exterminate them once he had secured Britain; as part of his attack, he went to the parents of Faiza Hussain,[17] attacking her mother and taking her father (along with Killpower, an MI-13 agent sent to protect the family) hostage.[18] British vampire hero Spitfire, meanwhile, was abducted and forcibly turned into a minion. MI-13 were manipulated into exposing the whereabouts of Quincy Harker's remains, magically treated to prevent vampires from entering the UK without invitation, so Dracula could destroy them. Once that was done, with the help of Fate, he launched a series of warships towards Earth.[volume & issue needed]

However, unknown to Dracula, Pete Wisdom had tricked him into destroying fake remains and Spitfire had been faking her mind control while channelling information to MI-13. In order to stop Dracula from finding out the remains were fake, he was briefly trapped in a demonic "Dream Corridor" which saw him live out his fantasies of victory (ending with him standing in a conquered House of Commons while holding the Speaker's mace); as well as giving MI-13 some intelligence on his plans, it stopped him from sending in advance teams. Once he escaped, there were a series of attacks to keep him occupied until the warships entered British airspace without invitation, wiping out the bulk of his forces.[volume & issue needed]

In the final battle, he was pursued to his fortress and prevented from escaping by Black Knight and Faiza Hussain, wielder of the sword Excalibur. While Dracula was able to seriously wound Black Knight, he was slain with a single blow from Excalibur, leaving Britain victorious.[19]

In a 2010 X-Men storyline "Curse of the Mutants", Dracula is resurrected by the X-Men in hopes that he would join them against his son their now mutual enemy. However, Dracula declines and leaves shortly after.[20] Dracula reasserts himself as Lord of the Vampires granting amnesty to those who sided with Xarus. When Xarus tries to attack Dracula, he rips off Xarus' head. Although he contemplated attacking the X-Men, Cyclops reminded him that they had had custody of his body for seventeen hours before the head was reattached, suggesting that they had included a 'contingency plan' in Dracula similar to the plan they had used to infiltrate Xarus's forces by temporarily shutting down Wolverine's healing factor so that he could be turned and then returned to normal. Although Dracula suspected that Cyclops was bluffing, he complimented Cyclops's style and allowed them to depart, even returning the now-vampire Jubilee to the X-Men.[21]

During the Fear Itself storyline, Dracula is informed of the arrival of Hulk (in the form of Nul: Breaker of Worlds) by one of his followers when Nul lands in the Carpathian Foothills following his fight with Thor and ends up taking down some vampires. It is revealed that he has the mysterious Raizo Kodo and his legion of vampires called "The Forgiven" locked up in his dungeon.[22] Dracula frees the Forgiven, who worked to slow Nul's progress. Dracula then prepares the vampires for his last stand.[23] As the Forgiven continues to stall the Nul, Dracula prepares his vampire armies for battle when Nul gets closer.[24] 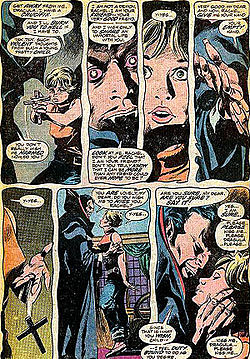 Dracula attempting to vampirize Rachel van Helsing, from The Tomb of Dracula No. 40 (Jan. 1986). Art by Gene Colan and Tom Palmer.

Dracula gained the powers of a vampire from his transformation into a vampire by the bite of the Vampiress Lianda, and gained additional power by Varnae. Dracula possesses far greater powers than most vampires. He is superhumanly strong (to the point of standing toe-to-toe and defeating Colossus in single combat), and also possesses superhuman speed, stamina, reflexes, and transvection. He is immune to aging, conventional disease, sickness and most forms of injury. He cannot be killed or permanently injured by conventional means.

He is unaffected by most assaults and, due to his healing factor, can rapidly regenerate damaged tissue. Dracula can manipulate the minds of others, and command animals to his will, such as rodents, bats, and wolves. With limited exceptions, he may control other vampires. He has the ability to mentally control victims he has bitten, and can temporarily hypnotize anyone with his gaze.

He is capable of shapeshifting into a bat – normal or human size – or a wolf while retaining his intelligence, and into a fog or mist – partially or fully – and has the ability of weather control, such as summoning electrical storms. Like some vampires in other works of fiction, Dracula does not cast reflections. His powers have been greatly amplified and his weaknesses circumvented by magical sources, such as spells of the Darkholders.

Dracula has a dependence on the ingestion of fresh blood to sustain his existence, and an inability to endure direct sunlight. He falls into a comatose state during daylight hours and must spend much time in contact with his native soil. He has vulnerabilities to garlic, silver (which can cause severe pain), the presence of religious symbols (wielded by one who believes in its spiritual meaning), and can be killed by beheading, a wooden stake through the heart, or blades made of silver. He can also be destroyed by the Darkhold spell known as the Montesi Formula.

Dracula is a skilled hand-to-hand combatant and swordsman, specializing in 15th-century warfare and militaristic strategy. He has a gifted intellect, and studied under tutors in his youth in Transylvania.