Denominación de Origen (Designation of Origin - DO) is part of a regulatory classification system primarily for Spanish wines (similar to the French appellations) but also for other foodstuffs like honey, meats and condiments. In wines it parallels the hierarchical system of France (1935) and Italy (1963) although Rioja (1925) and Sherry (1933) preceded the full system. In foods it performs a similar role, namely regulation of quality and geographical origin among Spain's finest producers. There are five other designated categories solely for wine and a further three specifically covering food and condiments, all recognised by the European Union (EU). In Catalonia, two further categories - Q and A - cover traditional Catalonian artisan food produce, but were not recognised by the EU as of 2007.

Official DO label as found on the back of a Navarre region wine bottle. Individual producers are expected to print and number their own labels.

The Spanish Ministry of Agriculture, Fisheries and Food (MAPA - Ministerio de Agricultura, Pesca y Alimentación) regulates the quality of Spanish foodstuffs via a labelling system which establishes, among other things, a Denominación de Origen for the country's highest quality produce. A semi-autonomous governing body (Consejo Regulador) exists for each region and for each food type, comprising skilled, impartial members who investigate the quality, ingredients and production process of each product, ensuring they attain specific quality levels. They report to a central council at national government level but are normally based in the largest population centre of a given region and are responsible for enforcing its geographical limits. Products labelled Denominación de Origen, apart from being of superior quality, are expected to carry specific characteristics of geographical region or individual producer and be derived from raw materials originating within the region. Like most of these designations, a fundamental tenet of a DO label is that no product outside of that region is permitted to bear the name.

Food and wine are inseparable from Spanish culture, historically bound to the social, economic, literary and even mystical fabric of society over thousands of years, so it is perhaps not surprising that attempts to regulate and normalize activities related to them have proven highly elusive. It wasn't until the 17th century, when legislative authorities became sufficiently interested in issues such as public health, public order and economic regulation, that laws begin to be formulated with regard to wine, initially prohibiting, later encouraging and ultimately regulating its production, commercialization and consumption. Food regulation waited even longer, until Spain's entry into the EU and signing up to the Common Agricultural Policy during the latter part of the 20th century.[1]

A series of Royal Decrees on wine were issued during the 18th and 19th centuries, focussing on ad hoc issues which arose due to new tendencies at home and abroad and often dealing more with maverick suppliers than any concern with comprehensive regulation. Gradually though, concern shifted from issues related to supply towards the need to regulate quality, especially for foreign markets. During the 1920s serious attempts were made to formulate some kind of classification along the lines of the French appellation system. Following the establishment of the Rioja as the first Spanish denominación in 1925, the Estatuto de Vino of 1932 coincided with national and international recognition of the sherry-producing region of Jerez.

Despite being thorough and wide-ranging, the Estatuto was quickly overwhelmed by technological advances in agriculture. By the time the EEC became influential in this area it was clear that the law would require fundamental re-drafting. A new Estatuto, the Ley del Vino y de los Alcoholes (25/1970) came into place in December 1970 but was again undermined, this time by two important events: the new Spanish Constitution (inaugurated in 1978) that restated geographical considerations with the Estado de las Autonomias, and Spain's pending membership of the European Community (1986) that brought about a rapid classification of all Spanish produce in line with other member states.

Finally, in March 1996, the Spanish government unveiled its own multi-tier sub-classifications, consistent with EU regulation but more pertinent to Spanish agriculture. Hence, for example, the EU's Quality Wines Produced in Specified Regions (QWPSR) covers all Spanish wines graded above the basic Vino de Mesa (table wine), within which the Spanish Denominación de Origen forms a subset.[2] This has coincided with a rise in the perceived quality of Spanish produce generally and has been widely acclaimed, although some areas, like the super-strict Denominación de Pago, remain controversial and liable to future amendment.[3]

Denominaciones de Origen status can be applied to a wide range of foods and condiments, specifically:

Quality foods may be designated a range of classifications, of which Denominación de Origen is the recognition of superior quality, with identifiable characteristics and specific ingredients, derived from an identifiable and verifiable source. Other classifications, not necessarily mutually exclusive, are as follows, under the general heading of Alimentos de Calidad Diferenciada (Foods of Differentiated Quality):
Denominación de Origen Protegida (DOP, or Protected Denomination of Origin) - An EU designation referring to food products specific to a particular region or town conveying a particular quality or characteristic of the designated area.
Indicación Geográfica Protegida (IGP, or Protected Geographical Indicator) - Similar to DOP but relating to a wider, less specific, geographical region.
Especialidades Tradicionales Garantizadas (ETG, or Traditional Specialty Guaranteed) - Products made using traditional ingredients, recipes or methods.
Artisan Food Product Stamp (A) - Recognizing small, family-run food businesses with high quality, distinctive produce overseen by a qualified artisan (Catalonia only, not recognized by the EU).
Food Quality Stamp (Q) - Foods with superior quality composition, production methods or presentation (Catalonia only, not recognized by the EU).
Producción Agricultura Ecológica (PAE, or Organic Agricultural Production) - A stamp guaranteeing natural, environmentally-friendly production methods.[4][5]

By 2004 Spain had 250 Denominaciones de Origen and Indicaciones Geográficas Protegidas, over half of which related to food.[1] The following list of better-known Denominaciónes de Origen is by no means exhaustive: 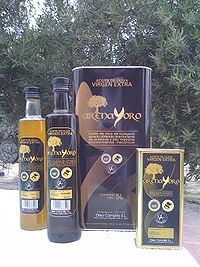 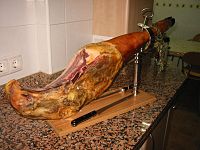 A leg of serrano ham on a jamonera 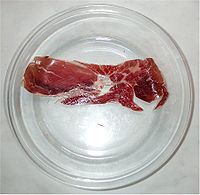 A slice of Paleta Ibérica 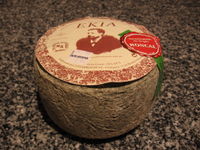 Roncal cheese with DO label

The Denominaciónes de Origen for olive oil include:

The famous jamón serrano has several Denominaciónes de Origen, including:

There are just three Appellations for vinegar in the EU, of which two are in Spain:

Wine region classification in Spain takes a quite complex hierarchical form in which the Denominación de Origen is a mainstream grading, equivalent to the French AOC and the Italian DOC. As of 2011, Spain has 120 identifiable wine regions under some form of geographical classification (10 DO de Pago/VP; 2 DOCa/DOQ; 65 DO; 4 VCPRD; and 38 VdlT. The Spanish DO is actually a subset of the EU-sponsored QWPSR (Quality Wine Produced in Specific Regions) regulatory code (Vino de Calidad Producido en Región Determinada (VCPRD) in Spanish) which Spain formally adopted in 1986, upon accession to the (then) EEC.[6] The Spanish appellation hierarchy for wines takes the following form up to 2009. From 2009 onward the new EU regulations apply - see below:

Albariño wines from the Rias Baixas DO.

The more prominent DO regions include: