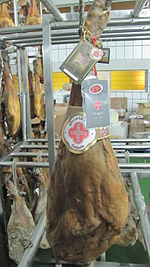 Jamón Ibérico, BEHER "Bellota Oro", was elected as "Best ham in the world" in IFFA Delicat 2007 and 2010.
This article is about the food. For other uses, see Jamon (disambiguation).

Jamón (pronounced: [xaˈmon]) is the Spanish word for ham. In English it refers to certain types of dry-cured ham from Spain. There are two primary types of jamón: Jamón serrano (meaning ham from the sierra or mountains) and Jamón ibérico (ham from the Black Iberian Pig).

Jamon is similar to Italian prosciutto but it is cured longer (max.: 18 months) and tastes slightly different.

The four major quality categories of dry-cured uncooked ham are as follows, from highest to lowest quality:

Spanish Jamóns are covered by European law with PDO or PGI:

Jamón may also be smoked in some regions and it is consumed for personal use. The is common in the southern area of Castilla y León (New Castille) as well as parts of Extremadura. Such a Jamón has a harder texture and smoky-salty flavour.