It is also known as "eleventy", a term made famous by linguist and author J. R. R. Tolkien (Bilbo Baggins celebrates his eleventy-first birthday at the beginning of The Lord of the Rings) and derived from the Old English hund endleofantig.[1] When the word eleventy is used, it may indicate the exact number (110), or more commonly an indefinite large number such as gazillion.

110 is the side of the smallest square that can be tiled with distinct integer-sided squares.

RSA-110 is one of the RSA numbers, large semiprimes that are part of the RSA Factoring Challenge.

The Rule 110 cellular automaton, like Conway's Game of Life, exhibits what Stephen Wolfram calls "Class 4 behavior," which is neither completely random nor completely repetitive.[2] 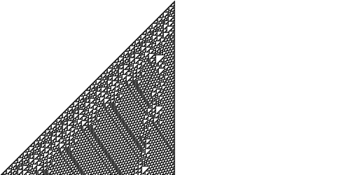 An example run of a rule 110 cellular automaton