Democrats of the Left

Democrats of the Left

The Democrats of the Left (Italian: Democratici di Sinistra, DS) was a social-democratic Italian political party and part of the Olive Tree electoral coalition, which merged with a number of centrist and leftist groups to form the Democratic Party on 14 October 2007. Its leaders were Piero Fassino, national secretary, and Massimo D'Alema, president.

The Democrats of the Left developed from the Democratic Party of the Left (Partito Democratico della Sinistra, PDS), which in turn was a reshaping of the Italian Communist Party (Partito Comunista Italiano, PCI) into a democratic socialist party. Under the leadership of Massimo D'Alema, the party merged with other minor like-minded movements (Labour Federation, Social Christians, Republican Left, Unitarian Communists, Reformists for Europe and Democratic Federation), and took the current name, removing the hammer and sickle from its symbol and substituting it with the red carnation of the Party of European Socialists.

Massimo D'Alema became prime minister in October 1998 and was replaced as the leader of DS by Walter Veltroni. During the party's first national congress in January 2000, Veltroni received the support of the 79.9% of delegates, while the left wing of the party, at the time led by three women (Anna Finocchiaro, Fulvia Bandoli and Pasqualina Napoletano), had the support of 20.1% of them.

The last secretary of the party was Piero Fassino, elected with 61.8% of party members' votes during the second national congress in November 2001. Piero Fassino was the candidate of a mainstream Third Way tendency. The candidacy of Giovanni Berlinguer, endorsed by left-wingers, democratic socialists and the Italian General Confederation of Labour (CGIL) trade union, gained 34.1% of party members votes. The right wing of the party, led by Enrico Morando, received 4.1%. 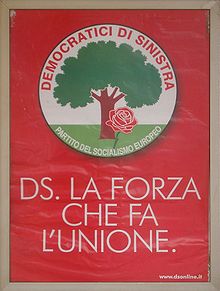 A political placard of the Democrats of the Left.

In the 2006 general election, held on April 9 and April 10, 2006, the Democrats of the Left endorsed the candidacy of Romano Prodi as Prime Minister of Italy. DS presented their symbol for the Senate and ran under the Olive Tree symbol for the Chamber, together with DL and MRE. The party achieved a 17.17% in the Senate (62 senators) and the Olive Tree reached a 31.20% in the Chamber (220 deputies), more than the sum of its components in the Senate. This, and the narrow margin gained on the centre-right coalition, prompted a discussion on the party's future. As of 2006[update] the party leadership was committed to a future merge with DL, eventually creating a new Democratic Party the following year.

Nine Ministers of the Prodi II Cabinet were affiliated to the Democrats of the Left, including the Deputy Prime Minister and Minister of Foreign Affairs Massimo D'Alema. The current President of the Italian Republic Giorgio Napolitano, elected on May 10, 2006, is also a former DS member (as usual, although not mandatory, he renounced his party affiliation before being sworn in, because the office he was going to assume is considered to be above party politics).

The fourth national congress was held from April 19 to 21, 2007. During local congresses, Piero Fassino and his motion named For the Democratic Party, backed by the majority of the leading members of the party, such as D'Alema, Pier Luigi Bersani and Antonio Bassolino, received the support of 75.6% of party members. The motion was clearly in support of the Democratic Party project.

The left-wing of Fabio Mussi, Cesare Salvi, Fulvia Bandoli and Valdo Spini (To the Left. For European Socialism, joint-group of members of DS Left-wing – Returning to win, DS Left-wing for Socialism, some affiliates to the Ecologist Left and most Labourites – Liberal Socialists scored 15.0%; this motion was instead opposed to the Democratic Party. All members supportive of this group later founded a new movement, Democratic Left, which aimed to unite the heterogeneous Italian left-wing, from direct descendents of the Italian Socialist Party to the euro-communist tendencies best represented in Italy by the Communist Refoundation Party.

A third motion, named For a New, Democratic and Socialist Party and signed by Gavino Angius, Mauro Zani and originally also by Giuseppe Caldarola took 9.3% of party members votes. This group, mainly composed of former supporters of D'Alema and Fassino (gathered in the new Socialists and Europeans faction), and some left-wingers and environmentalists, supported the creation of a new party only within the Party of European Socialists and opposed the proposal of the Democratic Party (perceived as a mere addition of DS and DL with no reference at all to socialism). Several of its members and supporters, including Angius, later decided to leave the party to join the Democratic Left movement, whereas several others, including Zani, preferred to stay within the Democrats of the Left.

Inside the party were several organized political tendency associations. Inside the party, there was often a somewhat simplistic distinction between reformists (riformisti) and radicals (radicali or massimalisti), indicating respectively the mainstream or the left-wing area, formerly known as Correntone.

The core of the social-democratic party majority wasn't related to a specific tendency association, although several smaller movements, splits of former centrist or centre-left Italian parties, related to it. These were the Labourites – Liberal Socialists (Laburisti – Socialisti Liberali), Reformist Europe (Europa Riformista) and the Sicilian Reformist Movement (Movimento Riformista) all from the Italian Socialist Party, the Social Christians (Cristiano Sociali) from the left-wing of Christian Democracy, the Republican Left (Sinistra Repubblicana) from the left-wing of the Italian Republican Party and the Liberal Left (Sinistra Liberale) from the left wing of the Italian Liberal Party.

On the right wing the Liberal association had a moderate Third Way or radical center political agenda. This faction was included in the party majority in later years, while a dissident group left it, in opposition to the creation of the Democratic Party, and formed a new faction, named Socialists and Europeans.

Before the 2007 convention, the left-wing opposition was led by the DS Left-wing-Returning to win (Sinistra DS-Per tornare a vincere), a left-wing democratic socialist tendency, with other smaller groups including DS Left-wing for Socialism (Sinistra DS per il Socialismo), left-wing democratic socialists and the Ecologist Left (Sinistra Ecologista), left-wing environmentalists. As most of their members left the party in refusal of the Democratic Party foundation, their subsequent composition and weight was unclear.

Several personalities formerly inside or close to the left-wing area of the party, as Pietro Folena, Pietro Ingrao and Achille Occhetto approached or joined the Communist Refoundation Party which, from its sixth congress held in January 2005, was moving towards a more heterogeneous, non-sectarian and strongly pacifist kind of left-wing party.