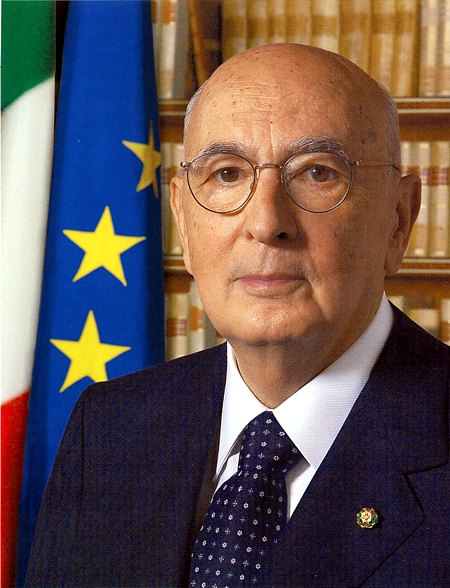 The President of the Italian Republic ( _it. Presidente della Repubblica Italiana) is the of , and as such is intended to represent national unity rather than a particular political tendency. His term of office lasts for seven years.

The President of the Republic is elected by Parliament in joint session, together with three representatives of each region (except for the , which gets only one representative) in such a way as to guarantee representation to minorities.

To achieve the maximum consensus for an institution intended to guarantee the upholding of the constitution, in the first three ballots a two-thirds majority is required. After that, a simple majority suffices.

The President’s term lasts seven years; this prevents any president from being elected by the same Houses, which have a five-year mandate, and grants some freedom from excessive political ties to the appointing body.

The vote is held in the Chamber of Deputies. The President takes office after having taken an oath before Parliament, and delivering to it a presidential address.

In addition to the natural end, the mandate can be stopped by:
* Voluntary resignation;
* Death;
* Temporary impediment, for health reasons;
* Permanent inability, due to serious illness;
* Dismissal, or for crimes of high treason and attack on the Constitution.

The lays out the duties and powers of the President of the Republic, which in detail are:
#in relation to external representation:
#*Accrediting and receiving diplomatic functionaries;
#*Ratifying international treaties, upon authorization of Parliament (if needed according to article 80 of the Constitution);
#*Making s abroad, accompanied by a member of the government;
#*Declaring a , deliberated by Parliament;
#in relation to the exercise of parliamentary functions:
#*Nominating up to five senators-for-life:
#*Sending messages to the Chambers, calling them to extraordinary session, dissolving them other than in the last six months of his mandate (the "white semester"), provided they do not coincide in whole or in part with the last six months of the legislature;
#*Calling elections and fixing the date for the first meeting of the new Chambers;
#in relation to legislative functions:
#*Authorizing the presentation in Parliament of proposed laws on the part of the government;
#*Promulgating the laws approved in Parliament;
#*Remanding to the Chambers, with an explanation, and asking for reconsideration (however, the president is required to promulgate the law if it is reapproved without modification);
#in relation to popular sovereignty:
#*Calling referenda, and, in case they are approved by the voters, declaring the abrogation of the laws thereto subjected;
#in relation to the executive function and of political guideline;
#*Naming, after due consultation, the , and on proposal of the latter, the ministers;
#*Accepting the oath of the government, and its resignation if it resigns;
#*Emanating "laws by decree" (proposed by the government without the approval of Parliament; they remain valid only for a limited time) and the administrative acts and regulations of the government;
#*Naming certain high state functionaries;
#*Presiding over the "Consiglio Supremo della Difesa" ("Supreme Defense Council"), and commanding the armed forces;
#*Decreeing the dissolution of regional councils and the removals of presidents of regions;
#in relation to the exercise of jurisdiction:
#*Presiding over the "Consiglio Superiore della Magistratura" ("Superior Judicial Council");
#*Naming one third of the "Corte Costituzionale" ("Constitutional Court"),the members elected by the President of the Republic are 5, another 5 are elected by the Parliament and another 5 are elected by the highest Courts;
#*Granting pardons and commutations.

The Constitution provides that every presidential act must be countersigned by a Minister or the President of the Council.

The President resides in at the , and also has at his or her disposal the presidential holdings of , near Rome, and , in .

* This article was translated from [http://it.wikipedia.org/w/index.php?title=Presidente_della_Repubblica_Italiana&oldid=2655901 the equivalent article in Italian Wikipedia] , retrieved