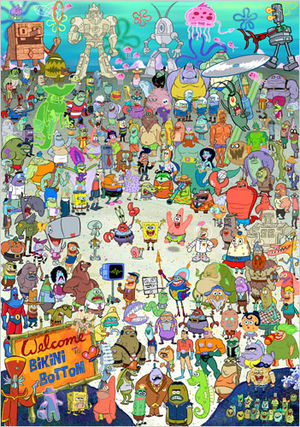 All of the SpongeBob SquarePants characters in the show.

The characters in SpongeBob SquarePants were created by artist, animator and former marine biologist Stephen Hillenburg. In addition to the series' main cast, various celebrities have voiced roles in SpongeBob SquarePants. Notably, Ernest Borgnine and Tim Conway voice the roles of recurring characters Mermaid Man and Barnacle Boy respectively, while others have taken a cameo part.

Stephen Hillenburg conceived the characters for SpongeBob SquarePants in 1984, while he was teaching and studying marine biology at what is now the Orange County Ocean Institute.[1] During this period, Hillenburg became fascinated in animation, and wrote a comic book entitled The Intertidal Zone starring various anthropomorphic forms of sea life, many of which would evolve into SpongeBob SquarePants characters,[2] including "Bob the Sponge", who was the co-host of the comic and resembled an actual sea sponge as opposed to SpongeBob.[3] In 1987, Hillenburg left the institute to pursue his dream of becoming an animator.[2][3]

SpongeBob SquarePants (Tom Kenny) is the title character of the series of the same name. He is a sea sponge who physically resembles an artificial, kitchen-type sponge and lives in a pineapple house. He is often shown in the series working at a fast-food restaurant called the The Krusty Krab as a fry cook. He seems to worship the Krabby Patty. SpongeBob's hobbies in the show include practicing karate with Sandy, catching jellyfish and blowing intricate bubbles with Patrick. He attends Mrs. Puff's Boating School, but has never passed; his lack of a driver's license serves as a running gag throughout the series. He (so far) appears in every episode in the series. He is often seen at his job. It is implied that although he has no experience, he has talent in the arts. He also is on the feminine side due to trademark issues. Green and purple were early color choices for the character before his classic and current yellow was chosen. He is weak and fragile, shown in MuscleBob BuffPants when he can't lift a glass of tea, and he claim's to be "pumping iron" with his plush toys. His first appearance was in "Help Wanted".[4]

Patrick Star lives under a rock and his most prominent character trait is his low intelligence. Depicted as a negative influence on SpongeBob, he encourages dangerous and foolish activities that often get the two into trouble. While typically unemployed throughout the course of the series, Patrick holds various short-term jobs as the storyline of each episode requires. He is good-natured and kind. He is "the tough one" between the two and is often called to fight SpongeBob's battles for him (although he usually gets distracted). SpongeBob is the only character that Patrick shows any real emotions for. Patrick is shown to have a mean temper in some episodes and can only be calmed by his best friend's encouraging words. Despite being shown as a largely unintelligent character, it is mentioned in "The Bully" that he went to community college. He also seems to have short term burst of "knowledge", he can sometimes show that he does have a brain. His first appearance was in "Help Wanted".

Sandy Cheeks [5] (Carolyn Lawrence) is a squirrel who is another of SpongeBob's best friends. She is the series' only terrestrial character, living in the "Treedome", which is an underwater dome that contains a large oak tree. She is a scientist who practices karate with SpongeBob and enjoys extreme sports.[6] She is from the U.S. state of Texas, and speaks with a stereotypical southern accent with Texas dialect.

The nature of Sandy's relationship with SpongeBob is somewhat ambiguous. SpongeBob has brought her flowers on several occasions, among other things. She is known for not allowing SpongeBob and Patrick from playing with her inventions in worry that they will destroy them; sometimes however SpongeBob and Patrick would trick Sandy and take her inventions for their subject for the episode. In a clip from Random Acts of SpongeBob, SpongeBob dropped Sandy a letter (with a bouquet of flowers) that called her the "smartest, prettiest squirrel in all of Bikini Bottom". It was on the Surprise Sandy Day. In "Truth or Square", Sandy and SpongeBob get married in a play. Her first appearance was in "Tea at The Treedome".

Squidward Q. Tentacles (Rodger Bumpass) is SpongeBob and Patrick's cephalopod neighbor. Squidward has been referred to as a squid by the series creators, but he referred himself as an octopus once. He lives in a house shaped like an Easter Island Head. He loves art, and has dreams of being a great and respected artist. He also enjoys playing his clarinet, but those hearing him play it do not enjoy his amateurish playing. He works as a cashier at the Krusty Krab, a job he dislikes. In a flashback in the episode, "The Original Fried Cook", it is revealed that Squidward had hair, but immediately loses it in a second. SpongeBob and Patrick consider Squidward their friend, but the feeling is not reciprocated. There have been indications, though, that Squidward cares more for SpongeBob than he is willing to admit. His archenemy is Squilliam (Dee Bradley Baker), the successful version of Squidward. He met him in his high school band class.His first appearance was in "Help Wanted". [7]

Captain Eugene Harold "Armor Abs" Krabs (Clancy Brown) is an extremely cheap and greedy red crab.[8] He lives in an anchor. He is the owner of the Krusty Krab, as well as SpongeBob and Squidward's employer. He also has a daughter named Pearl (Lori Alan) (who is a whale) but there have been no references to her mother/his wife. He has a grandfather named Redbeard. The Krusty Krab was originally a retirement home called "The Rusty Krab" when Mr. Krabs bought it after the war. But then it went bankrupt, so he changed it into a restaurant and re-named it "The Krusty Krab" In some episodes, it is shown that he has a mutual crush on Mrs. Puff. It is revealed in the episode "Sleepy Time" that he was born November 30, 1942.

Sheldon James Plankton (Doug Lawrence) is owner of the Chum Bucket and arch enemy of Mr. Krabs. He is always trying to steal the Krabby Patty Secret Formula but is always unsuccessful. He often thinks and speaks of evil anarchist points of view and wishes to rule the world. He sells chum which is disgusting slop of innards and blood that is often used to attract sharks and other predatory fish. He has a computer wife named Karen, who is actually a "W.I.F.E." (Wired Integrated Female Electroencephalograph). Karen usually gives Plankton ideas to steal the Krabby Patty formula, which he often censors out and takes them as his.

Garold "Gary" The Snail (Tom Kenny) is SpongeBob's pet sea snail. Within the series, snails are analogous to cats, so Gary almost always vocalizes like a feline.[9] Despite this, other characters can understand and communicate with him. Depicted as a level-headed character, Gary sometimes serves as a voice of reason for SpongeBob, and solves problems that his owner cannot. He is sometimes nicknamed "Gare-Bear" by SpongeBob, and it is revealed in "A Pal for Gary" that his full first name is Garold.

The characters of SpongeBob SquarePants have been well-received overall. The titular character SpongeBob has become very popular with both children and adults. The character's popularity has spread from Nickelodeon's original demographic of two to eleven-year-olds, to teenagers and adults,[14] including college campuses and celebrities such as Sigourney Weaver and Bruce Willis.[15] The popularity of SpongeBob translated well into sales figures. In 2002, SpongeBob SquarePants dolls sold at a rate of 75,000 per week, which was faster than Tickle Me Elmo dolls were selling at the time.[16] SpongeBob has gained popularity in Japan, specifically with Japanese women. Nickelodeon's parent company Viacom purposefully targeted marketing at women in the country as a method of building the SpongeBob SquarePants brand. Sceptics initially doubted that SpongeBob could be popular in Japan as the character's design is very different from already popular designs for Hello Kitty and Pikachu.[17] However, the characters have also attracted negative reception, including SpongeBob himself, who was listed as number four on AskMen's Top 10: Irritating '90s Cartoon Characters. SpongeBob SquarePants was ranked on TV Guide's top 50 cartoon characters.[18]

Arthur Brown, author of Everything I Need to Know, I Learned from Cartoons!, has compared Squidward's voice to that of Jack Benny's.[19]

Appearances in other media

The characters of SpongeBob SquarePants have been parodied various times in popular culture. In 2007, the Amsterdam-based company Boom Chicago created a SpongeBob parody called "Back to Work!" in which a Chinese Patrick refuses to go to work and advocates freedom of speech and rights of leisure and income.[20] During the same year, production company Camp Chaos created a SpongeBob parody entitled SpongeBong HempPants which features five of the series' characters parodied in the form of various drugs.[21] The series has received mixed reviews from television critics; Adam Finley of TV Squad believed the series sounded "hilarious on paper", but ultimately did not demonstrate its full potential.[21] SpongeBob and Patrick have a root were also referenced in Phineas and Ferb when they dug a hole and found a sponge and a seastar. SpongeBob and Patrick also have an appearance in the Disney show Good Luck Charlie when Charlie's parents have a pink square and a yellow star puppet and are performing a potty training show on a fake television set.