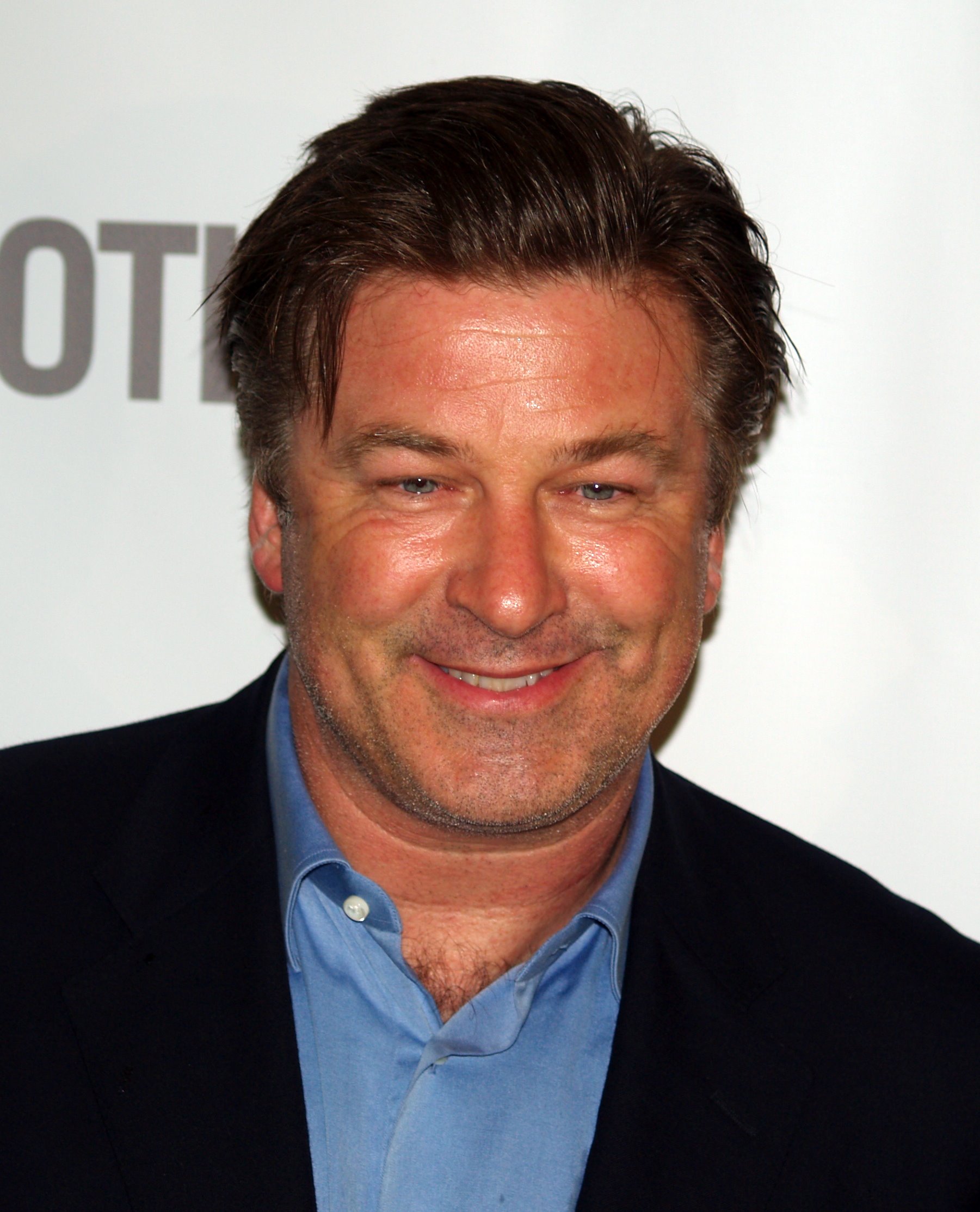 Alexander Rae "Alec" Baldwin III (born April 3, 1958) is an -nominated, and Emmy- and -winning, American . He is the oldest and most famous of the , and has starred in many movies and TV shows. He is also noted for having hosted "" multiple times. He is currently playing television executive in the NBC situation-comedy "".

Baldwin was born in , USA, the son of Carolyn Newcomb (née Martineau) and Alexander Rae Baldwin, Jr., a history/social studies teacher and football coach. [ [http://www.filmreference.com/film/97/Alec-Baldwin.html Alec Baldwin Biography (1958-)] , filmreference.com] Baldwin was raised in a Catholic family of Irish and French descent. [ [http://www.helenheart.com/alec/article/interview89.html Helen's Alec Baldwin site-Interview, 1989 ] ] [ [http://www.newsday.com/community/guide/lihistory/ny-hometown_alec,0,6869261.story?coll=ny-lihistory-navigation Newsday] ] He attended in Massapequa, Long Island, and played football there under Coach , who is in the . Baldwin worked as a at the famous . He attended from 1976 to 1979, where he was known as "Alex." After losing a student body president election, he transferred to to study acting at the Lee Strasberg Theatre Institute under Elaine Aiken and Geoffrey Horne. He returned to NYU in 1994 and graduated with a that year.

In 1986 Alec stared in a 4 hour mini-series, "Dress Gray"-- his first true venture into a feature role. Baldwin starred in this 4-hour miniseries as an honest cadet sergeant who tries to solve the mystery of a murdered homosexual classmate. The film, adapted by Gore Vidal from Lucian K. Truscott's novel. Set in a fictional academy during the Vietnam War, this thriller begins with the suspicious death of a cadet. A military doctor learns the incident was a homicide, but his superiors close ranks and order the doctor to rule the death a "drowning." The doctor describes the true circumstances surrounding the classmate's demise to a cadet sergeant, who sets out to find the killer. But because of his disagreements with the deceased and his former relationship with the dead man's sister, the cadet becomes the prime suspect in the case.

In 1986, he made his film debut with a minor role in "". In 1988, he appeared in "" and "". Both of these films were successes that raised his profile. His film career was then firmly established with his role as Jack Ryan in "The Hunt for Red October" (1990).

In 1991, Baldwin met his future wife on the set of the critically panned "The Marrying Man". He appeared with Basinger again in "The Getaway", a 1994 remake of the 1972 Steve McQueen film of the same name.

In a brief but memorable role, Baldwin played a ferocious sales executive in 1992's "", a part added to the film version of 's -winning stage play. He then chose to star in 1992's "" with , based on the Broadway play, rather than reprise his role as CIA analyst Ryan in another thriller, "". His film was a commercial flop, while scored back-to-back hits as Ryan.

Baldwin played the title character in another film that failed at the box office, 1994's "The Shadow". His late '90s roles also had a lukewarm reception. They included several thrillers, such as "The Edge" (with ), "" (with ) and "" (with ).

Baldwin then shifted more toward being a , including his nominated turn in 2003's gambling drama "" and in working with director and in "" and "".

Baldwin wrote an episode of "" entitled "Tabloid", which aired in 1998. He played the role of Dr. Barrett Moore, a retired plastic surgeon, in the series "". In 2001, Baldwin directed and starred in an all-star version of "The Devil and Daniel Webster" with , and . This film has yet to be released, however. The film became an asset of a federal bank trial in 2003, where financial investor Jed Barron, of Las Vegas, was convicted of bank fraud while financing the movie. The film's producer, David Glasser, was also under investigation. The film eventually was acquired by producer and his company.

In 2002, he appeared on two episodes of "Friends" as 's overly enthusiastic love interest, Parker. In the episode entitled "The One in Massapequa", Parker, seemingly clueless and curious about its history, comments that Massapequa sounds like a "magical place". In reality, Baldwin was born and raised in Massapequa.

In 2006, he starred in the film "Mini's First Time", alongside and . In 2007, the announced it would give the film, now titled "Shortcut to Happiness" a theatrical release in the spring. also announced they had acquired rights for the film. Baldwin also recently performed opposite in a romantic comedy, "".

On July 7, 2007, Baldwin presented at the American leg of . He also recorded two nationally distributed public service radio announcements on behalf of the Save the Club.

Baldwin stars in the -winning sitcom "", which won the 2007 and 2008 Emmy for Outstanding Comedy Series. Baldwin had met series creator and one of his co-stars, , during several tapings of "Saturday Night Live". He has received numerous honors for his work as TV exec Jack Donaghy, including a and . He was again nominated for the Emmy for Best Actor in a Television Comedy or Musical in 2007, for the role but lost to .

Who Wants To Be A Millionaire

Baldwin made his Broadway debut in 1986, in a revival of 's "Loot" alongside theatre veterans , , and Charles Keating. This production closed after three months.

His other Broadway credits include 's "" with and a highly acclaimed revival of ' "A Streetcar Named Desire"; his performance as garnered him a nomination for Best Actor. This production also featured , , , , and . Baldwin would receive an Emmy nomination for the television version of the production, in which both he and Lange reprise their roles. That version featured and .

In 1998 Baldwin played the title role in "" at the Public theater alongside and . The production was directed by . In 2004, Baldwin starred in a revival of "Twentieth Century" with .

On June 9, 2005, he appeared in a concert version of the musical "South Pacific" at . He starred as Luther Billis, alongside as Nellie and as Emile. The production was taped and telecast by on April 26, 2006. In 2006, Baldwin made theatre news in 's revival of 's "".

Baldwin has always had an active interest in politics. He recently revealed in a British magazine interview that he plans to leave acting in a few years to pursue a career in politics. When interviewed by the "", Baldwin was asked what public office he would consider running for, he replied:"If I ever ran for anything, the thing I would like to be is governor of New York." When asked if he was qualified, Baldwin answered: "That's what I hate about . His only credentials are that he ran a fitness program under some bygone president...I'm Tocqueville compared to Schwarzenegger." When asked why not be governor of , Baldwin replied: "Then I would have to live in California. And who wants to live in California?" [ [http://www.nytimes.com/2006/10/29/magazine/29wwln_q4.html?_r=1&oref=slogin Getting In on the Sitcom Act - New York Times ] ]

During his appearance on "" on December 11, 1998, eight days before President was to be impeached, Baldwin said "if we were in another country... we would stone to death and we would go to their homes and kill their wives and their children. We would kill their families, for what they're doing to this country." [ [http://www.msnbc.msn.com/id/18291856/ "'Scarborough Country' for April 23"] , "MSNBC", April 23, 2007.] Baldwin later apologized to Hyde for his remarks and has promised never to re-air the show.Fact|date=December 2007

Baldwin has called a terrorist, and claimed that "he terrorizes our enemies abroad and innocent citizens here at home indiscriminately." [ [http://www.huffingtonpost.com/alec-baldwin/will-they-go-to-court_b_15875.html Will They Go to Court?] ] He later recanted this statement, saying that Cheney was not a terrorist but rather "a lying, thieving whore and a murderer of the ". [ [http://www.huffingtonpost.com/alec-baldwin/republicans-married-into-_b_16131.html Republicans Married into the Wrong Family] ] Baldwin has continued to level strong criticisms at the Bush Administration on his labeling Bush a "trust fund puppet" and Cheney a "constitution-hating sociopath" and a "hate-filled maniac". [ [http://www.huffingtonpost.com/alec-baldwin/delay-is-the-new-republic_b_18785.html Alec Baldwin: DeLay Is the New Republican - The Huffington Post ] ]

In 2002, ger threatened to sue Baldwin for his appearance on the show, during which Baldwin claimed that Drudge was and had tried to hit on him in the hallway at ABC studios in Los Angeles when he was doing the show.

On March 26, 2006, Baldwin guest-hosted 's talk show on WABC radio in . During the show, talk show hosts and called the show to confront Baldwin about his political comments over the years. Hannity also claimed that Baldwin had been scheduled to appear on his show first, but Baldwin asserted that he never had such a deal, and that he'd never have agreed to go on Hannity's show. The back-and-forth continued for about 10 minutes until Levin asked, "why is your wife so mad at you anyway," at which point Baldwin said, "we're done," and walked out of the studio. Baldwin later wrote in his blog at the that WABC President and General Manager phoned him on March 28 to "apologize for Sean's attacks." In the same entry, Baldwin also noted that "Levin made a comment connected to my divorce proceedings... I thought that Levin, whoever he may be and whatever code he does or does not operate by, had crossed a line and I was under no obligation to continue in that vein." [ [http://www.newsmax.com/archives/ic/2006/3/26/221245.shtml Alec Baldwin v. Sean Hannity in Radio Donnybrook] ]

Baldwin once compared the 2000 presidential election to the : "I know that's a harsh thing to say, perhaps, but I believe that what happened in 2000 did as much damage to the pillars of as terrorists did to the pillars of commerce in New York City." [ [http://www.artistsnetwork.org/news3/news138.html Alec Baldwin says disputed vote damaged democracy] ]

Baldwin and commentator Bill O'Reilly have been in a number of conflicts. Despite their political differences, however, Baldwin stated on his blog after an interview with O'Reilly, that he "was aggressive, but was a gentleman throughout", and also called O'Reilly a "talented broadcaster."

Baldwin serves on the board of .

Baldwin's marriage to came to an end in 2000 when they officially . A year later, Basinger filed for divorce in Los Angeles Superior Court. In March 2004, Baldwin and Basinger agreed to share custody of their daughter, Ireland Eliesse (born October 23, 1995). The judge presiding over the case issued a , requiring Baldwin and Basinger to avoid commenting publicly about the case.

On April 11, 2007, Ireland (then age 11) failed to answer a pre-arranged phone call from her father, and Baldwin left an angry message for her, calling her a "rude, thoughtless little pig". The child's private message was then leaked to the celebrity website on April 19, 2007.

Baldwin is an animal rights activist and follows a mostly diet. He is a strong supporter of and has done work for the organization including narrating the video entitled 'Meet your Meat'. [cite web |url=http://www.usatoday.com/life/people/2005-08-22-baldwin-award_x.htm |title=USA Today: Alec Baldwin to receive award at PETA gala]