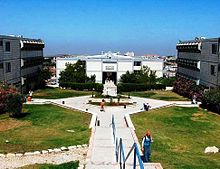 The center was founded in 1982 to serve as a regional branch of Bar-Ilan University. Originally located in the settlement of Kedumim[citation needed], it moved to Ariel in order to expand. Its association with Bar-Ilan University lapsed in the 2004–05 academic year with the school administration's decision to become independent and pursue university status. the center has 26 departments for B.A, M.A, B.Sc and B.Arch studies, in three faculties and three schools. The university center contains approximately 14,000 students (as of August 2011) and it has and extension in Tel Aviv for studies and continuation. All of the degrees are recognized by the Council for Higher Education in Israel.

In 2005, the Israeli government voted to support upgrading the College to university status. On one level, this was viewed as a political decision to appease more conservative elements in Israeli politics before the implementation of the disengagement plan; on another, the high quantity and quality of academic research by the faculty could not be ignored. The reaction from the academic community in Israel was not openly receptive, partly because of its location beyond the Green Line, as well as allowing a new institution into the fold. The change of status was not immediate since the decision only allowed the College to apply for revision by the Council for Higher Education in Israel, which must ultimately approve the change. University status is an issue of prestige, increased government funding for research, as well as the ability to issue doctorate degrees.

In July 2006 the Council for Higher Education rejected the proposal (which had been paired with an initiative by Shimon Peres to unite several regional colleges in the Galilee into one umbrella university). The Council accepted the conclusion of a committee it had itself set up that decided that no new university would be established in Israel in the next five years. The committee did not discuss, or perhaps avoided the discussion of, the merits or shortcomings of the two initiatives. Subsequently, criticism was directed at the Council for ignoring the decision of the government.[8]

In August 2007, the "College of Judea and Samaria", in the interim period and anticipation of achieving official university status, was renamed by the Certification Authorities Registrar the "Ariel University Center of Samaria".[9] Although Prime Minister Ehud Olmert endorsed the change, both Minister of Education Yuli Tamir and the Council for Higher Education vowed to block it,[10] with the latter announcing in 2008 that they would not recognise degrees awarded by the college.[11] The name change was recognised in 2010, although the college remains without university accreditation.[12]

AUC hosts visiting lecturers from universities around the world. In 2010 University of Hartford communications professor Don Ellis taught the course "Communication Issues and Political Conflict." He said: "My only goal is to help them improve their critical thinking skills. I don't expect that either side will acknowledge the other side as being right."[13] 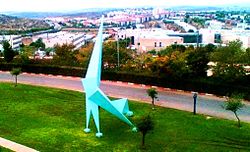 View towards the lower campus and the settlement of Ariel.

The University Center member of the International Association of Universities (IAU).[14]

The Center has signed an agreement of academic cooperation with more than 51 higher education institutions around the world, from the United States, Russia, France, Germany, Brazil, Portugal, Costa Rica, Ecuador, Argentina, Turkey, Poland, Ukraine, Georgia, Kazakhstan, Taiwan, Armenia, etc.[citation needed][15] there is a partnership between the University of Toronto and the Centre for the Masters in Business Administration MBA.[citation needed]

In 2008 a branch was established in the University Center of the Global Association of Risk Professionals operator courses and international conferences in university center.[16]

The center is set about by the Microsoft IT Academy and authorized to make certification exams Microsoft Network Administration.[17] In addition, the Center has a unique qualification: Gold CPLS: Certified Partner for Learning Solutions.[17][not in citation given]

In 2011 Ariel University Center signed a cooperation agreement with the Skolkovo innovation center known as "Silicon Valley" in Russia. Following this agreement will be established in the country "center of Israel – Scolkovo" (Israel Skolkovo Gateway), to give Israeli companies to access capital resources and manpower of Scolkovo.[18] In addition, the Center serves as a representative of the Israel Academy of Sciences and Humanities cooperation with the Russian Academy of Sciences.[19][20]

University Center participates in the project Masa Israel Journey in which students for semester and year study in Ariel, about 30% of students coming to study in Ariel immigrants to Israel at the end of the project.[21]

In August 2011, the university's technology transfer company was to sign a partnership agreement with Moscow's Skolkovo innovation center.[4] It was intended to afford Israeli start-ups access to Russian funding established by Russian President Dmitry Medvedev, and create Skolkovo Gateway Israel, a center formed to connect to Russia's Silicon Valley.[22]

In early 2011, 145 Israeli academics announced they were boycotting the university to protest Israeli settlement expansion.[3] They wrote in their petition, "Ariel is not part of the sovereign territory of Israel, and we therefore cannot be required to go there."[23] This came after the Spanish Housing Ministry disqualified the university from taking part in an international architectural competition in 2009. The Spanish government explained that their decision to ban the university from taking part in the competition was a result of it being located in occupied territory in the West Bank.[4] The Anti-Defamation League asked the Spanish Government and the US Department of Energy to overturn the disqualification of Israeli researchers from an international solar energy competition in Madrid "The decision by the Spanish government to disqualify the Israeli researchers is unwarranted, biased and clearly discriminatory," said Abraham H. Foxman, ADL’s national director, in a statement. "This unacceptable action introduces politics into an important scientific competition where politics has no place," he said[24] The British Association of University Teachers (AUT) also boycotted Bar-Ilan University in April 2005. The AUT justified the boycott on the grounds that Bar-Ilan University's running of a university in the occupied West Bank amounted to being "directly involved with the occupation of Palestinian territories contrary to United Nations resolutions". The boycott called for members of the AUT to boycott Bar-Ilan University "until it severs all academic links with the College of Judea and Samaria and with any other college located in an illegal settlement in the Occupied Territories."[25] The boycott was subsequently rescinded later that year in May.[26] 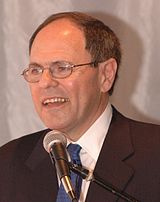