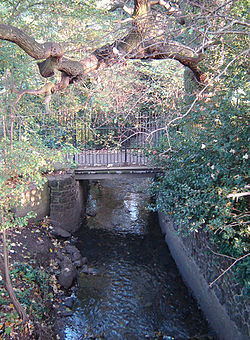 The River Moselle visible above ground on its way through Tottenham Cemetery. This now-modest stream once posed a significant flooding threat to the area. (November 2005)

The River Moselle, also referred to as Moselle Brook, is in North London and flows through Tottenham towards the Lea Valley. The river was originally a tributary of the River Lea, but it now flows into Pymmes Brook, another Lea tributary.

The name derives from 'Mosse-Hill' in Hornsey, the high ground containing one of the river's sources, and bears no direct etymological relationship to the major continental Moselle River.[1] The hill area also gave its name to the district of Muswell Hill and for a time the river was known as the Moswell.

Unlike the Hackney Brook further south, the Moselle is not a "lost river". Although long stretches have been culverted (Moselle Avenue in Noel Park runs above the culverted river), it does not disappear into the London sewer system and much of its route can be easily traced. It can be seen flowing overground in Tottenham Cemetery (right) and Lordship Recreation Ground, and gave its name to the Broadwater Farm area between the two.

The Moselle has quite a modest flow in modern times, but it once posed a serious flooding threat to Tottenham. Until the 19th century, the whole of the river remained above ground, but in 1836 the stretch around Tottenham High Road and White Hart Lane was covered over. More major culverting occurred in 1906 and subsequent years, so that now the river is completely enclosed from Tottenham Cemetery to the point at which it runs into Pymme's Brook. The river continued to burst out of its confinement and flood the area around the High Road near the junction of Lordship Lane and around Scotland Green. This was an annual event until the late 1960s, when the culverting was rebuilt as the area was redeveloped. During the construction of the Broadwater Farm Estate in 1967, there was such concern about flood risks from the river that all public walkways on the estate were elevated to first-floor level and no housing or shops were built at ground level.