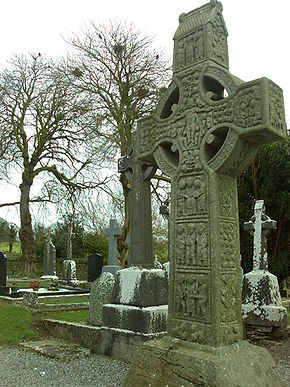 Muiredach's High Cross is a high cross from the 10th or possibly 9th century, located at the ruined monastic site of Monasterboice, County Louth, Ireland. There are two other high crosses at Monasterboice; in local terms Muiredach's cross is also known as the South Cross. Muiredach's cross has been described as the most beautiful specimen of Celtic stonework now in existence;[citation needed] and the crosses at Monasterboice have been stated to be Ireland's greatest contribution to European sculpture. Recently concerns have been raised over the well-being of Muiredach's cross; and it has been suggested that the cross should possibly be brought indoors in order to protect it from the elements. 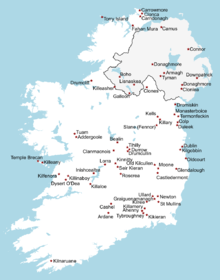 Location of high crosses in Ireland.

Irish high crosses are internationally recognized icons of early medieval Ireland. They are usually found on early church sites and can be either plain or decorated. High crosses served a variety of functions including, liturgical, ceremonial, and symbolic uses. They were also used as markers for an area of sanctuary around a church; as well as focal points for markets, which grew around church sites.[1] The "greatest",[1] or "classic",[2] Irish high crosses can be found at Durrow Abbey, the Abbey of Kells, and at Monasterboice. These high crosses are decorated with panels inscribed with biblical themes; and are thought to be influenced from late antiquity and early medieval Rome. Such 'classic' high crosses comprise the largest corpus of biblical sculpture in all of Europe, in the last quarter of the first millennium CE. The sculpted panels are thought to have been originally painted, though no traces of paint survive today.[2] On such high crosses, the east face tends to show scenes from the Old Testament and the Book of Revelation; while the west face shows scenes from the New Testament. High crosses can be dated from the inscriptions they bear; and it is difficult to date the majority of the plain and undecorated high crosses. The earliest Irish high crosses, at Kinnity, County Offaly, have been dated to 846–862 CE. Both Muiredach's cross and the Cross of the Scriptures at Clonmacnoise have been dated to about 900–920 CE.[1] High crosses are thought to have originated as stone versions of decorated wooden or metal crosses; and the stone crosses which survive today are considered to be the last phase of development of the high cross. Early forms are thought to have been made of wood, with ornamented panels of bronze sheeting; and would have been much smaller than the grand high crosses which survive today. Irish high crosses are considered to have been derived from stone crosses in Britain, where they became popular in the 8th century.[3] 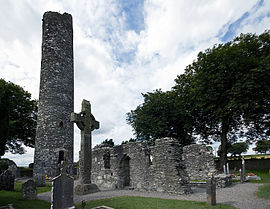 Ruinous Monasterboice today. Pictured is a round tower, church ruins and one of the site's three early mediaeval high crosses.

Muiredach's High Cross is one of three surviving high crosses located at Monasterboice (Gaeilge: Mainistir Bhuithe, "Buithe's monastery"). The monastic site is said to be founded in the 6th century, by St Buithe. It is most famous for its 9th and 10th century high crosses—most notably Muiredach's High Cross.[4] These crosses are all made of sandstone and are referred to as the North, West, and South Crosses. It is not certain whether they stand in their original locations. The South Cross is commonly known as Muiredach's cross because of an inscription on the bottom of the west-face. The inscription reads ÓR DO MUIREDACH LAS NDERNAD IN CHROS, which translates from Gaeilge as "a prayer for Muiredach who had this cross made". It is thought that this Muiredach is likely Muiredach mac Domhnall (died 923), who was one of the monastery's most celebrated abbots; he was also the abbot-elect of Armagh and also the steward of the southern Uí Néill. There is, however, another abbot named Muiredach who died in 844. Another possibility is that Muiredach may refer to Muiredach mac Cathail (died 867); a king whose territory included the site of the monastery.[4]

Every piece of the cross is dived into panels which are decorated with carvings. The carvings are remarkably well preserved, however, they certainly would have originally had much finer detail. Even so, certain details about clothing, weapons, and other things, can still be clearly made out. Biblical themes dominate the carved panels; though there are pieces which feature certain geometric shapes and interlace ornaments.[4]

20th century Irish archaeologist Robert Alexander Stewart Macalister noted that there are 124 figures sculpted upon the panels of the cross—119 of which shown in some form of costume. The cross is not unlike other works of Insular art where the artist has represented people in contemporary costume. All, except one, of the figures is depicted bare-headed. The lone figure with headgear is Goliath, who wears a conical helmet.[7] Generally the hair is worn clipped in a straight line over the forehead, though in some cases it is shown to be distinctly curly. Many of the figures have no facial hair, though several of them wear very long moustaches, with heavy ends which hang down to the level of the chin. There are very few beards represented; those shown with beards are Adam, Cain, Moses and Saul.[8] Macalister considered that the artist excelled in the geometric and abstract patterns which appear on the cross. On the ring surrounding the head of the cross, there are 17 different patterns. Macalister stated that Celtic geometric patterns fall into three categories: spiral, interlace, and key-patterns.[9]

Concerns over the conservation of the Cross

Recently there have been concerns raised over the safety and protection of the cross. In 2004 Barry McGahon, chairperson of the Monasterboice Tour Guides, stated to an Irish newspaper that it was not well protected; and suggested that a railing around the cross would temporally keep people from interfering with it. McGahon stated that the cross had begun to take longer drying out and that it seemed like rain was seeping into it. He added that acid rain and pollution from a newly opened M1 motorway would have adverse effects upon the cross.[10] In 2008, Peter Harbison, professor of archaeology, advised that they should be brought indoors to protect them from the elements. He stated that if they were not so-protected they would continue to decay—as sandstone decomposes easily.[11]

In about 2008 Harbison stated that the crosses at Monasterboice could probably be regarded as Ireland's greatest contribution to European sculpture. In April 2009 The Irish Times reported that the Government of Ireland was about to submit a list of sites—among them Monasterboice—to UNESCO to be considered a World Heritage Site.[11]

Panels A and B

These panels appear on the under-side of the cross.

Key to the panels on the North and South faces.