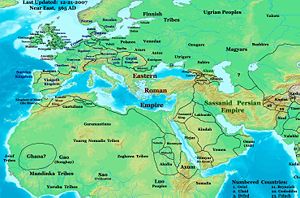 Near East in 565 AD, showing the kingdom of Aksum and its neighbors

Axum or Aksum is a city in northern Ethiopia which was the original capital of the eponymous kingdom of Axum. Population 56,500 (2010). Axum was a naval and trading power that ruled the region from ca. 400 BC into the 10th century. The kingdom was also arbitrarily identified as Abyssinia, Ethiopia, and India in medieval writings.

Located in the Mehakelegnaw Zone of the Tigray Region near the base of the Adwa mountains, Axum has an elevation of 2,131 meters. It is the administrative center of La'ilay Maychew woreda.

Due to their historical value, in 1980 UNESCO added Aksum's archaeological sites to its list of World Heritage Sites.

For more details on the early history of Axum, see Aksumite Empire.

Axum was the center of the marine trading power known as the Aksumite Kingdom, which predated the earliest mentions in Roman era writings. Around 356, its ruler was converted to Christianity by Frumentius. Later, under the reign of Kaleb, Axum was a quasi-ally of Byzantium against the Persian Empire. The historical record is unclear, primary sources limited mainly to ancient church records.

It is believed it began a long slow decline after the 7th century due partly to Islamic groups contesting trade routes. Eventually Aksum was cut off from its principal markets in Alexandria, Byzantium and Southern Europe and its trade share was captured by Arab traders of the era. The Kingdom of Aksum was finally destroyed by Gudit, and eventually the people of Aksum were forced south and their civilization declined. As the kingdom's power declined so did the influence of the city, which is believed to have lost population in the decline similar to Rome and other cities thrust away from the flow of world events. The last known (nominal) king to reign was crowned ca. 10th century, but the kingdom's influence and power ended long before that.

Its decline in population and trade then contributed to the shift of the power center of the Ethiopian Empire so that it moved further inland and bequeathed its alternative place name (Ethiopia) to the region, and eventually, the modern state.[1] 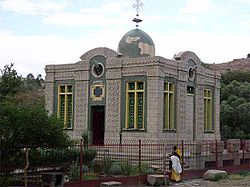 The Chapel of the Tablet

The Kingdom of Aksum had its own written language called Ge'ez, and also developed a distinctive architecture exemplified by giant obelisks, the oldest of which (though much smaller) date from 5000–2000 BC.[2] This kingdom was at its height under King Ezana, baptized as Abreha, in the 4th century (which was also when it officially embraced Christianity).[3]

The Ethiopian Orthodox Church claims that the Church of Our Lady Mary of Zion in Aksum houses the Biblical Ark of the Covenant in which lie the Tablets of Law upon which the Ten Commandments are inscribed.[4] This same church was the site where Ethiopian emperors were crowned for centuries until the reign of Fasilides, then again beginning with Yohannes IV until the end of the empire. Axum is considered to be the holiest city in Ethiopia and is an important destination of pilgrimages.[4] [5]Significant religious festivals are the T'imk'et Festival (known as the Epiphany in western Christianity) on 7 January and the Festival of Maryam Zion in late November.

In 1937, a 24-metre tall, 1,700-year-old Obelisk of Axum broken into five parts and lying on the ground, was found and shipped by Italian soldiers to Rome to be erected. The obelisk is widely regarded as one of the finest examples of engineering from the height of the Axumite empire. Despite a 1947 United Nations agreement that the obelisk would be shipped back, Italy balked, resulting in a long-standing diplomatic dispute with the Ethiopian government, which views the obelisk as a symbol of national identity. In April 2005, Italy finally returned the obelisk pieces to Axum amidst much official and public rejoicing, Italy also covered the $4 million costs of the transfer. UNESCO has assumed responsibility for the re-installation of this stele in Axum, and as of the end of July 2008 the obelisk has been reinstalled (see panographic photos in external links below). Rededication of the obelisk took place on 4 September 2008 in Paris, France with Ethiopian Prime Minister Meles Zenawi dedicating the obelisk to Italian President Giorgio Napolitano for his kind efforts in returning the obelisk.

The Axumite Empire has a longstanding relationship with Islam. According to ibn Hisham,[6] when Prophet Muhammad faced oppression from the Quraish clan, he sent a small group that included his daughter Ruqayya and her husband Uthman ibn Affan to Axum. Ashama ibn Abjar, the King of Axum, gave them refuge and protection and refused the requests of the Quraish clan to send these refugees back to Arabia. These refugees did not return until the sixth year of the Hijra (628), and even then many remained in Ethiopia, eventually settling at Negash in eastern Tigray.

There are different traditions concerning the effect these early Muslims had on the ruler of Axum. The Muslim tradition is that the ruler of Axum was so impressed by these refugees that he became a secret convert.[7] On the other hand, Arabic historians and Ethiopian tradition state that some of the Muslim refugees who lived in Ethiopia during this time converted to Orthodox Christianity. There is also a second Ethiopian tradition that, on the death of Ashama ibn Abjar, Muhammed is reported to have prayed for the king's soul, and told his followers, "Leave the Abyssinians in peace, as long as they do not take the offensive."[8] 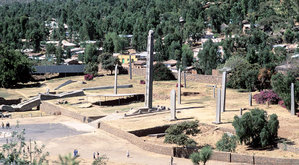 Northern Stelae park, with a neighborhood in the background

Other features of the town include St Mary of Zion church, built in 1665 and said to contain the Ark of the Covenant (a prominent twentieth-century church of the same name neighbours it), archaeological and ethnographic museums, the Ezana Stone written in Sabaean, Ge'ez and Ancient Greek in a similar manner to the Rosetta Stone, King Bazen's Tomb (a megalith considered to be one of the earliest structures), the so-called Queen of Sheba's Bath (actually a reservoir), the fourth-century Ta'akha Maryam and 6th-century Dungur palaces, the monasteries of Abba Pentalewon and Abba Liqanos and the Lioness of Gobedra rock art.

Local legend claims the Queen of Sheba lived in the town.

Axum University was established in Axum in May 2006 on a green field site, four kilometers from the town center; the inauguration ceremony was held on 16 February 2007. The current area of the campus is 107 hectares, with ample room for potential expansion.[citation needed]

The establishment of a university in Axum is expected to contribute much to the ongoing development of the country in general and of the region in particular.