A cat’s whisker detector (sometimes called a crystal detector) is an antique electronic component consisting of a thin wire that lightly touches a crystal of semiconducting mineral to make a crude point-contact rectifier. Developed by early radio researchers Jagadish Chandra Bose, G. W. Pickard and others, this device was used as the detector in early crystal radios, from about 1906 through the Second World War. It gave this type of radio receiver its name. It was the first type of semiconductor diode, and in fact the first semiconductor electronic device. The term cat's whisker was also sometimes used to describe the crystal receiver itself. Cat's whisker detectors are obsolete and are now only used in antique or antique-reproduction radios. 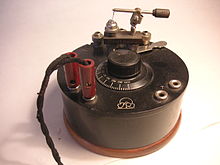 A small portable crystal radio, with a cat's whisker detector visible at top

The wire touching the surface of the crystal formed a crude and unstable metal–semiconductor or p-n point-contact junction, forming a Schottky barrier diode. This junction conducts electric current in only one direction and resists current flowing in the other direction. In a crystal radio, its function was to rectify the radio signal, converting it from alternating current to a pulsing direct current, to extract the audio signal (modulation) from the radio frequency carrier wave.

Only certain sites on the crystal surface functioned as rectifying junctions. Thus, the device was very sensitive to the exact geometry and pressure of contact between wire and crystal. Therefore it was made adjustable, and a usable point of contact was found by trial and error before each use. The wire was suspended from a moveable arm, and was dragged across the crystal face by the operator until the device began functioning. In a crystal radio, the operator would tune the radio to a strong local station if possible, and then adjust the cat's whisker until the station or static sounds was heard in the radio's earphones. This required some skill and a great deal of patience; even then a good contact could easily be lost by the slightest vibration. An alternate method of adjustment was to use a battery-operated buzzer to generate a test signal. The spark at the buzzer's contacts functioned as a weak radio transmitter, so when the crystal began functioning the buzz could be heard in the earphones, and the buzzer was turned off. The temperamental, unreliable action of the crystal detector was a barrier to its acceptance as a standard component in commercial radio equipment,[1] and was one reason for its rapid replacement by vacuum tubes after 1920. Frederick Seitz, a later semiconductor researcher, wrote:

Such variability, bordering on what seemed the mystical, plagued the early history of crystal detectors and caused many of the vacuum tube experts of a later generation to regard the art of crystal rectification as being close to disreputable.[2] 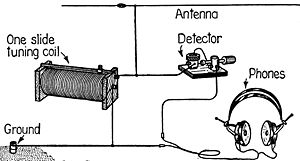 Diagram of a crystal set using a cat's-whisker detector. 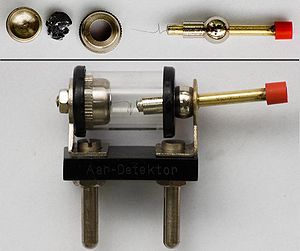 A natural mineral crystal forms the semiconductor side of the junction. The most common crystal used was galena (PbS, lead sulfide), a naturally occurring ore of lead. Galena is a semiconductor with a small bandgap of about 0.4 eV, and is used without treatment directly as it is mined. Galena with good detecting properties is rare and has no reliable visual characteristics distinguishing it from galena samples with poor detecting properties. A rough pebble of detecting mineral about the size of a pea was mounted in a metal cup, which formed one side of the circuit. The electrical contact between the cup and the crystal had to be good, because this contact must not act as a second rectifying junction. To make good contact with the crystal, it was either clamped with setscrews or mounted in solder. Because the relatively high temperature of tin-lead solder can damage many crystals, a low melting point (well under 200°F) alloy such as Wood's metal was used. One surface was left exposed to allow contact with the cat's whisker wire.

The "cat's whisker", a springy piece of thin metal wire, formed the metal side of the junction. Phosphor bronze wire of about 30 gauge was commonly used because it had the right amount of springiness. It was mounted on an adjustable arm with an insulated handle so that the entire exposed surface of the crystal could be probed from many directions to try to find the most sensitive spot. Cat's whiskers in simple detectors were straight or curved, but most professional cat's whiskers had a coiled section in the middle that served as a spring.[3] The crystal required just the right gentle pressure by the wire; too much pressure caused the device to conduct in both directions. Precision detectors often used a metal needle instead of a cat's whisker, mounted on a thumbscrew-operated leaf spring to adjust the pressure applied. 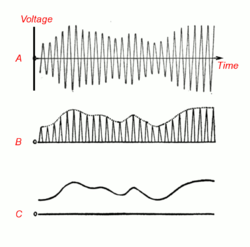 How a crystal detector works in a radio receiver.[4][5] (A) The amplitude modulated radio signal from the receiver's tuning section. The rapid oscillations are the radio frequency carrier wave. The audio signal (the sound) is contained in the slow variations (modulation) of the size of the waves. This signal cannot be converted to sound by the earphone, because the audio excursions are the same on both sides of the axis, averaging out to zero, resulting in no net motion of the earphone's diaphragm. (B) The crystal conducts current in only one direction, stripping off the oscillations on one side of the signal, leaving a pulsing direct current whose amplitude does not average zero but varies with the audio signal. (C) A bypass capacitor across the earphone smoothes the waveform, removing the radio frequency carrier pulses, leaving the audio signal.

Historically, many other minerals and compounds besides galena were used for the crystal, the most important being iron pyrite ("fool's gold", iron disulfide), silicon, molybdenite (MoS2), and silicon carbide (carborundum, SiC). Some were used with gold or graphite "cat's whiskers". Another type had a crystal-to-crystal junction instead of a "cat's whisker", with two crystals mounted facing each other. One crystal was moved forward on an adjustable mount until the crystal faces touched. The most common of these was a zincite-bornite (ZnO-Cu5FeS4) junction trade-named Perikon, but zincite-chalcopyrite, silicon-arsenic and silicon-antimony junctions were also used. The goal of researchers was to find junctions that were not as sensitive to vibration and unreliable as galena and pyrite. Some of these other junctions, particularly carborundum, were stable enough that they used a more permanent spring-loaded contact rather than a "cat's whisker".[6] For this reason carborundum detectors were preferred in large commercial wireless stations, and military and shipboard stations which were subject to vibration from waves and gunnery exercises. Another quality desired was the ability to withstand high currents without damage, because in wireless stations the fragile detector junction could be "burned out" by atmospheric electric charge from the antenna, or high radio frequency current leaking into the receiver from the powerful spark-gap transmitter during transmissions. Carborundum detectors, which used large area contacts, were also particularly robust in this regard.

To increase sensitivity, some of these junctions such as silicon carbide were "biased" by connecting a battery and potentiometer across them to provide a small constant forward voltage across the junction.[7]

The oxide layers that form on many ordinary metal surfaces have semiconducting properties, and detectors for crystal radios have been improvised from a variety of everyday objects such as rusty needles and corroded pennies. The foxhole radio [5] was a crystal radio receiver improvised by soldiers during World War II without access to conventional sets. It used a razor blade and a safety pin or lead pencil to form a demodulating junction. Much patience was required to find an active detecting site on the blade. Stray rectifying junctions between metal parts of radio transmitter installations are still a source for interference, because they can radiate harmonics of the transmitter frequency.

The modern circuit symbol for a diode originated as a schematic drawing of a cat's whisker detector.

Unlike modern radio stations that transmit sound, the first radio transmitters during the first three decades of radio transmitted information by telegraphy, turning the transmitter on and off with a switch called a telegraph key to spell out messages in Morse code, consisting of "dots" and "dashes". So early radio receiving apparatus merely had to detect the presence or absence of the radio signal, not convert it into audio. The device that did this was called a detector. The crystal detector was the most successful of many detector devices that were used in the early days of radio. It replaced electrolytic, magnetic, and particularly coherer detectors in radio receivers around 1906. Later, when AM radio transmission was developed to transmit sound, around World War 1, crystal detectors proved able to receive this as well.

The "unilateral conduction" of crystals, as it was then called, was discovered by Ferdinand Braun, a German physicist in 1874 at the University of Würzburg, before radio had been invented. Based on this work G.W. Pickard developed the cat's whisker diode using a silicon crystal, which was patented in 1906. However, Bengali scientist Jagadish Chandra Bose was the first to use a crystal to detect radio waves, in his experiments with microwaves in 1894, applying for a patent on a galena detector in 1901.

When these devices were in common use, more advanced proprietary versions of "permanent" detectors were developed, many of them by G. W. Pickard, who tested more than 30,000 combinations of crystal and wire contacts.[8] One consisted of various combinations of pairs of different crystals such as Zincite touching Bornite or Chalcopyrite, in fairly heavily spring-loaded contact. Pickard named this the Perikon detector, from "PERfect pIcKard cONtact". Other detectors patented by Pickard included the common crystal iron pyrite. Pickard has the distinction of having brought silicon into use as a detector, patenting it in 1906. At nearly the same time, General Henry Harrison Chase Dunwoody patented the use of the silicon carbide (carborundum) detector, an artificial substance created accidentally during attempts by Edward Acheson to create diamonds.

Unamplified radio receivers, most of which were crystal radios, were the only way to receive radio signals during most of the wireless telegraphy era, which ended around 1920. Mineral detectors were largely superseded by vacuum tubes, invented in 1906, although the expense of tube receivers meant that full replacement took several decades. By the 1920s crystal radios were relegated to use by hobbyists and youth groups.

A crystal detector in commercial form from the 1960s

The point-contact semiconductor detector was subsequently resurrected around World War II because of the military requirement for microwave radar detectors. Vacuum tube detectors do not work at microwave frequencies. The small area of the point contact minimized minority carrier storage and capacitance, making these diodes fast enough to function at radar frequencies. Silicon and germanium point contact diodes were developed. Wartime research on PN junctions in crystals paved the way for the invention of the transistor in 1956.(Transistor#History 1947? Silicon transistor 1954?)[citation needed] The first transistors also used cat's whisker contacts.

The germanium diodes that became widely available after the war proved to be as sensitive as galena and didn't require any adjustment, so they replaced cat's whisker detectors in the few crystal radios still being made, largely putting an end to the manufacture of this antique radio component. Although cat's whisker detectors are obsolete, modern point-contact silicon detectors are still commercially produced.[9] Thus the point contact method used to make these first semiconductor diodes 100 years ago is still being used today.