Mashrabiya or Shanasheel (Arabic: مشربية or شناشيل‎) is the Arabic term given to a type of projecting oriel window enclosed with carved wood latticework located on the second storey of a building or higher, often lined with stained glass. The mashrabiy (sometimes shanshool or rushan) is an element of traditional Arabic architecture used since the middle ages up to the mid twentieth century. It is mostly used on the street side of the building; however, it may also be used internally on sahn side.

Mashrabiyas were mostly used in houses and palaces although sometimes in public buildings such as hospitals, inns, schools and government buildings. They are found mostly in the mashriq – i.e. east of the Arab world, but some types of similar windows are also found in the maghrib (west of the Arab world). They are very prevalent in Iraq, the Levant, Hejaz and Egypt. They are mostly found in urban settings and rarely in rural areas. Basra is often called “the city with Mashrabiyas”. 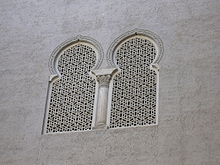 Restored mashrabiya from the Aljafería palast (10th c.), in Spain.

Mashrabiya is derived from the triliteral root Š-R-B, which generally denotes drinking or absorbing. There are two theories for its name, the most common one is that the name was originally for a small wooden shelf where the drinking water pots were stored. The shelf was enclosed by wood and located at the window in order to keep the water cool. Later on, this shelf evolved until it became part of the room with a full enclosure and retained the name despite the radical change in use.

The second theory is that the name was originally mashrafiya, derived from the verb Ashrafa, to overlook or to observe. During the centuries the name slowly changed due to changing accents and influence of non-Arabs speaking Arabic.

There is no point in history that can be dated as the first time they appeared; however, the earliest evidence on use of the Mashrabiya as it currently is dates back to the twelfth century in Baghdad during the Abbasid period. Whatever is left in Arabic cities is mostly built during the late nineteenth century and early to mid twentieth century although some Mashrabiyas can be found that are three or four hundred years old. Unfortunately, very few are restored.

In Iraq in the twenties and thirties of the twentieth century, the designs of the latticework was affected by the Art Deco and Art Nouveau movements of the time. This was evident in Al Rasheed street Mashrabiyas up to the late sixties before most of them were demolished. 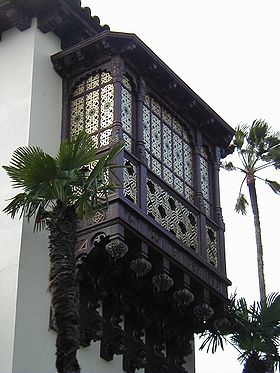 Egyptian style Mashrabiya, projecting alone from part of the room and not reaching to the room floor, hence allowing for a Dakkah or sitting area in front of the window.

Traditionally, houses are built of adobe, brick or stone or a combination of that. Wooden houses are not popular and hardly ever found. Building heights in urban setting range from two to five floors (although Yemeni houses can reach up to seven floors) with the Mashrabiyas on the second level and above. The roofs are usually built using wooden or steel beams with the areas between filled with brick in a semi vault style. These beams were extended over the street, enlarging the footprint of the upper floor. The upper floor is then enclosed with latticework and roofed with wood. The projection is cantilevered and does not bear the weight of traditional building materials.

There are different types of Mashrabiyas, and the latticework designs differ from region to region. Most Mashrabiyas are closed where the latticework is lined with stained glass and part of the Mashrabiya is designed to be opened like a window, often sliding windows to save space; in this case the area contained is part of the upper floor rooms hence enlarging the floor plan. Some Mashrabiyas are open and not lined with glass, in this case the Mashrabiya works like a balcony and the space enclosed is independent of the upper floor rooms and accessed through those rooms with windows opening towards it, sometimes even the woodwork is reduced making look much more similar to a regular roofed balcony; this type of Mashrabiya is mostly used if there is a view facing the house rather than other houses, such as a river, a cliff below or simply a farm.

One of the major features of the Mashrabiya is for privacy, an essential aspect of Arabic culture. A good view of the street can be obtained by the occupants without being seen, preserving the private interior without depriving the occupants from a vista of the public outside. It is said that Mashrabiyas are the ornaments of the rich as it cost a lot of time and finance to produce them.

The wooden screen with openable windows gives shade and protection from the hot summer sun while allowing the cool air from the street to flow through. The designs of the latticework are usually with smaller opening in the bottom part and larger openings in the higher parts, hence causing the draft to be fast above the head and slow in lower parts. This provides a significant amount of air moving in the room without causing it be uncomfortable. The wood itself absorbs the humidity from the air.

The projection of the Mashrabiya achieves several purposes, on one hand it allows air from three sides to enter, even if the draught outside was parallel to the house façade; on the other hand it serves the street and in turn the neighborhood. A row of projected Mashrabiyas provides shelter for those in the streets from rain or sun. The shade in normally narrow streets will cool the air in the street and increase the pressure as opposed to the air in the sahn, which is open to the sun making it more likely that it would flow towards the sahn through the rooms of the house. The Mashrabiya also provides protection and shade for the ground floor windows that are flat and usually unprotected.

One of the major architectural benefits is correcting the footprint shape of the land. Due to winding and irregular streets, plots of land are also commonly irregular in shape while the house designs are usually regular (squares and rectangles). This would cause irregular shapes of some rooms and creates dead corners. The projection allows correcting the shapes of the rooms on the upper floors, hence allowing to utilise the entire plot. This also increased the usable space without increasing the plot size.

On the street side, in addition to their ornamental advantage, they served to provide enclosure to the street and a stronger human scale. 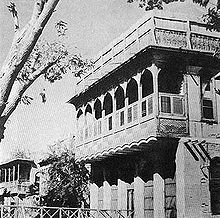 Shanasheel of the old part of Basra city, 1954