For the magazine, see Muqarnas. 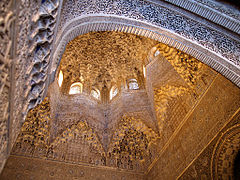 Muqarnas (Arabic: مقرنص Persian: مقرنس) is a type of corbel used as a decorative device in traditional Islamic architecture. The term is similar to mocárabe, but mocárabe only refers to designs with formations resembling stalactites, by the use of elements known as alveole.[1][2]

Muqarnas takes the form of small pointed niches, stacked in tiers projecting beyond those below and can be constructed in brick, stone, stucco or wood. They may then be decorated with painted tiles, or paint on wood or plaster. They are often applied to domes, pendentives, cornices, squinches and the undersides of arches and vaults.[1]

Muqarnas is the Arabic word for stalactite vault, an architectural ornament developed around the middle of the 10th century in northeastern Iran and almost simultaneously, but apparently independently, in central North Africa. It involves three-dimensional architectural decorations composed of niche-like elements arranged in tiers. The two-dimensional projection of muqarnas vaults consists of a small variety of simple geometrical elements.

The earliest example of muqarnas in Iraq can be found near Samarra, at Sharaf al-Dawla Mausoleum, also known as Imam Dur Mausoleum, the Uqaylid ruler.[3]

Examples can be found in the Alhambra in Granada, Spain, the Abbasid Palace in Baghdad, and the mausoleum of Sultan Qaitbay, Cairo, Egypt.[1] Muslim craftsmen created large rectangular roofs with muqarnas-style decoration for the 12th century Cappella Palatina in Palermo, Sicily, and other important buildings in Norman Sicily.

Muqarnas display radial symmetry based upon N-gonal symmetry.[citation needed] The number of unique tiles possible is derived from N = N/2 - 1. N must be a rather small number to avoid impractically thin muquarnas tiles. There are an unlimited number of muqarnas tile sets, because of the wide variety of tile profile design possibilities. Computer graphics today allow the design of novel muqarnas compositions not found in the historical record.