David Copperfield (born David Seth Kotkin; September 16, 1956) is an Emmy Award-winning American illusionist, and was described by Forbes as the most commercially successful magician in history.[1] Copperfield's network specials have been nominated for 38 Emmy Awards and won a total of 21 Emmys. Best known for his combination of storytelling and illusion, Copperfield’s career of over 30 years has earned him 11 Guinness World Records,[2] a star on the Hollywood Walk of Fame,[3] a knighthood by the French government, and he was named a Living Legend by the US Library of Congress.[4] Notable illusions created and performed by David Copperfield include vanishing the Statue of Liberty, walking through the Great Wall of China, escaping from a locked safe inside an imploding building, and flying through the air night after night in his Broadway show. Copperfield has so far sold 40 million tickets and grossed over $3 billion, which is more than any other solo entertainer in history, including Madonna, Michael Jackson and Lady Gaga.[2][5][1] He currently performs over 500 shows a year. When not performing, Copperfield creates experiences for his chain of 11 islands in the Bahamas - Musha Cay and the Islands of Copperfield Bay, which has just completed a $35 million renovation under Copperfield's supervision.[5][6]

Copperfield was born David Seth Kotkin in Metuchen, New Jersey,[7][8] the son of Jewish parents, Rebecca, an insurance adjuster, and Hyman Kotkin, who owned and operated a men's haberdashery in Metuchen called Korby's.[7] Copperfield's mother was born in Jerusalem, Israel, while his paternal grandparents were Jewish immigrants from Russia (present-day Ukraine).[9][10]

When Copperfield was 10, he began practicing magic as "Davino the Boy Magician" in his neighborhood,[11] and at the age of 12, became the youngest person ever admitted to the Society of American Magicians.[12][13][14] Shy and a loner, the young Copperfield saw magic as a way of fitting in and, later, as a way to get girls.[15] As a teenager, Copperfield became fascinated with Broadway and frequently sneaked into shows, especially musicals featuring Stephen Sondheim or Bob Fosse.[16] By age 16, he was teaching a course in magic at New York University.[17]

At age 18, he enrolled at Fordham University, and was cast in the lead role of the Chicago-based musical The Magic Man (written by Barbara D'Amato[18] and directed by Holland, MI's John Tamimi) three weeks into his freshman year,[19] adopting his new stage name "David Copperfield" from the Charles Dickens book of the same name. At age 19, he was headlining at the Pagoda Hotel in Honolulu, Hawaii.[13] 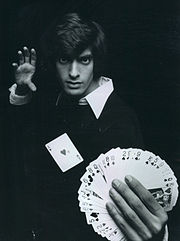 Copperfield performing for the 1977 ABC special.

Copperfield's career in television began in earnest when he was discovered by Joseph Cates, a producer of Broadway shows and television specials.[20] Cates produced a magic special in 1977 on ABC called "The Magic of ABC" hosted by Copperfield,[14] as well as several of "The Magic of David Copperfield" specials on CBS between 1978 and 1998.[20] There have been 20 Copperfield TV specials between 1977 and 2001.

Copperfield played the character of "Ken the Magician" in the 1980 horror film Terror Train. He also made an uncredited appearance in the 1994 film Prêt-à-Porter. Most of his media appearances have been through television specials and guest spots on television programs. His illusions have included making the Statue of Liberty disappear, flying, levitating over the Grand Canyon, and walking through the Great Wall of China.

In 1996, Copperfield joined forces with Dean Koontz, Joyce Carol Oates, Ray Bradbury and others for David Copperfield’s Tales of the Impossible, an anthology of original fiction set in the world of magic and illusion. A second volume was later published in 1997, called David Copperfield's Beyond Imagination. In addition to the 2 books, David also wrote an essay as part of the "This I Believe" series from NPR and the This I Believe, Inc.[21] Also during 1996, in collaboration with Francis Ford Coppola, David Ives, and Eiko Ishioka, Copperfield's Broadway show "Dreams & Nightmares" broke box office records.[22]

On 7 May 2009, Copperfield was dropped by Michael Jackson from Jackson's residency at the O2 Arena after an alleged row over money. Copperfield wanted $1 million (£666,000) per show.[24] Copperfield denied the reports of a row, saying "don't believe everything you read."[25] News of Copperfield's collaboration with Jackson first surfaced on April 1, 2009, and has since been reported by several websites as a possible April Fool's prank.[26] [27]

International Museum and Library of the Conjuring Arts

Copperfield owns the International Museum and Library of the Conjuring Arts, which houses the world's largest[30] collection of historically significant magic memorabilia, books, and artifacts. Begun in 1991 when Copperfield purchased the Mullholland Library of Conjuring and the Allied Arts, which contained the world's largest collection of Houdini memorabilia,[1] the museum comprises approximately 80,000 items of magic memorabilia, including Houdini's Water Torture Cabinet and his Metamorphosis Trunk, Orson Welles' Buzz Saw Illusion and automata created by Robert-Houdin.[30][31]

The museum is not open to the public; tours are reserved for "colleagues, fellow magicians, and serious collectors".[30] Located in a warehouse at Copperfield's headquarters in Las Vegas, the museum is entered via a secret door in what was described by actor Hugh Jackman as a "sex shop"[32] and by Forbes as a "mail-order lingerie warehouse".[1] "'It doesn't need to be secret, it needs to be respected,' he said. 'If a scholar or journalist needs a piece of magic history, it's there.'"[33]

Musha Cay and the Islands of Copperfield Bay

David Copperfield's Magic Underground was planned to be a restaurant based on Copperfield's magic.[38] There was a sign on Hollywood Boulevard during the late 90s indicating the restaurant was coming soon. Signs were also located around Pleasure Island and signs outside Disney-MGM Studios.[39] A Magic Underground restaurant was also going to open in New York's Times Square.[38] Plans also included eventual expansion into Disneyland in Anaheim, California, as well as Paris and Tokyo.[40] The restaurants were to have magic props and other items on the walls of the restaurants while magicians would go around to tables doing sleight of hand tricks. There was also to be a larger stage for larger stunts.[41] The restaurant in Times Square was 85 percent completed,[40] but, amid disputes between the creative team and the financial team, and enormous cost overruns, finances dried up from the investors, so the project was cancelled, and Disney cancelled the lease.[42] Copperfield was not an investor in the project; the investors reportedly lost $34 million on the project, and subcontractors placed $15 million in liens.[40][43]

On March 11, 1984, while rehearsing an illusion called "Escape from Death" where he was shackled and handcuffed in a tank of water, Copperfield became tangled in the chains and started taking in water and banging into the sides of the tank.[23] He was pulled from the water after 1 minute 20 seconds, hyperventilating and in shock, and taken to a Burbank hospital, and found to have pulled tendons in arms and legs. He was in a wheelchair for a week and used a cane for a period thereafter.[44]

Doing a rope trick, Copperfield accidentally cut off the tip of his finger with sharp scissors.[45] He was rushed to hospital and the fingertip was re-attached.[46]

On December 17, 2008, during a live performance in Las Vegas, one of Copperfield's assistants was sucked into the spinning blades of a 12 feet (3.7 m) high industrial fan that Copperfield walks through.[47] The assistant sustained multiple fractures to his arm, lacerations that required stitching, and severe bleeding.[47] Copperfield canceled the rest of the performance and offered the audience members refunds.

On July 11, 1994, Copperfield sued magician and author Herbert L. Becker in order to prevent publication of Becker's book which reveals how magicians perform their illusions.[48] Becker won the law suit.[49] However, the book was published without exposing any of Copperfield's secrets.[50] Because of a secrecy agreement Becker had signed with Copperfield, and an independent finding that Becker's description of Copperfield's methods was inaccurate, the publisher removed the section on Copperfield from the book before publication.[50] In 1997, Becker sued Copperfield and Lifetime Books for US$50 million for causing breach of contract between himself and Lifetime Books, the publisher of his book All the Secrets of Magic Revealed. Becker won this lawsuit when Copperfield settled at the eleventh hour and the publisher lost during the court battle.[51]

In 1997, Copperfield and Claudia Schiffer sued Paris Match for US$30 million after the magazine claimed their relationship was a stunt,[52] that Schiffer was paid for pretending to be Copperfield's fiancée and that she didn't even like him.[53][54] In 1999, they won an undisclosed sum and a retraction from Paris Match.[55]Herbert L. Becker who Copperfield asked to give testimony regarding the validity of the relationship gave convincing testimony that the relationship was real. Copperfield's publicist confirmed that while Schiffer had a contract to appear in the audience at Copperfield's show in Berlin where they met, she was not under contract to be his "consort".[56]

On August 25, 2000, Copperfield unsuccessfully sued Fireman's Fund Insurance Company for reimbursement of a $506,343 ransom paid to individuals in Russia who had commandeered the entertainer's equipment there.[57][58][59]

In 2004, John Melk, co-founder of Blockbuster Inc., and previous owner of Musha Cay, sued Copperfield for fraud after Copperfield's purchase of the island chain, alleging that Copperfield had deliberately obscured his identity during the purchase and that he would not have sold the island to Copperfield.[60] Copperfield claimed that Melk had agreed to sell the property to Copperfield's Imagine Nation Company, and that Copperfield negotiated the deal through a third party because he feared Melk was "seeking to exploit" Copperfield's celebrity status by demanding an unrealistic price.[61] The case was settled in 2006. The terms of the settlement are undisclosed.[60]

On November 6, 2007, Viva Art International Ltd and Maz Concerts Inc. sued Copperfield for nearly $2.2 million for breach of contract[62][63] and the Indonesian promoter of David Copperfield's canceled shows in Jakarta held on to $550,000 worth of Copperfield's equipment in lieu of money paid to Copperfield that had not been returned.[64] Copperfield countersued.[65] The dispute was resolved in July 2009.[66]

Copperfield was accused of sexual assault in 2007 by Lacey L. Carroll.[67] A federal grand jury in Seattle closed the investigation in January 2010 without bringing charges against Copperfield.[68][69] In January 2010 the Bellevue City Prosecutor's Office brought misdemeanor charges against Carroll for prostitution and allegedly making a false accusation of rape in another case.[70] Carroll filed a civil lawsuit against Copperfield,[71] which was dropped in April 2010.[72][73][74]

Copperfield was engaged to supermodel Claudia Schiffer for six years, but the couple separated in 1999 citing work schedules.[75]

In April 2006, Copperfield and two female assistants were robbed at gunpoint after a performance in West Palm Beach, Florida.[76] His assistants gave the robbers their money, passports, and a cell phone. According to his police statement, Copperfield did not hand over anything, claiming that he used sleight of hand to hide his possessions.[77] One of Copperfield's assistants wrote down most of the license plate number, and the suspects were later arrested, tried, and sentenced.[78]

Forbes magazine reported that Copperfield earned $55 million in 2003, making him the tenth highest paid celebrity in the world (earnings figures are pre-tax and before deductions for agents' and attorneys' fees, etc.).[80] He earned $57 million in 2004 and 2005, and $30 million in 2009 in entertainment earnings, according to Forbes.[81][82] Copperfield performs over 500 shows per year throughout the world.[83]

In 1982, Copperfield founded Project Magic,[84] a rehabilitation program to help disabled patients regain lost or damaged dexterity skills by using sleight-of-hand magic as a method of physical therapy.[84] The program has been accredited by the American Occupational Therapy Association, and is in use in over 1100 hospitals throughout 30 countries worldwide. Copperfield made an appearance on Oprah Radio in April 2008 to talk with Oprah Radio host Dr. Mehmet Oz about how the use of magic can help disabled people.[85] 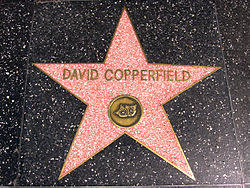 David Copperfield's star on the Hollywood Walk of Fame. 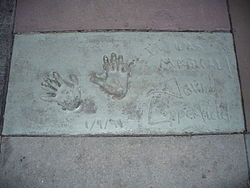 2. Most tickets sold worldwide by a solo entertainer

3. Highest career earnings as a magician

4. Highest Broadway gross in a week

5. Largest Broadway attendance in a week

7. Most magic shows performed in a year

9. Largest work archive for a magician

10. Highest annual earnings for a magician