These AP Courses are offered to students:[4] 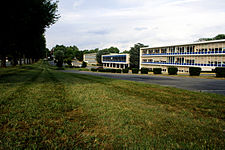 Honors classes are also offered in a variety of academic areas. These courses are offered at the honors level:[7]

Since the mid-1980s, the school's primary athletic rival has been Paul VI Catholic High School, located in Fairfax. Rivalries have sometimes resulted in high tensions between the schools.[citation needed]
In late 2009, tempers flared so high[when?] that police action had to be taken to cool the rivalry.
DeMatha Catholic High School, located in Hyattsville, Maryland, is another rival, particularly in boys basketball.

These are some statistics from the last five years of O'Connell Varsity Boys Basketball:[8]

The O'Connell Girls Varsity Soccer team held the record for being undefeated from (12) to (12).[citation needed] They were National Champions in 2004.[9]

The boys soccer team beat the 19-0-1 DeMatha Stags on October 31, 2006 in the conference quarter-finals. The victory prevented DeMatha, who at one point this season was ranked number 1 in the nation, from winning their 4th straight WCAC title. This resulted in the defeat of DeMatha's 67 game unbeaten streak. The team then lost to Paul VI 2-1 in the semi-final round of the WCAC tournament.[citation needed] 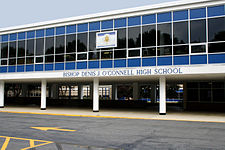 O'Connell has over 60 student-operated clubs. Their focuses are generally academic, charitable, and common interest. These clubs currently include: (listed alphabetically)[10]

The O'Connell Superdance is an annual 12 hour dance-a-thon held at the school which raises money for the Cystic Fibrosis Foundation. The Superdance is organized and run by students. It was started under the administration of principal Msgr. James McMurtrie. O’Connell students began holding the Superdance in 1976 because students wanted to speed the discovery of a cure for cystic fibrosis (CF), a fatal disease of the lungs which had claimed the life of sophomore Brenda O’Donnell on April 14, 1975. Her sister Maura was a senior in 1976 and also had cystic fibrosis. Their brother, Sean, died of cystic fibrosis that same year.

Maura graduated and went on to nursing school at Marymount University, continuing to support the Superdance in hopes that a cure would be found. Her last Superdance was in 1978 when she came out of the hospital just for the event. In a speech delivered to the O’Connell community she said:

“All of you I know have dreams – dreams of college, of success, of love and happiness – dreams of the future. We with cystic fibrosis have dreams too. Your wonderful all-out efforts and work for this dance-a-thon may help make some of our dreams come true.”

Two months later, she too died of this disease.[citation needed]

Over the past thirty years, O'Connell students have raised over $3,000,000 for the Cystic Fibrosis Foundation, an organization dedicated to finding a cure for the disease. Bishop Denis J. O'Connell's Superdance is the largest high school fundraiser for the Cystic Fibrosis Foundation in the nation, and one of the largest high school fundraising events in the country.[citation needed]

The Chunky Soup Drive is held annually throughout the month of October. Students have a month to collect as many cans of Chunky Soup as possible. At the end of the month, cans are collected and donated to Christ House homeless shelter in Alexandria, Virginia. According to the school, this event yields over 8,000 cans of soup each year.[15] This year students collected the highest number of cans ever: over 12,800.[citation needed]

The morning of May 7, 2002, on D.C. metro area shock jock Elliot Segal's radio program, DC101's Elliot in the Morning was conducting a contest. The winners of this contest would be cage dancers at an upcoming Kid Rock concert at George Mason University's Patriot Center. Wanting to be contestants, two sixteen-year-old O'Connell students, claiming to be eighteen, called the show. Instead of discussing the contest, the students discussed alleged sexual activity at O'Connell. [18] The students, who had used false names on air, were suspended the same day for their comments.[19] The principal addressed the student body over the PA system and criticized the content of that morning's show. The following day (May 8), Mr. Segal, angered by the students' suspension, personally insulted the principal on air, making lewd insinuations about his family. He also mocked the school's mission statement.[20] The two days of broadcasting were ruled indecent by the Federal Communications Commission (FCC). As a result, in October 2003, sixteen months after the incident, DC101's parent company Clear Channel Communications was fined $55,000. [21]