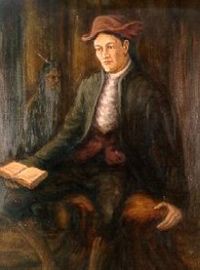 David Brainerd (April 20, 1718–October 9, 1747) was an American missionary to the Native Americans who had a particularly fruitful ministry among the Delaware Indians of New Jersey. During his short life he was beset by many difficulties. As a result, his biography has become a source of inspiration and encouragement to many Christians, including missionaries such as William Carey and Jim Elliot, and Brainerd's cousin, the Second Great Awakening evangelist James Brainerd Taylor (1801–1829). 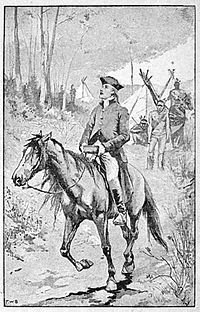 David Brainerd on horseback. He travelled over 3000 miles on horseback as a missionary.[1] 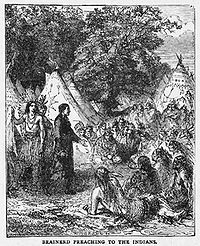 Brainerd preaching in the open-air to Native Americans.

David Brainerd was born on April 20, 1718 in Haddam, Connecticut, the son of Hezekiah, a Connecticut legislator, and Dorothy. He had nine siblings, one of whom was Dorothy's from a previous marriage. He was orphaned at the age of fourteen, as his father died in 1727 at the age of forty-six and his mother died five years later.[2]

After his mother's death, Brainerd moved to East Haddam to live with one of his older sisters, Jerusha. At the age of nineteen, he inherited a farm near Durham, but did not enjoy the experience of farming and so returned to East Haddam a year later to prepare to enter Yale. On 12 July 1739, he recorded having an experience of 'unspeakable glory' that prompted in him a 'hearty desire to exalt [God], to set him on the throne and to "seek first his Kingdom"'.[3] This has been interpreted by evangelical scholars as a conversion experience.[4]

Two months later, he enrolled at Yale. In his second year at Yale, he was sent home because he was suffering from a serious illness that caused him to spit blood. It is now believed that he was suffering from tuberculosis, the disease which would lead to his death seven years later. When he returned in November 1740, tensions were beginning to emerge at Yale between the faculty staff and the students as the staff considered the spiritual enthusiasm of the students, which had been prompted by visiting preachers such as George Whitefield, Gilbert Tennent, Ebenezer Pemberton and James Davenport, to be excessive. This led to the college trustees passing a decree in 1741 that 'if any student of this College shall directly or indirectly say, that the Rector, either of the Trustees or tutors are hypocrites, carnal or unconverted men, he shall for the first offense make a public confession in the hall, and for the second offense be expelled'. On the afternoon of the same day, the faculty had invited Jonathan Edwards to preach the commencement address, hoping that he would support their position, but instead he sided with the students. In the next term, Brainerd was expelled because he commented that one of his tutors, Chauncey Whittelsey, 'has no more grace than a chair' and that he wondered why the Rector 'did not drop down dead' for fining students perceived as over-zealous.[5] He later apologized for these comments.[6]

This episode grieved Brainerd, especially as a recent law forbade the appointment of ministers in Connecticut unless they had graduated from Harvard, Yale or a European institution, meaning that he had to reconsider his plans.[7] In 1742, Brainerd was licensed to preach by a group of evangelicals known as 'New Lights'. As a result, he gained the attention of Jonathan Dickinson, the leading Presbyterian in New Jersey, who unsuccessfully attempted to reinstate Brainerd at Yale. Instead, it was therefore suggested that Brainerd devote himself to missionary work among the Native Americans, supported by the Society in Scotland for Propagating Christian Knowledge. He was approved for this missionary work on 25 November 1742.[8]

On 1 April 1743, after a brief period serving a church on Long Island, Brainerd began working as a missionary to Native Americans, which he would continue until late 1746 when worsening illness prevented him from working. This illness, generally considered to be tuberculosis, had begun to affect him at Yale, but worsened when he entered the mission field. In his final years, he also suffered from a form of depression that was sometimes immobilising and which, on at least twenty-two occasions, led him to wish for death. He was also affected by difficulties faced by other missionaries of the period, such as loneliness and lack of food.[9]

His first missionary task was working at Kaunameek, a Housatonic Indian settlement near present day Nassau, New York, twenty or thirty miles from missionary John Sergeant who was working in Stockbridge, Massachusetts. Brainerd remained there for one year. During this period he started a school for Native American children and began a translation of the Psalms.[10]

Subsequently, he was reassigned to work among the Delaware Indians along the Delaware River northeast of Bethlehem, Pennsylvania, where he remained for another year, during which he was ordained by the Newark Presbytery.[10] After this, he moved to Crossweeksung in New Jersey, where he had his most fruitful ministry. Within a year, the Indian church at Crossweeksung had 130 members, who moved in 1746 to Cranbury where they established a Christian community.[11]

In these years, he refused several offers of leaving the mission field to become a church minister, including one from the church at East Hampton on Long Island. He remained determined, however, to continue the work among Native Americans despite the difficulties, writing in his diary:

'[I] could have no freedom in the thought of any other circumstances or business in life: All my desire was the conversion of the heathen, and all my hope was in God: God does not suffer me to please or comfort myself with hopes of seeing friends, returning to my dear acquaintance, and enjoying worldly comforts'.[12]

In November 1746, he became too ill to continue ministering, and so moved to Jonathan Dickinson's house in Elizabethtown. After a few months of rest, he travelled to Northampton, Massachusetts, where he stayed at the house of Jonathan Edwards. Apart from a trip to Boston in the summer of that year, he remained at Edwards's house until his death the following year.[11] In May 1747, he was diagnosed with incurable consumption; in these final months, he suffered greatly. In his diary entry for 24 September, Brainerd wrote:

'In the greatest distress that ever I endured having an uncommon kind of hiccough; which either strangled me or threw me into a straining to vomit'.[13]

During this time, he was nursed by Jerusha Edwards, Jonathan's seventeen-year-old daughter. The friendship that grew between them was of a kind that has led some to suggest they were romantically attached.[14] He died from tuberculosis on 9 October 1747, at the age of 29. He is buried at Bridge Street Cemetery in Northampton, next to Jerusha,[15] who died in February 1748 as a result of contracting tuberculosis from nursing Brainerd.[16] His gravestone reads:

Sacred to the memory of the Rev. David Brainerd. A faithful and laborious missionary to the Stockbridge, Delaware and Sasquehanna TRIBES OF INDIANS WHO died in this town. October 10, 1747 AE 32.[17]

Impact on the church and mission

He made a handful of converts, but became widely known in the 1800s due to books about him.[18] His Journal was published in two parts in 1746 by the Scottish Society for Promoting Christian Knowledge.

Much of Brainerd's influence on future generations can be attributed to the biography compiled by Jonathan Edwards and first published in 1749 under the title of An Account of the Life of the Late Reverend Mr. David Brainerd. Edwards believed that a biography about Brainerd would have great value and set aside the anti-Arminian treatise he was writing (later published as Freedom of the Will) in order to create one.[19] The result was an edited version of Brainerd's diary, with some passages documenting Brainerd's despair removed.[20] It gained immediate recognition, with eighteenth-century theologian John Wesley urging: 'Let every preacher read carefully over the Life of David Brainerd'.[21] The most reprinted of Edwards's books, it has never been out of print and has thus influenced subsequent generations, mainly because of Brainerd's single-minded perseverance in his work in the face of significant suffering. Clyde Kilby summarised Brainerd's influence as being based on the fact that, 'in our timidity and our shoddy opportunism we are always stirred when a man appears on the horizon willing to stake his all on a conviction'.[22] From the eighteenth century, missionaries also found inspiration and encouragement from the biography. Gideon Hawley wrote in the midst of struggles:

'I need, greatly need, something more than humane [human or natural] to support me. I read my Bible and Mr. Brainerd's Life, the only books I brought with me, and from them have a little support'.[23]

Other missionaries who have asserted the influence of Jonathan Edwards's biography of Brainerd on their lives include Henry Martyn, William Carey, Jim Elliot.[24] and Adoniram Judson.[20]

A new edition, with the Journal and Brainerd's letters embodied, was published by Sereno E. Dwight at New Haven in 1822; and in 1884 was published what is substantially another edition, The Memoirs of David Brainerd, edited by James M Sherwood. Brainerd's writings contain substantial meditation on the nature of the illness that eventually led to his death and its relation to his ties with God.

Brainerd's life also played a role in the establishment of Princeton College and Dartmouth College. The 'College of New Jersey' (later Princeton) was founded due to the dissatisfaction of the New York and New Jersey Presbyterian Synods with Yale; their expulsion of Brainerd and subsequent refusal to readmit them was an important factor in driving individuals such as Jonathan Dickinson and Aaron Burr to act on this dissatisfaction. Indeed, classes began in Dickinson's house in May 1747, while Brainerd was recovering there. Dartmouth College originated from a school founded by Eleazar Wheelock for Native Americans and colonists in 1748, and Wheelock had been inspired by Brainerd's example of Native American education.[25]

Despite Brainerd's expulsion from Yale, the University later named a building after him (Brainerd Hall at Yale Divinity School), the only building on the campus to be named after a student who was expelled. David Brainerd Christian School was also named after him.