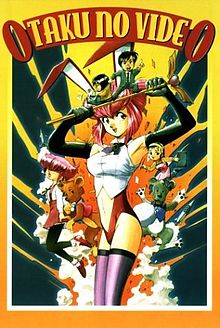 DVD cover of North American release of Otaku no Video.

Gainax Company, Limited (株式会社ガイナックス, Kabushiki-gaisha Gainakkusu?) is a Japanese anime studio famous for productions such as Gunbuster, The Wings of Honneamise, Nadia: The Secret of Blue Water, Neon Genesis Evangelion, FLCL and Tengen Toppa Gurren Lagann which have gone on to critical acclaim[1][2][3] and commercial success,[4] as well as for their association with award-winning anime director and studio co-founder Hideaki Anno. The company is headquartered in Koganei, Tokyo.[5]

Until Neon Genesis Evangelion, Gainax typically worked on stories created in-house, but the studio has increasingly developed anime adaptations of existing manga like Kareshi Kanojo no Jijou and Mahoromatic.

The studio was formed in the early 1980s as Daicon Film by university students Hideaki Anno, Yoshiyuki Sadamoto, Hiroyuki Yamaga, Takami Akai, Toshio Okada, Yasuhiro Takeda, and Shinji Higuchi. Their first project was to make an animated short for the 20th Annual Japan National SF Convention, also known as Daicon III, held in 1981 in Osaka, Japan. The short film is about a girl who fights all sorts of monsters, robots, and spaceships from earlier science fiction TV shows (including Ultraman, Gundam, Space Runaway Ideon, Space Battleship Yamato, Star Trek, Star Wars, Godzilla, and many others) until she finally reaches a desert plain and pours a glass of water on a dried-out daikon radish, which immediately resurrects itself and grows into a huge spaceship and beams her aboard. While this animated short was ambitious, its animation was rough and low-quality.

The group made a much bigger splash at the 22nd Annual Japan National SF Convention, Daicon IV, in 1983. The short they produced for this convention started with a recap of the original short, showing highlights of the girl's adventures with much better animation quality; then it showed the girl all grown up: wearing a bunny suit, fighting an even wider selection of creatures from all sorts of science fiction and fantasy movies and novels (appearances include various Mobile Suits from the Gundam series, Darth Vader, an Alien, a Macross Valkyrie, a Pern dragon, Aslan, a Klingon battle cruiser, Spider-Man, and a pan across a vast array of hundreds of other characters) as she surfs through the sky on the sword Stormbringer. The action was set to the song "Twilight" from the group Electric Light Orchestra. The use of this song, however, was unlicensed, preventing the short from being officially released on DVD, making the limited laserdisc release (Daicon Film) of the Daicon shorts very rare and highly sought after. The Daicon IV short firmly established Daicon Film as a talented new anime studio (albeit small and on a shoestring—it was founded in Musashino, Tokyo with only 20 million yen, ~US$200,000[6]). The studio changed its name to Gainax in 1985, basing the term "Gainax" on an obscure Tottori Prefecture[7] term for "giant" and the English suffix "x" (which sounded "good and was international").[8]

Since Gainax has originated as a group of fans, it has maintained ties to the general otaku community, allowing dōjinshi of its work, fan-made action figures,[9] and promoting series like Evangelion at private festivals and so on.

As a commercial entity, Gainax's first essay was Royal Space Force: The Wings of Honneamise, released in 1987. Honneamise was (and still is) critically acclaimed and a classic anime movie; however, it had a tepid commercial reaction. Gainax would attempt to develop a sequel later in March 1992 and abandon it for lack of funds. Gunbuster was the next release, in 1988. The OVA was a commercial success[10] and put Gainax on the stabler footing to produce works like Nadia and Otaku no Video.

During this period, Gainax produced a number of items besides anime series and movies—garage kits, adult video games (a major earner which kept Gainax afloat on occasion, and which were sometimes banned[11]), and other such items.

In 1995, Gainax produced perhaps their best known series, the commercially successful and critically acclaimed Neon Genesis Evangelion. In the wake of Evangelion's success, Gainax was accused of tax evasion and its president, Takeshi Sawamura, was sentenced to jail for accounting fraud.[12]

In 2004, Gainax marked their 20th anniversary with the production of Diebuster, the sequel to Gunbuster. Gainax's most recent successes on television are the popular anime series Tengen Toppa Gurren Lagann (2007), and Panty and Stocking with Garterbelt (2010).

In August 2011, A.D. Vision sued Gainax over Gainax's refusal to accept an option payment for the perpetual live-action rights to Evangelion, including the planned live-action film; ADV charges that by refusing to accept payment, Gainax broke the contract and is asking for the rights and legal fees.[13] 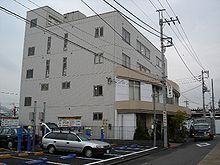 Gainax's offices in Koganei, Tokyo, circa 2004. The studio has since moved to a modest two-story premise, also in Koganei.

Gainax works include (year given is that of first broadcast, theatre showing, or publishing):

Gainax has also produced a number of computer games, including a strip mahjong game featuring Evangelion characters,[14] and its most famous games, the Princess Maker series, which was later adapted as Puchi Puri Yūshi.

Gainax has also teamed with other groups to create various works; they have worked on a 1987 promotional video for the song "Marionette" by Boøwy,[15] and collaborated with a Japanese fashion doll company to create Momoko-based "Gainax Girls" fashion dolls in 2006.[16]

As Daicon Films, Gainax was also notable for making a series of tokusatsu fan film shorts in the 1980s[citation needed], usually parodies of monster movies and superhero shows, which have gotten lots of favorable media coverage[citation needed]. These productions included: