'Influenza' A (H1N1) virus is a subtype of influenza A virus and was the most common cause of human influenza (flu) in 2009. Some strains of H1N1 are endemic in humans and cause a small fraction of all influenza-like illness and a small fraction of all seasonal influenza. H1N1 strains caused a few percent of all human flu infections in 2004–2005.[1] Other strains of H1N1 are endemic in pigs (swine influenza) and in birds (avian influenza).

In June 2009, the World Health Organization declared the new strain of swine-origin H1N1 as a pandemic. This strain is often called swine flu by the public media. This novel virus spread worldwide and had caused about 17,000 deaths by the start of 2010. On August 10, 2010, the World Health Organization declared the H1N1 influenza pandemic over, saying worldwide flu activity had returned to typical seasonal patterns.[2]

As of 26 April 2011, an H1N1 pandemic preparedness alert has been issued by the World Health Organisation (WHO) for the Americas. See Recombinomics- H1N1 WHO Alert 2011. The affected areas have included the Chihuahua region of Mexico where its severity and work load have been high. It is reported by the aforementioned Recombinomics source that the current vaccine (California/7/2009) for H1N1 influenza might be losing its effectiveness in 2011. This point is all the more significant since it is the current virus target for the northern hemisphere's flu vaccine, and is the intended choice for the southern hemisphere.

Swine influenza virus is common throughout pig populations worldwide. Transmission of the virus from pigs to humans is not common and does not always lead to human influenza, often resulting only in the production of antibodies in the blood. If transmission does cause human influenza, it is called zoonotic swine flu. People with regular exposure to pigs are at increased risk of swine flu infection. The meat of an infected animal poses no risk of infection when properly cooked.

Pigs experimentally infected with the strain of swine flu that is causing the current human pandemic showed clinical signs of flu within four days, and the virus spread to other uninfected pigs housed with the infected ones.[3]

During the mid-20th century, identification of influenza subtypes became possible, allowing accurate diagnosis of transmission to humans. Since then, only 50 such transmissions have been confirmed. These strains of swine flu rarely pass from human to human. Symptoms of zoonotic swine flu in humans are similar to those of influenza and of influenza-like illness in general, namely chills, fever, sore throat, muscle pains, severe headache, coughing, weakness and general discomfort. The recommended time of isolation is about five days.

The Spanish flu, also known as la grippe, La Gripe Española, or La Pesadilla, was an unusually severe and deadly strain of avian influenza, a viral infectious disease, that killed some 50 to 100 million people worldwide over about a year in 1918 and 1919. It is thought to be one of the most deadly pandemics in human history.

The 1918 flu caused an unusual number of deaths, possibly due to it causing a cytokine storm in the body.[4][5] (The current H5N1 bird flu, also an Influenza A virus, has a similar effect.)[6] The Spanish flu virus infected lung cells, leading to overstimulation of the immune system via release of cytokines into the lung tissue. This leads to extensive leukocyte migration towards the lungs, causing destruction of lung tissue and secretion of liquid into the organ. This makes it difficult for the patient to breathe. In contrast to other pandemics, which mostly kill the old and the very young, the 1918 pandemic killed unusual numbers of young adults, which may have been due to their healthy immune systems mounting a too-strong and damaging response to the infection.[7]

The term "Spanish" flu was coined because Spain was at the time the only European country where the press were printing reports of the outbreak, which had killed thousands in the armies fighting World War I. Other countries suppressed the news in order to protect morale.[8]

In 1976, a novel swine influenza A (H1N1) caused severe respiratory illness in 13 soldiers with 1 death at Fort Dix, New Jersey. The virus was detected only from January 19 to February 9 and did not spread beyond Fort Dix.[9] Retrospective serologic testing subsequently demonstrated that up to 230 soldiers had been infected with the novel virus, which was a H1N1 strain. The cause of the outbreak is still unknown and no exposure to pigs was identified. [10] 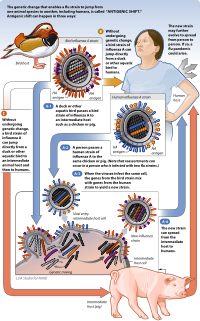 Preliminary genetic characterization found that the hemagglutinin (HA) gene was similar to that of swine flu viruses present in U.S. pigs since 1999, but the neuraminidase (NA) and matrix protein (M) genes resembled versions present in European swine flu isolates. The six genes from American swine flu are themselves mixtures of swine flu, bird flu, and human flu viruses.[16] While viruses with this genetic makeup had not previously been found to be circulating in humans or pigs, there is no formal national surveillance system to determine what viruses are circulating in pigs in the U.S.[17]

In April 2009, an outbreak of Influenza-like illness occurred in Mexico and the USA; the CDC reported seven cases of novel A/H1N1 influenza. By April 24 it became clear that the outbreak of ILI in Mexico and the confirmed cases of novel influenza A in the southwest US were related and WHO issued a health advisory on the outbreak of "influenza like illness in the United States and Mexico". [18] The disease then spread very rapidly, with the number of confirmed cases rising to 2,099 by May 7, despite aggressive measures taken by the Mexican government to curb the spread of the disease.[19]

On October 25, 2009 U.S. President Barack Obama officially declared H1N1 a national emergency[21] Despite President Obama's concern, a Fairleigh Dickinson University PublicMind poll found in October 2009 that an overwhelming majority of New Jerseyans (74%) were not very worried or not at all worried about contracting the H1N1 flu virus.[22]

A study conducted in coordination with the University of Michigan Health Service is scheduled for publication in the December 2009 American Journal of Roentgenology warning that H1N1 flu can cause pulmonary embolism, surmised as a leading cause of death in this current pandemic. The study authors suggest physician evaluation via contrast enhanced CT scans for the presence of pulmonary emboli when caring for patients diagnosed with respiratory complications from a "severe" case of the H1N1 flu.[23]

March 21, 2010 worldwide update by the U.N.'s World Health Organization (WHO) states that "213 countries and overseas territories/communities have reported laboratory confirmed cases of pandemic influenza H1N1 2009, including at least 16,931 deaths." [24]

As of May 30, 2010 worldwide update by World Health Organization(WHO) more than 214 countries and overseas territories or communities have reported laboratory confirmed cases of pandemic influenza H1N1 2009, including over 18,138 deaths. [25]

The research team of Andrew Miller MD showed pregnant patients are at increased risk.[26] It has been suggested that pregnant women and certain populations such as native North Americans have a greater liklihood of developing a T helper type 2 response to H1N1 influenza which may be responsible for the systemic inflammatory response syndrome that causes pulmonary edema and death. [27]