Cornwall is a city in Eastern Ontario, Canada and the seat of the United Counties of Stormont, Dundas and Glengarry, Ontario. Cornwall is Ontario's easternmost city, located on the St. Lawrence River, in the Quebec City-Windsor Corridor and on Ontario Highway 401, and is the urban centre for surrounding communities, which include Long Sault and Ingleside to the west, Mohawk Territory of Akwesasne to the south, St. Andrew's and Avonmore to the north, and Glen Walter, Martintown, Williamstown, and Lancaster to the east.

Cornwall is located along the 45th parallel, approximately 100 kilometres (62 mi) southeast of Ottawa, the national capital, 120 kilometres (75 mi) southwest of Montreal, Quebec's largest city, and 400 kilometres (250 mi) northeast of Toronto, the provincial capital. It is named after the English county of Cornwall, which is represented in the city's flag and coat of arms—both of which boast the duchy standard.

Aboriginal peoples have lived in and around the area of present day Cornwall for millennia.

The first serious European settlement was established in 1784, by United Empire Loyalists, primarily from New York. Disbanded soldiers and their families began to settle at the site of Cornwall, then called New Johnstown.[1]

They were led by Lieutenant-Colonel Sir John Johnson and were soldiers from the First Battalion King's Royal Regiment of New York and a contingent of the 84th Royal Highland Emigrants. Following the success of rebellious colonists in the American Revolution, the United Empire Loyalists (as they were later called) migrated to Canada. The British government helped them settle there in reward for their loyalty and compensation for their losses in the United States.

They founded a settlement on the site formerly called Pointe Maligne by French colonists and renamed it New Johnstown. Later renamed Cornwall for the Duke of Cornwall, Prince George, in 1834 the town became one of the first incorporated municipalities in the British colony of Upper Canada.[2] The construction of the Cornwall Canal between 1834 and 1842 accelerated the community's development into an industrial centre.[1]

West of Cornwall, along the St. Lawrence River, were several smaller communities. Now known as the Lost Villages, the communities were permanently flooded in 1958 by the construction of the St. Lawrence Seaway. The massive Moses-Saunders hydroelectric dam at the western end of the city required a reservoir, and the villages were flooded when it was filled.

The 2001 census indicates that English is the first language of approximately 65% of the population, while 27% count French as their first native language. The remainder speak numerous mother tongues, including (among others) Mohawk, Greek, and Italian.Urdu, Hindi, Arabic, tamil

Cornwall is a port-of-entry into Canada (Canada Border Services abandoned the Cornwall Island post May 31, 2009, but resumed service on July 13, 2009, at temporary facilities on the city's southern edge). The city is connected to the United States at Roosevelttown, near the municipalities of Massena, New York and Malone, New York, via the Three Nations Crossing (Canada, Mohawk, and U.S.A.) which traverses the St. Lawrence River and Cornwall Island, located within the Ontario portion of Akwesasne, a mostly Mohawk reserve.

Cornwall was once home to a thriving cotton processing industry. Courtaulds Canada, Inc.’s rayon manufacturing mill operated until 1992; at one point it employed nearly 3,000 people. Domtar, a Quebec-based company, operated a paper mill in the city for nearly 100 years, ceasing operations on March 31, 2006. At its peak, Domtar employed nearly 1,500 employees. In addition, Canadian Industries Limited (C.I.L.), now Pioneer Chemicals, has operated a plant in Cornwall since 1935.[citation needed] The Cornwall, ON location has been converted into a major deriatives plant. 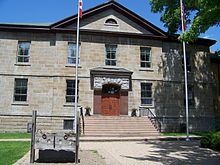 Cornwall's industrial base has now shifted to a more diversified mix of manufacturing, automotive, high tech, food processing, and call centres. The City hosts the largest SCM distribution centre in Canada, its massive 1,500,000-square-foot (140,000 m2) facility employing nearly 1000 people. StarTek and Teleperformance both operate call centres in Cornwall, each of which provides in excess of 300 jobs. In late 2008, Shopper's Drug Mart announced the construction of a 500,000 sq.ft. distribution facility in Cornwall's Business Park. Construction started on the new facility in the summer of 2009; over 130 new jobs will be created. Service Canada has established a new contact centre which opened in 2010. Over 170 new jobs were created. Cornwall's unemployment rate is about 4%.[4]

On April 16, 2009, Cornwall City Council agreed to increase property taxes by 2.5% per household based on property assessments calculated in 2008. 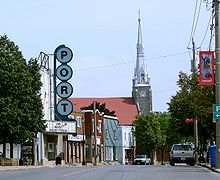 Cornwall is named after the county of Cornwall in the United Kingdom. Its flag also bears the insignia and colours of the flag of the Duchy of Cornwall.

The mayor of Cornwall is Bob Kilger. Cornwall is situated within the electoral district of Stormont—Dundas—South Glengarry, which is represented provincially by MPP Jim McDonell (Progressive Conservative Party of Ontario), and federally by MP Guy Lauzon (Conservative). John Sandfield Macdonald, the first Premier of Ontario, was from Cornwall, and is buried in St. Andrews West at the Catholic Church cemetery.

Cornwall Collegiate and Vocational School hosts grade 11 and 12 students and, having celebrated its bicentennial in 2006, is the oldest school in Canada.[citation needed] Al-rashid Islamic Institute is the first Islamic school of any kind in North America, providing higher educations Islamic studies with the boarding facility.

Census results from Statistics Canada[7] indicate that 1 in 4 adults (20 – 64 years) did not finish high school.

Cornwall does not enjoy a positive environmental reputation as a result of decades of industrial pollution in the City, the legacy of which is a riverfront contaminated by mercury, zinc, lead, and copper,[10] soil contaminated by coal tar and byproducts,[11] and most evidently, "Big Ben"[12]: a 45-acre (180,000 m2), 80 metre tall dumpsite within the city filled with wood bark, paper mill sludge, demolition waste and asbestos.

In September 2008, over public opposition and in spite of Ontario Ministry of Environment (MOE) reports indicating off site leachate impact from the dump and the likelihood of runoff to the St.Lawrence River, the MOE permitted additional dumping at the "Big Ben" site of creosote and bitumin contaminated soils from Domtar's former No-co-rode Ltd. site.

Although the area is touted as recreational it is off limits until winter when the waste is covered and the odours are subdued. It is then used as a ski hill.

For years, the industrial emissions in the Cornwall area, fuelled public health concern about respiratory disease and cancer. In 1995 Health Canada[13] reported the rate of hospitalization for asthma was approximately double that of cities such as Hamilton, Sudbury and Windsor. Further research, showed that infants under two years of age had four times the expected hospital admission rate for asthma. Lung and male rectal cancer rates were also elevated in comparison with the rest of the province.

The shutdown of the Courtaulds rayon fiber operation (1992) and the Domtar paper mill (2006) have been a significant factor in the city's improved air quality. Cornwall now consistently ranks in the top 10 of 40 monitored communities across Ontario. More recently, a Pembina Institute study of 29 communities across Ontario looked at a number of environmental, social and economic factors. Cornwall ranked 13th overall and its air quality was ranked #1 in the province.

Cornwall is one of only two cities left in the Province of Ontario with only primary sewage treatment facilities. Although tenders have been issued a construction date has not been determined, the governments of Canada and Ontario will each cover one-third of an estimated $55.5 million cost to expand the Cornwall facility to a secondary treatment level. The City will pick up the remaining one-third of the cost, at $18.5 million.

In 2006, the city updated its Strategic Plan including the objective, to develop an environmentally sustainable community.[citation needed]

In 2007, a former city councillor, Naresh Bhargava, began working with the St. Lawrence River Institute of Environmental Sciences on a project called the Community Carbon Reduction Initiative. City council provided $5,000 in start-up funding for the project.[citation needed] Earlier progress in energy conservation was made in the 1990s when a co-generation plant went into operation that provides 4% to 6% of the city's daily electrical needs while at the same time, heating a number of buildings including both hospital sites. Cornwall also converted all of its traffic signals in 2002 to energy efficient LEDs that have reduced power usage by more than 600,000 kW, enough to light close to 70 homes. The data was contained in a report prepared by the city's public works department.

The north span of the Three Nations Crossing, seen from Cornwall's east end.

With a fleet of 24 buses, Cornwall Transit serves the community 6 days per week (excluding holidays) on fixed routes and supplementary "rush hour" routes. In addition, there is an on-demand "Handi-Transit" service for the disabled. Cornwall Transit also contracts taxi service at a flat rate for Handi-Transit registrants who are ambulatory.

Cornwall Transit claims that about 738,000 passengers are transported per year (roughly 4,500 person trips, per day of operation).[15] The city lost provincially funded school bus contracts ($1 million per year) to private operators. This resulted in provincial subsidies of over $600,000 in 2006 to maintain operations.[citation needed]

Cornwall is served by the Cornwall Regional Airport located 10 km east of the City, near Summerstown. It is open year round and licensed for day and night VFR IFR operations. The facilities include a 3500' x 100' runway, a terminal, hangar, and Canada Border Services Agency service (on request). Domestic and international charter flying service from the airport is offered by Cornwall Aviation.

Cornwall is located on CN Rail's mainline Quebec City-Windsor corridor and served by 9 daily Via Rail runs between Toronto and Montreal. The Station is located in the City's north end.

The City of Cornwall is on the St. Lawrence Seaway just east of the Eisenhower and Snell Locks. The Cornwall Harbour and government wharf are located on the north bank of the St. Lawrence River in the city's east end.

Cornwall has been home to a variety of sports teams, the most notable of which was the Cornwall Royals hockey team which played in both the Quebec Major Junior Hockey League and the Ontario Hockey League before moving to Newmarket in 1992. The Royals won the Memorial Cup in 1972, 1980 and 1981.

Between the years 1993-1996, the Cornwall Aces, an AHL franchise was in town. They were the farm team for the NHL franchise the Quebec Nordiques/Colorado Avalanche.

The Cornwall Colts are the current Junior A team playing in the Central Canada Hockey League. They finished 6th in the 2007-08 season. Cornwall has hosted several major sporting events in its history, including the Ontario Winter Games and Special Olympics. In 2008, Cornwall hosted the Royal Bank Cup, the National Championship for Junior A hockey teams. The Cornwall Colts finished third in the series winning 2 of 5 games.

Cornwall has both competitive Men's and Women's Rugby Clubs. After many years without rugby in the community it saw a resurrection in 2006. Both teams compete in the Eastern Ontario Rugby Union, which is located in Ottawa. The home of the Cornwall Crusaders Rugby Football Club is Cornwall Collegiate and Vocational School. The Men's and Women's Teams practice Tuesdays and Thursdays from April until the end of August. The Men's team has found success in recent years winning the Eastern Ontario Men's Division 1 Championship in 2009 and 2010 versus The Napanee Outlaws and the Gatineau Mirage respectively.

The sport of rugby continues to grow in the community. Many high schools throughout Stormot, Dundas, and Glengarry have Junior and Senior Boys teams as well as Varsity Girls teams. These high school teams serve as feeders to the Cornwall Crusaders. Many players who play on the Crusaders today come from high schools in the S.D.& G. area.

Some of the more famous people to hail from the Cornwall area include:

Some stations from other nearby areas, including Ottawa, Montreal and New York's North Country, are also available.