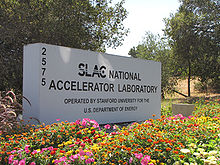 Founded in 1962 as the Stanford Linear Accelerator Center, the facility is located on 426 acres (1.72 square kilometers) of Stanford University-owned land on Sand Hill Road in Menlo Park, California—just west of the University's main campus. The main accelerator is 2 miles long—the longest linear accelerator in the world—and has been operational since 1966. 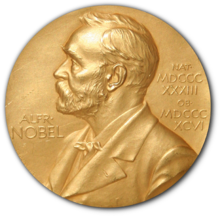 Research at SLAC has produced three Nobel Prizes in Physics:

SLAC's meeting facilities also provided a venue for the Homebrew Computer Club and other pioneers of the home computer revolution of the late 1970s and early 1980s.

In 1984 the laboratory was named a ASME National Historic Engineering Landmark and an IEEE Milestone.[7]

SLAC developed and, in December 1991, began hosting the first WWW server outside of Europe.[8]

In the early-to-mid 1990s, the Stanford Linear Collider (SLC) investigated the properties of the Z boson using the Stanford Large Detector.

As of 2005, SLAC employs over 1,000 people, some 150 of which are physicists with doctorate degrees, and serves over 3,000 visiting researchers yearly, operating particle accelerators for high-energy physics and the Stanford Synchrotron Radiation Laboratory (SSRL) for synchrotron light radiation research,[3] which was "indispensable" in the research leading to the 2006 Nobel Prize in Chemistry.[9]

In October 2008, the Department of Energy announced that the Center's name would be changed to SLAC National Accelerator Laboratory. The reasons given include a better representation of the new direction of the lab and the ability to trademark the laboratory's name. Stanford University had legally opposed the Department of Energy's attempt to trademark "Stanford Linear Accelerator Center".[1][10]

The Stanford Linear Collider was a linear accelerator that collided electrons and positrons at SLAC. The center of mass energy was about 90 GeV, equal to the mass of the Z boson, which the accelerator was designed to study. Grad student Barrett D. Milliken discovered the first Z event on 12 April 1989 while poring over the previous day's computer data from the Mark II detector.[13] The bulk of the data was collected by the Stanford Large Detector, which came online in 1991. Although largely overshadowed by the Large Electron-Positron Collider at CERN, which began running in 1989, the highly polarized electron beam at SLC (close to 80%) made certain unique measurements possible.

Presently no beam enters the south and north arcs in the machine, which leads to the Final Focus, therefore this section is mothballed to run beam into the PEP2 section from the beam switchyard.

Inside view of the SLD

The Stanford Large Detector (SLD) was the main detector for the Stanford Linear Collider. It was designed primarily to detect Z bosons produced by the accelerator's electron-positron collisions. The SLD operated from 1992 to 1998.

From 1999 to 2008, the main purpose of the linear accelerator was to inject electrons and positrons into the PEP-II accelerator, an electron-positron collider with a pair of storage rings 1.4 miles (2.2 km) in circumference. PEP-II was host to the BaBar experiment, one of the so-called B-Factory experiments studying charge-parity symmetry.

The Stanford Synchrotron Radiation Lightsource (SSRL) is a synchrotron light user facility located on the SLAC campus. Originally built for particle physics, it was used in experiments where the J/ψ meson was discovered. It is now used exclusively for materials science and biology experiments which take advantage of the high-intensity synchrotron radiation emitted by the stored electron beam to study the structure of molecules. In the early 1990s, an independent electron injector was built for this storage ring, allowing it to operate independently of the main linear accelerator.

SLAC plays host to part of the GLAST project, a collaborative international project also known as Fermi Gamma-ray Space Telescope, the principle objectives of which are:

The Kavli Institute for Particle Astrophysics and Cosmology (KIPAC) is partially housed on the grounds of SLAC, in addition to its presence on the main Stanford campus.

The Linac Coherent Light Source (LCLS) is a free electron laser facility located at SLAC. The LCLS is partially a reconstruction of the last 1/3 of the original linear accelerator at SLAC, and can deliver extremely intense x-ray radiation for research in a number of areas. It achieved first lasing in April 2009.[14]

Aerial photo of the Stanford Linear Accelerator Center, with detector complex at the right (east) side

The laser uses hard X-rays, 1×10^9 the relative brightness of traditional synchotron X-rays, in order to take "snapshots" of objects on the nearly atomic level before obliterating samples. The laser's wavelength is similar in width to an atom, providing extremely detailed images on a scale previously unattainable. Additionally, the laser is capable of capturing images with a "shutter speed" measured in femtoseconds, or trillionths of a second, necessary because the intensity of the beam is such that it nearly instantly destroys its subject.[15]