Osgood–Schlatter disease and or syndrome (also known as tibial tubercle apophyseal traction injury) is an irritation of the patellar tendon at the tibial tuberosity.[1]

The condition occurs in active boys and girls aged 9–16[2] coinciding with periods of growth spurts. It occurs more frequently in boys than in girls, with reports of a male-to-female ratio ranging from 3:1 to as high as 7:1. It has been suggested the difference is related to a greater participation by boys in sports and risk activities than by girls.[citation needed]

The condition is usually self-limiting and is caused by stress on the patellar tendon that attaches the quadriceps muscle at the front of the thigh to the tibial tuberosity. Following an adolescent growth spurt, repeated stress from contraction of the quadriceps is transmitted through the patellar tendon to the immature tibial tuberosity. This can cause multiple subacute avulsion fractures along with inflammation of the tendon, leading to excess bone growth in the tuberosity and producing a visible lump which can be very painful when hit.

The syndrome may develop without trauma or other apparent cause; however, some studies report up to 50% of patients relate a history of precipitating trauma.

In a retrospective study of adolescents, young athletes actively participating in sports showed a frequency of 21% reporting the syndrome compared with only 4.5% of age-matched nonathletic controls.[3] Intense knee pain is usually the presenting symptom that occurs during activities such as running, jumping, squatting, and especially ascending or descending stairs and during kneeling. The pain is worse with acute knee impact. The pain can be reproduced by extending the knee against resistance, stressing the quadriceps, or striking the knee. Pain is mild and intermittent initially. In the acute phase the pain is severe and continuous in nature. Impact of the affected area can be very painful. Bilateral symptoms are observed in 20–30% of patients.

The symptoms usually resolve with treatment but may recur for 12–24 months before complete resolution at skeletal maturity, when the tibial epiphysis fuses. In some cases the symptoms do not resolve until the patient is fully grown. In approximately 10% of patients the symptoms continue unabated into adulthood, despite all conservative measures.[4]

The condition is named after Robert Bayley Osgood and Carl B. Schlatter who described the condition independently in 1903. 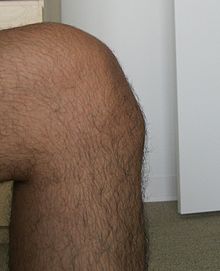 Diagnosis is made clinically,[5] and treatment is conservative with rest, RICE (Rest, Ice, Compression, and Elevation), and if required acetaminophen (paracetamol) or ibuprofen. The condition usually resolves in a few months, with a study of young athletes revealing a requirement of complete training cessation for 1 week (on average) and gradual resumption of full training by 1 months.[3]

Bracing or use of an orthopedic cast to enforce joint immobilization is rarely required and does not necessarily give quicker resolution. Sometimes, however, bracing may give comfort and help reduce pain as it reduces strain on the tibial tubercle.[6] Surgical excision may rarely be required in skeletally mature patients.[4]

After symptoms have resolved, a gradual progression to the desired activity level may begin. In addition, predisposing factors should be evaluated and addressed. Commonly quadriceps and/or hamstring tightness is present and should be addressed with stretching exercise.

After being clinically diagnosed the patient should rest for at least 3 days and must try not to use the knee as hard for about 1–2 weeks without any physical activities. If the disease continues to a certain extent where the patient cannot move the joint then they should seek medical advice straight away as although this is very rare it can be severely limiting for the patient's sporting future if it does occur.

The Strickland Protocol has shown a positive response in patients with a mean return to sport in less than 3 weeks. Further research into the anatomical and biomechanical responses of this protocol are currently being undertaken by the authors. The study was presented at the European College of Sports Science - 13th Congress Proceedings Estoril,Portugal, July 9–12, 2008.[7][8]

Paul Scholes is a sportsman who has recovered from this condition.[9] The French tennis player, Gaël Monfils, wears patella bands in an attempt to combat the condition. [10] Liverpool Captain Steven Gerrard also suffered from the condition in his youth.