Hydrocodone/paracetamol, like other opioid analgesics, is used to manage pain. It is most commonly prescribed for relief of moderate to moderately severe pain of acute, chronic, or post-operative types.

Hydrocodone/paracetamol is made as a mixture of hydrocodone and paracetamol. Paracetamol acts as an analgesic/antipyretic. Hydrocodone is a semi-synthetic opioid analgesic.

This drug is classified under pregnancy category C. Although not enough research has been done to deem this drug safe for pregnant women, if the positive effects outweigh the possible negatives, then it can be taken. If taken in the time before delivery, it may give rise to respiratory depression in the baby. Mothers using any opioids regularly during pregnancy run the risk of their babies being substance-dependent and, therefore, going through withdrawal symptoms after birth. Withdrawal symptoms include excessive crying, vomiting, irritability, tremors, and fever. Nursing mothers should not use this drug, as paracetamol is transferred through breast milk; it is unknown whether Hydrocodone is.[2] 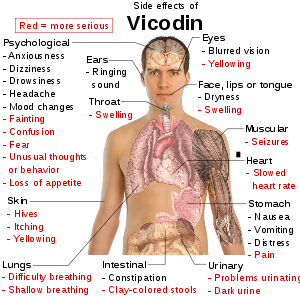 A diagram showing the side effects of Vicodin (hydrocodone/paracetamol)

Unlike NSAIDs, paracetamol does not cause ulcers. However, paracetamol can cause liver damage, and, thus, dosages should never exceed 4000 mg a day; this is especially important and will be a smaller number of doses when using mixed drugs like Vicodin. It is imperative that users of this drug follow physician-prescribed dosages. Liver damage can manifest, ranging from abdominal pain to outright liver failure, and can necessitate a liver transplant to avoid death.

Besides the activity of hydrocodone and acetaminophen on their own, there is observed a factor of analgesia related to the two substances in tandem[citation needed] that is not altogether understood, but this independent synergy has been observed to be related to the inhibition of prostaglandins. The pharmacodynamics of a mixed drug such as Vicodin depends on the kinetics of the drugs that comprise it.

Hydrocodone: Acts at μ-opioid receptors.[4] Hydrocodone is metabolized to hydromorphone by the activity of cytochrome P450 2D6. Cytochrome 3A4 forms the substrate norhydrocodone. Note that this conversion is only somewhat responsible for the effects of hydrocodone.[5] Hydrocodone passes through the blood-brain barrier (BBB) because of its modifications. The brain is typically where the analgesic effects are being carried out. Many of the side-effects of this drug are caused by the fact that it so readily crosses the blood-brain barrier. The half-life of hydrocodone is approximately 3.8 hrs.

Paracetamol: The major active metabolites are sulphates and glucuronide conjugates. Its main mode of action is to inhibit the activity of the enzyme cyclooxygenase (COX). COX enzymes are necessary for the production of prostaglandins. Prostaglandins are a form of hormone (although rarely classified as such) that are indicated to be mediators of pain, fever, and inflammation. The half-life of paracetamol may be measured either by salivary or by plasma counts. Both measurements give a varying half-life between 1 and 4 hours.[6] Peak levels are reached between 40–60 minutes after ingestion. It has been proposed that paracetamol aids in the reduction of pain by increasing serotonergic neurotransmissions.[7] Paracetamol is a peripherally acting drug, and hence does not cross the BBB as readily as hydrocodone.[citation needed]

The principal constituent of Vicodin, hydrocodone, has the same basic structure as morphine but is metabolized by different enzymes. There are three variations of Vicodin, with different amounts of hydrocodone in each. Hydrocodone, like oxycodone, is an intermediate-strength analgesic that has similar effects as morphine; hydrocodone is approximately twice as potent as morphine by mouth for acute use. The tablets are made with less hydrocodone than paracetamol. The theory of using the mix comes from the idea that these drugs alleviate pain using different mechanisms and also that the adverse side-effects of each separate drug are reduced by using reduced dosages of both drugs in order to get the same analgesic effect.[8]

In the United States, Vicodin production is regulated in part by the Controlled Substances Act of 1970. This guarantees that all manufacturing, importing, possession, and distribution of drugs are to be overseen and regulated by the federal government.

To qualify for treatment as a Schedule III medication in the United States, hydrocodone must be combined with a non-narcotic ingredient in a recognized therapeutic amount. There are four dosage forms recognized by the U.S. authorities:

On June 30, 2009, a U.S. Food and Drug Administration (FDA) advisory panel voted by a narrow margin to advise the FDA to remove Vicodin and another painkiller, Percocet, from the market because of "a high likelihood of overdose from prescription narcotics and acetaminophen products". The panel cited concerns of liver damage from their acetaminophen component, which is also the main ingredient in commonly-used nonprescription drugs such as Tylenol.[10] Each year, acetaminophen overdose is linked to about 400 deaths and 42,000 hospitalizations.[11]

Hydrocodone, the narcotic component of Vicodin, is still available in Canada as a single drug and marketed under the trade name Hycodan in syrup and tablet forms by Bristol-Myers-Squibb.[16]

The popular American television medical drama, House plot centers on the central character's habitual use (and abuse) of Vicodin to manage pain stemming from an infarction in his quadriceps muscle incurred some years earlier.

Vicodin is referenced in multiple songs by rapper Eminem such as "Kill You", "Under the Influence", "Deja Vu", "Old Time's Sake", "Underground", "Going Through Changes", "Oh No", and "Cocaine". He also featured a Vicodin pill on the CD of his debut album The Slim Shady LP. The rapper has admitted to an addiction to the painkiller (along with other substances), the hiatus in rapping that it caused, and the subsequent rehabilitation required to return to his career.[17]