American football, known locally as "gridiron", is a participation and spectator sport in Australia. The sport is governed by Gridiron Australia, a member of the International Federation of American Football (IFAF).

The sport has been played in six Australian states and territories across the country since World War II, but has only had regular league play since 1983. There is no uniform gridiron season in Australia. The various state and territory bodies play at different times of the year. There are currently 73 junior and senior teams playing gridiron in Australia. The national team has competed in the IFAF World Cup and other international competitions.

American football has an increasing media profile in Australia. The National Football League is broadcast on both free-to-air television through One HD and subscription television through the Fox Sports and ESPN channels available on Foxtel and Austar, including the Super Bowl live. Due to interest in converts from Australian rules football, particularly Ben Graham and Saverio Rocca, the game is also regularly covered by Sports Tonight as well as the Herald Sun and other newspapers.[2] 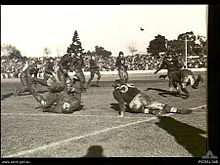 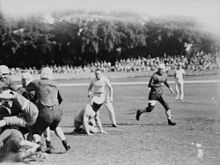 The first games of gridiron football in Australia occurred during World War II. Exhibition matches featuring American servicemen were played in the major cities and attracted interest and crowds.

A high profile match in Adelaide played on American Independence Day (4 July) 1942 by American servicemen attracted a crowd of 25,000.[3]

Several matches were played in Sydney in 1943 and another high profile match was played in Brisbane in 1944, all featuring American servicemen. Another match was held in Melbourne at an unknown date during the war.

Matches of Austus were also played against Australian rules footballers featuring a set of compromise rules.

However the game did not take hold in Australia after the war.

In 1983 the first fully organised gridiron teams in Australia were formed in Melbourne, Victoria.

Further north, an ad was placed over a Sydney radio station advertising for American football enthusiasts to assemble in early 1984. The response was remarkable and several teams comprising enthusiastic amateurs who had been throwing the ball around on Sunday afternoons were formed.

The first season saw all games being played at a disused rubbish tip. There were no goal posts,no medical supervision and no insurance. The early pioneers did not wear helmets but found kick boxing protective headgear useful.

1984 saw the first interstate clash when a team from Melbourne travelled to Sydney to play. NSW won the match 30-7. American Football had arrived in Australia.

Soon football equipment began to be imported into Australia. Coaches came from the University of Hawaii for clinics and to help train players. These efforts helped lay the foundation for the sport to develop in Australia so that other leagues could start up around the country.

Also in 1984 the Australian American Football Conference was founded (later renamed the Australian American Football League). It was a high profile team which the media and sponsors would see as a positive entity to promote the sport back home. The first Kookaburras embarked on an extensive tour to the USA, training at US Colleges. The LA Rams assisted in hosting the Kookaburras. The Kookaburras would tour the USA and Europe annually until 1992.

In 1985 the first organised competition was played in Queensland. The 1st year of competition of the Queensland Gridiron Football League was contested by four clubs, the Brisbane Bulldogs, the Mitchelton Warriors, the Pine Grove Steelers, and the Kenmore Centurions. Unable to gain access to the usual equipment of the game, the teams took the field in the 1st year in makeshift padding and uniforms (without helmets) while still utilising all the normal rules of the games. In the Championship game, SUNBOWL I, the Brisbane Bulldogs defeated the Mitchelton Warriors 5-2.

In 1990 the Down Under Bowl tournament commenced in Australia and is still going strong. Each year individual American States are invited to field High School all-star teams, travel to Australia and spread the growth of the game down under. Games are played against local Australian teams and between US teams. 1998 saw the most successful year yet with 36 teams travelling to the Gold Coast in Queensland to compete in the Down Under Bowl.

Trans Tasman competition came to Melbourne in January 1991 when Victoria played the visiting South Auckland Raiders from New Zealand, finishing in a 19-19 draw.

A series of interstate Bowl games were to be played between all major States in October/November 1991. The Victorians were rewarded with a good win. The following week saw the NSW state team go down to the Victorian Eagles at Olympic Park. This left Victoria as the National State Champions for 1991.

The National Gridiron League of Australia (NGLA) was formed in January 1991 "to govern and promote American football on the national level and to represent Australian gridiron on the international scene."

Gridiron Australia (GA) was formed in 1994, with the aim of replacing the old National Gridiron League of Australia. By 1995 American football was being played in every State and Territory in Australia, a total of approximately 100 teams.

In 1995 Darren Bennett became the third Australian to play in the NFL when he was selected as the punter for the San Diego Chargers. The first Australian to play in the NFL was Colin Ridgeway, who played Aussie Rules for Carlton in the 1960’s before being picked up by the Dallas Cowboys as a punter. After him came Colin Scotts, who went to college in Hawaii before being drafted to play with the Phoenix Cardinals and then the Houston Oilers in the middle to late 1980s.

In 1996, 24 US teams toured Australia and New Zealand as part of Down Under Bowl VIII. Both Victoria and South Australia recorded wins over US teams.

In 1997 the Australia Day Championships were held in Sydney, with Queensland taking the Championship.

In 1997 Australia resumed its international campaign, against New Zealand. On 1 August 1997 the Australian Bushrangers played the New Zealand Haka in Auckland, New Zealand. The game, the inaugural Anzac Bowl, was a great success.

On 7 January the Australian American Football League (AAFL) was formed.

On 31 January 1998 the Bushrangers played Team Hawaii in Honolulu during the National Football League's Pro Bowl week. Trips to Europe and Japan are also planned. Australia has participated in the Gridiron World Cup since 1999.

In May 1998 the AAFL was dissolved, with Gridiron Australia becoming the only National body involved in the management of Gridiron matters in Australia.

On August 7, 1999, the first American Bowl in Australia was played in Sydney[4] between the Denver Broncos and San Diego Chargers at Stadium Australia, the first American pro football game to be held in the Southern Hemisphere. The game attendance was announced at 73,811 spectators.[1]

In 2008, Ten HD announced it would televise the NFL season on free-to-air television, including the Super Bowl live.