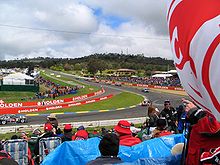 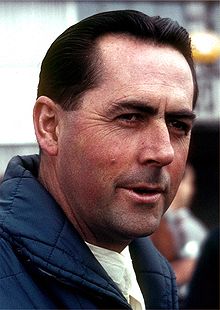 Jack Brabham is the most successful Australian driver in Formula One history. Brabham also set up his own team, the Brabham Racing Organisation, and won one of his world titles with them.

Motorsport is a popular spectator sport in Australia, although there are relatively few competitors compared to other sports due to the high costs of competing. The most widely watched motorsport is V8 Supercars, especially at the Bathurst 1000. Other classes in Australia include Formula 3 and Formula Ford (open wheel racing) and Superbikes

Since 1985, Australia has hosted a round of the Formula One World Championship. For the first 10 years, the Australian Grand Prix was held in Adelaide as the last round of the championship. Adelaide played host to several title deciders; for example, the 1986 title, where Alain Prost successfully defended his championship after Nigel Mansell's left rear tyre exploded; the 1994 title was also decided in questionable circumstances, after Michael Schumacher collided with his rival Damon Hill to win the title by a single point. Melbourne replaced Adelaide as host from 1996 onwards. Two Australians have won the World Driver's Championship: Jack Brabham, who won the title on three occasions; and Alan Jones, who won in 1980. Mark Webber is currently the only Australian Formula One driver.

Australia also hosted a round of the Champ Car World Series from 1991 to 2007. The Gold Coast Indy 300 has been held at the Surfers Paradise Street Circuit since 1991, with John Andretti winning the first event. Replacing the now defunct Champ Car series, the IndyCar Series will race in Australia for the first time in 2008, with Australian Will Power, a potential race winner, driving for KV Racing.

Australia has hosted a round of the World Rally Championship from 1988 to 2006, including the final round of the championship in 2004 and 2005. Chris Atkinson has been competing in the WRC since 2006, with some promising results.

Australia has been competing in the A1 Grand Prix championship since the series was established in 2005. Will Power is the most successful of the five drivers who have represented Team Australia to date. John Martin are Australia's current drivers. Australia also hosted a round of the championship at Eastern Creek Raceway early in A1GP history but has since ceased.

Casey Stoner was the 2007 MotoGP World Champion. A round of the world series has been in Australia since 1989 and is held at the Phillip Island Grand Prix Circuit in October. The circuit also hosts a round of the World Superbike Championship. Australia has produced many top motorcycle riders with Stoner, Wayne Gardner, Troy Bayliss and Troy Corser all having won world championships in various classes, with five time 500cc world champion Mick Doohan regarded as one of the all time greats.

Australia hosts a round of most major international series, including: