Taimour Abdulwahab al-Abdaly, an Iraqi-born Swedish citizen, is suspected of carrying out the bombing.[2][9] The Norwegian Broadcasting Corporation described the event as the first suicide attack linked to Islamic terrorism in the Nordic countries.[10][11]

On 8 March 2011 Strathclyde Police in Scotland arrested a 30-year old man in the Whiteinch area of Glasgow in connection with the Stockholm bombing. He was arrested under the Terrorism Act 2000, for "aiding terrorist activity" outwith Scotland, and held at Helen Street police station, the most secure police station in the country.

The first explosion occurred at 16:48 CET, when an Audi 80 Avant automobile exploded at the intersection of Olof Palmes Gata and Drottninggatan.[3] According to the fire services the car contained bottles with liquefied petroleum gas which resulted in several more explosions.[3] Two people at the site of the car explosion were taken to the hospital with minor injuries.[5]

The second bombing occurred at about 17:00 CET, at the intersection of Bryggargatan and Drottninggatan.[3] A man’s body, with blast injuries to his abdomen, was discovered nearby.[3] According to a police spokesman the man had blown himself up.[3] According to Aftonbladet, the man carried six pipe bombs but only one of them triggered, killing him.[4] Close to the man a metal pipe and a rucksack filled with metal fasteners and an unknown substance suspected to be an explosive were found.[12] Witnesses claim the bomber was "shouting something in Arabic" before detonating the bomb which killed him.[13]

CCTV footage of the second explosion was published on the next day by Aftonbladet.[14]

At the time of the explosions, central Stockholm was filled with Christmas shoppers and thousands of people were nearby.[3] Foreign Minister Bildt expressed his concern that had the attack been successful, the consequences could have been "truly catastrophic."[5]

The bombing follows a November increase in the terror alert level in Sweden from low to elevated because of a "shift in activities among Swedish-based groups" that could be plotting attacks.[6]

About ten minutes before the explosions, a threatening email was sent to the Swedish Security Service and the Swedish news agency Tidningarnas Telegrambyrå (TT).[3] The letter referred in particular to the presence of Swedish troops in Afghanistan and the Swedish artist Lars Vilks' drawings of the Islamic prophet Muhammad as a roundabout dog.[5] The letter furthermore said: "Now will your children, daughters and sisters die the same way our brothers and sisters die. Our actions will speak for themselves. As long as you don't end your war against Islam and degradation against the prophet and your foolish support for the pig [Lars] Vilks." The message ended with a call to "all Mujahedin in Europe and Sweden. Now is the time to strike, wait no longer. Go forward with whatever you have, even if it is a knife, and I know you have more than a knife. Fear no one, don't fear prison, don't fear death." Included were also sound files spoken in Swedish and Arabic.[3]

Map of the area where the explosions happened

A PMR radio with wires attached was found near the body,[15] suggesting that the bomb was supposed to be triggered remotely.[16] The state prosecutor said the action was well organised and that authorities presumed the man had help with preparations. The man was wearing a bomb belt and also carried a big bomb and held a metal object in his hands which most closely could be described as a pressure cooker.[17] The prosecutor also said that it is believed that the bomb exploded prematurely and speculated the suspect was on his way to the Stockholm central station or Åhlens, a large department store nearby.

The media reported that a woman "close to" the suspect was detained in a 4:00 raid of a Hässelby flat by the National Task Force.[18]

A search warrant was issued for a property in Bedfordshire the next day under the UK Terrorism Act 2000.[19] According to the Daily Mail, the suspect lived with his wife and two children in Luton, UK, and had only recently travelled to Sweden.[20]

On 13 December, SÄPO announced that seven explosives experts from the FBI will assist the investigation.[21] Security services told TV4 that the suicide bomber's car contained a second pressure cooker bomb.[22] Witnesses have come forward saying that the man tried to buy aluminium powder in his parents' home town of Tranås, four days before the bombing.[23]

Tidningarnas Telegrambyrå reported that a member of the Swedish Armed Forces warned an acquaintance to keep away from Drottninggatan several hours ahead of the bombings.[24] The message read, "If you can, avoid Drottninggatan today. A lot can happen there...just so you know."[25] The Swedish Armed Forces denied having any prior knowledge of the attack but promised to investigate the matter further.[26] The Security Service launched an independent investigation.[27] Later, the newspaper Expressen reported that several sources with insight in the investigation claimed a second government employee had information about the bombing ahead of time.[28]

Swedish terrorism expert Magnus Ranstorp from the Swedish National Defence College said he believed the perpetrator wasn't working alone.[29] A coughing sound heard on the audio message left by the perpetrator increased suspicions that the bomber had other accomplices.[30]

Investigations showed that the terrorist used at least three different passports to avoid raising any red flags when traveling to the middle east.[31]

Suspicions that Taimour Abdulwahab had an accomplice was strengthened in January 2011 when media reported that uncensored recordings of the terrorist's audio message was published on youtube the day after he died.[32] Shortly afterwards, Swedish TV4 reported that Abdulwahab's wife Mona Thwany uploaded the recordings to their Youtube account, "mona123timo".[33] 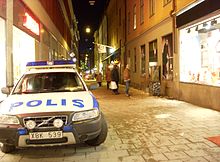 The primary suspect is Taimour Abdulwahab al-Abdaly (12 December 1981 – 11 December 2010).[1][9] Based on information from the suspect's profile on Facebook and the muslima.com dating site, where he was looking for a second wife, he was a 28-year-old Iraqi Swede, born in Baghdad, who grew up in Tranås and who was naturalized as a Swedish citizen in 1992.[34]

After graduating from secondary school in Sweden in 2001, he studied at the University of Bedfordshire in the UK, graduating with a degree in sports therapy in 2004.[35][36] The same year he married a Swedish citizen, named Mona Thwany or "Umm Amira", born in Bucharest to a Romanian Christian mother and Iraqi Muslim father,[37] with whom he had two daughters, born in 2007 and 2009, and a son born in 2010. He named his son Osama in honour of al-Qaeda leader Osama bin Laden.[38] At the time of the bombings, he was living in Luton, Bedfordshire, with his wife, who also holds fundamentalist Islamic views. Their children are reportedly still in Luton.[39] He travelled back to Sweden on 19 November to visit his relatives in Tranås.[40]

During his stay in Britain he resided in Luton[39] for almost a decade.[6] Reports indicated he had steadily become more religious as well as angry over the later 2000s. During Ramadan in 2007, he tried to recruit other Muslims who shared his political views at the Luton mosque when he was given a chance to preach, but stormed out of the mosque when confronted over his beliefs,[6] and was eventually kept away from the mosque.[41] His Facebook profile was reported as containing a mixture of technophile and Islamic fundamentalist attitudes, combining statements like "I love my Apple iPad" with references to "the Islamic Caliphate state" or Yawm al-Qiyamah.[9][39][42]

Prime Minister Fredrik Reinfeldt held a press conference on 12 December 2010 where he gave the following comment: "Saturday´s events in central Stockholm lead many people to ask whether Sweden has become less safe. What occurred is unwanted and unacceptable. We must safeguard the open society where people can live together side by side."[43] Minister for Foreign Affairs Carl Bildt posted a message on Twitter on 11 December 2010 that read: "Most worrying attempt at terrorist attack in crowded part of central Stockholm. Failed — but could have been truly catastrophic."[5] Swedish Security Service spokesman Mikael Gunnarsson said the agency had not taken any decision to increase the terror threat level after the bombings "and apart from the e-mail we didn't have any other indications or threats that this would happen."[5]

Hassan Moussa, the imam of Stockholm's grand mosque, condemned: "all forms of attacks, violence, fears and threats against innocent people, whatever the motive or pretext" in a statement sent to Swedish news agency TT.[44] On 14 December, he issued a fatwa against the suicide bomber saying: "It's forbidden to approve what has happened or try to justify it. Those who accept it or justify it are as guilty as the perpetrator himself."[45]

Oman Mustafa, chairman of the Islamic Federation in Sweden said in an interview that "This is an attack on Sweden and on all Muslims in Sweden."[46] Together with Ben Mahmoud Rahman, the imam and chairman of the Islamic Federation of Europe, the Islamic Federation in Sweden also issued a press release condemning such attacks: "Attacks like this have been carried out earlier in both Muslim and non-Muslim communities (such as in Saudi Arabia, Egypt, Pakistan, Spain and the UK) and then the Muslim scholars and theologians' position has been unanimously against such attacks. Also, important Islamic institutions and Muslim inter-governmental organisations, such as Al-Azhar University, the European Council for Fatwa, Organisation of the Islamic Conference, have all been united in that all terrorist attacks against civilians and innocent people is strictly prohibited and that it is not permissible to oppress, harm or intimidate others."[47][48] After this press released was issued, the attack was condemned during Friday prayer in Stockholm's grand mosque.[49]