The NHIndustries NH90 is a medium sized, twin-engine, multi-role military helicopter manufactured by NHIndustries. The first prototype had its maiden flight in December 1995. To date sixteen nations collectively ordered over 573 helicopters with deliveries starting in 2006. 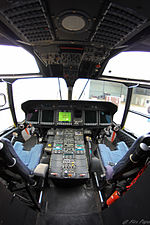 In 1985 France, West Germany, Italy, the Netherlands, and the United Kingdom teamed to develop a NATO battlefield transport and anti-ship/anti-submarine helicopter for the 1990s. The United Kingdom left the team in 1987.[2] On 1 September 1992, NH Industries signed an NH90 design-and-development contract with NAHEMA (NATO Helicopter Management Agency).[citation needed] This agency represented the four participating nations: France, Germany, Italy, and the Netherlands. Portugal later joined the agency in June 2001. Design work on the helicopter started in 1993.[citation needed] The first prototype, PT1, made the type's first flight on 18 December 1995.[2] The second prototype, PT2, first flew on 19 March 1997 and the third prototype, PT3, on 27 November 1998.[citation needed]

The NH90 has been developed in two main variants: the Tactical Transport Helicopter (TTH) and the NATO Frigate Helicopter (NFH).[2] However, many of the customer countries have requested specific changes for their NH90s. The programme had some technical and funding problems in the 1990s.[citation needed] Then the partner nations placed a large production order for 366 helicopters in June 2000.[2] This was soon followed by a series of orders from Europe, Asia, and Australia.

The NH90 was initially intended to be produced at three exporting assembly lines; Cascina Costa in Italy for AgustaWestland, Marignane in France and Donauwörth in Germany for Eurocopter. The Nordic and Australian contracts stipulated production locally (the Nordic ones at Patria in Finland and the Australian ones in Brisbane).

The programme ran into a 2 year production delay, and the first NH90s were delivered by late 2006. The type certification for the Finnish helicopters was finally approved on 19 February 2008.[3]

NH90 is also a candidate for the Norwegian All Weather Search and Rescue Helicopter (NAWSARH) that is planned to replace the Westland Sea King Mk.43B of the Royal Norwegian Air Force in 2015.[4] The other candidates for the NAWSARH contract of 10–12 helicopters are AgustaWestland AW101 Merlin, Bell-Boeing V-22 Osprey, Eurocopter EC225 and Sikorsky S-92.[5] As of 2009 Norway, following programme delays, have not received a date for the delivery of its helicopters.[6]

In August 2003, Greece ordered 20 NH90s with an option for 14 more.[7] Three aircraft have been delivered to the Greek armed forces by November 2011. These are being used for flight and maintenance training for the Greek Armed Forces.[citation needed]

In 2005, Australia ordered 12 to replace outgoing Army UH-1 Iroquois. The number was revised in June 2006 when the Australian Defence Force announced plans to replace its UH-60 Black Hawk and SH-3 Sea King fleets.[8] with an order of at least 34 additional NH90s, taking their total order to 46; four manufactured in Europe, 42 manufactured locally at Australian Aerospace (a Eurocopter subsidiary) in Brisbane.[9][10] In Australian service, the NH90 will be known as the MRH 90, where 'MRH' stands for Multi Role Helicopter.[11]

The NFH variant competed with the Sikorsky MH-60R for the Royal Australian Navy S-70B Sea Hawks replacement program, before selecting the latter in June 2011 with an order of 24.[12]

The Netherlands, one of the original supporters of the programme, has 20 units on order. However, due to design changes, the helicopter is too heavy as of 2009 to be used in combination with the Dutch frigates for which they were explicitly ordered. It is unclear what additional changes need to be made to make them suitable for the Dutch primary role.[13]

In July 2006, the Saudi Government signed a contract to purchase 64 NH90s.[14] In July 2006, the New Zealand Government signed a contract to purchase 8 NH90s (plus 1 extra for spares) to replace their Air Force's fleet of UH-1 Iroquois. On 20 June 2007, during the Paris Air Show 2007, Belgium signed the contract for 10 NH90s (4 NFH, 4 TTH + 2 options) and also became the sixth nation to join NAHEMA. On the same day, the German Army and the Luftwaffe placed an order for 42 additional NH90s.[citation needed]

The German Navy (Deutsche Marine) was considering procuring 30 NFH for their new Maritime Helicopter in 2009.[15]

The first NH90s were delivered by late 2006 to the German Army. These were followed by Italian and Finnish helicopters in 2007. Later during 2007, the Italian and French navies started to receive their NFH versions and the first Swedish NH90s were also delivered. On 18 December 2007 the first two MRH 90 aircraft were delivered to the Australian Defence Force.[16] The Royal Netherlands Navy got its first NH90 NFH in April 2010.[17] Norway started to receive their NH90s in November 2010.[18]

According to a 2010 Bild report, German Army experts deem the helicopter to be utterly unusable for the transportation of combat troops. Among other things they complained that the seats are only suitable to carry 110 kg (240 lb) maximum weight—not enough for a fully equipped soldier. Weapons cannot be sufficiently secured during transport. The floor is too weak and can be damaged by dirty combat boots. The helicopter can only land on firm ground, with obstacles not exceeding 16 cm (6.3 in). Troops carrying full equipment cannot board/leave the helicopter, as the access ramp is too weak. Adding a doorgun is not possible due to the lack of space.[19] In response to this article, the German Defense Ministry proclaimed that the report in question referred to a prototype version, and not to the production model, the specifications for which were not even finalised at the time of the report. The prototype evaluation and its results were described as a normal procedure in an ongoing design process.[20]

On 20 April 2010, an Australian Defence Force MRH-90 suffered an engine failure near Adelaide. Only one engine was affected and the helicopter was landed safely at the Edinburgh base. The manufacturer has sent personnel to Australia to investigate the failure.[21] On 18 May the ADF announced that all of the Australian MRH-90 fleet were grounded due to engine issues since the 20 April incident.[22] Flights resumed in July 2010.[23]

The primary role of the NFH version is autonomous anti-submarine warfare (ASW) and anti-surface unit warfare (ASuW), mainly from naval ships. These aircraft are equipped for day and night, adverse weather and severe ship motion operations.

The primary role of the TTH version is the transport of 20 troops or more than 2,500 kg of cargo, heliborne operations and search & rescue. It can quickly be adapted to MEDEVAC/CASEVAC missions by fitting up to 12 stretchers or cargo delivery capability

The abbreviation TTT (Tactical Troop Transport) is used for Finnish and Swedish TTHs in some contexts. 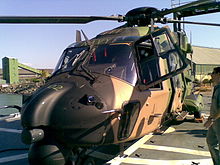 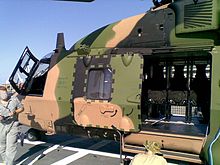 The NH90s in service in the French Armed Forces (both NFH and TTH versions) will be named "Caïman".[26]

Spain
Total of 104 on order distributed as follows. The first delivery was in 2010 with 45 helicopters. Spain will have a final assembly line operational at Albacete.[34] 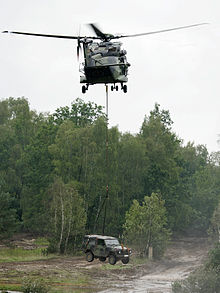