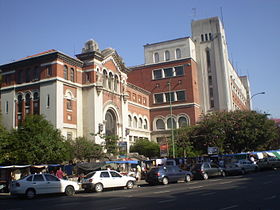 The museum, the most important of its kind in Buenos Aires and second only to the La Plata Museum of Natural Sciences, nationwide, owes its existence to a proposal made by Bernardino Rivadavia before the First Triumvirate (a precursor to modern Argentine government) in 1812. The ongoing struggle for Independence shelved Rivadavia's project, however, until 1823, when he revived the idea as a member of Governor Martín Rodríguez's cabinet.

The original museum opened in 1826 and was housed downtown in a loft inside the Santo Domingo Convent, which had been made available for the purpose following Rivadavia's expulsion of the Dominican order from Buenos Aires. Rivadavia closely oversaw the institution, the first of its kind in South America, and appointed Italian Argentine botanist Carlos Ferraris as its first director. Receiving a large gift of material and equipment from Presbyterian Minister Bartolomé Muñoz, the museum housed a collection 800 animal and 1500 mineral specimens, among others. Rivadavia also appointed a noted Italian astronomer, Ottaviano Fabrizio Mossotti, who installed the nation's first observatory, meteorological station and experimental physics laboratory during his tenure at the facility from 1828 to 1835. Among those who consulted the museum's growing body of research was Alexander von Humboldt, who requisitioned numerous meteorological studies for the Institut de France. 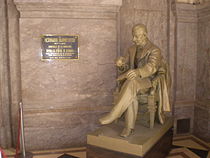 Monument in the museum's lobby to its influential early Director, Hermann Burmeister. 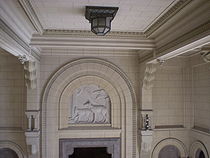 Detail of the Cenozoic paleontology hall. 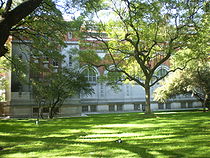 The rise of the paramount Governor of Buenos Aires, Juan Manuel de Rosas, proved to be the renowned institution's undoing, however. Devoutly religious, Governor Rosas returned the convent to the Dominican order in October 1835, forcing the museum to relocate to smaller, nearby buildings. Much of its equipment and research was lost during the forced relocation, and Ferrari and Mossotti returned to Italy. Rosas' overthrow in 1852 helped lead to the creation of the Society of Friends of Natural History, who had the museum relocated in 1854 to the "Illuminated block," the former Temple of St. Ignatius and its prestigious academy maintained by the Jesuits before their suppression in 1773. The recovering museum motivated German naturalist Hermann Burmeister to stay in Buenos Aires following a visit in 1857 recommended to him by Humboldt, leading to his appointment as its director in 1862. Burmeister founded the Argentine Paleontological Society in concert with the University of Buenos Aires and the Academy of Natural Sciences in Córdoba in 1870, helping extend interest in the field to the nation's hinterland. Burmeister also founded the museum's first periodical in 1874, opening the museum and its research to active peer review. Notable among the European researchers who took notice was Dutch zoologist Hendrik Weyenbergh, who arrived in Córdoba, where he founded the Argentine National Academy of Sciences.

The museum published numerous works under Burmeister's direction, who also donated a sizable part of its growing collection for the sake of the new La Plata Museum in 1884. An accident at the museum cost its noted German Argentine director his life in 1892, however. The museum was later directed by zoologist Florentino Ameghino, its first director born in Argentina. Ameghino incorporated adjoining buildings into the museum, which remained inadequate for its vast collection and facilities. Addressing this, Director Martín Doello-Jurado secured Congress' authorization for new museum facilities in 1925. Built on the western end of Parque Centenario, the first wing of the new museum was dedicated in 1929 and the institution was inaugurated in 1937.

Part of the museum's collection was transferred to the University of Buenos Aires Ethnographic Museum during the administration of President Juan Perón, who dismissed Doello-Jurado in 1946 as part of a wider intervention in national academics. Perón, however, also ordered the construction in 1948 of the museum's annex, which housed the National Natural Sciences Institute. The museum was transferred to the National Research Council (CONICET) in 1996 and, continuing to thrive, an internet data bank was created for the museum in 2002.

Besides the Natural Sciences Institute, the museum houses thirteen permanent exhibition halls, including an aquarium, a display with specimens collected from Argentina's numerous research stations in Antarctica, a geological collection centered around meteorites found in Argentina, a paleontology section notable for its carnotaurus, eoraptor, herrerasaurus and patagosaurus fossils, among others, and a cenozoic paleontology display featuring glyptodon, macrauchenia, megatherium and smilodon fossils. Academics and the general public can also avail themselves of a science auditorium, an art gallery, library and a café.