Military history of Italy during World War I

Military history of Italy during World War I

This article is about Italian military operations in World War I.

Italy, though nominally allied with Germany and Austria-Hungary, refused to join them when the war started. Instead Italy entered the war on the Allied side in May 1915.

The war was in general a big failure for Italy. The Italian army repeatedly attacked Austria, making little progress and suffering heavy losses, and being routed in 1917 by an Austrian counteroffensive.

In October 1918, the Italians attacked again. With revolution breaking out in Austria-Hungary, the Austrian army broke down, and the Italians drove deep into Austrian territory. Fighting ended on 3 November.

From neutrality to the intervention in the war

Italy was officially a member of the Triple Alliance with Germany and Austria-Hungary. Despite this, in the years before the war Italy had enhanced its diplomatic efforts towards the United Kingdom and France. This was because the Italian government had grown convinced that support of Austria (the traditional enemy of Italy during the 19th century Risorgimento) would not gain Italy the territories she wanted: Trieste, Istria, Zara and Dalmatia, all Austrian possessions. In fact, a secret agreement signed with France in 1902 practically nullified Italy's membership in the Triple Alliance.

A few days after the outbreak of the war, on 3 August 1914, the government, led by the conservative Antonio Salandra, declared that Italy would not commit its troops, maintaining that the Triple Alliance had only a defensive stance, whereas Austria-Hungary had been the aggressor. In reality, both Salandra and the minister of Foreign Affairs, Sidney Sonnino, started diplomatic activities to probe which side was ready to grant the best reward for Italy's entrance in the war. Although the majority of the cabinet (including former Prime Minister Giovanni Giolitti) was firmly contrary to the intervention, numerous intellectuals, including socialists such as Ivanoe Bonomi, Leonida Bissolati, and Mussolini, declared in favour of the intervention, which was then mostly supported by the Nationalist and the Liberal parties.

The diplomatic moves led to the London Pact (26 April 1915), signed by Sonnino without the approval of the Italian Parliament. By the Pact, after the victory Italy was to get Trentino and the South Tyrol up to the Brenner Pass, the entire Austrian Littoral (with Trieste]], Gorizia and Gradisca (Eastern Friuli) and Istria, but without Fiume), parts of western Carniola (Idrija and Ilirska Bistrica) and north-western Dalmatia with Zara and most of the islands, but without Split. Other agreements concerned the sovereignty of the port of Valona, the province of Antalya in Turkey and part of the German colonies in Africa.

Germany and Austria-Hungary had only advanced the possibility of negotiating parts of the Trentino and Eastern Friuli, without Gorizia and Trieste. The offer of the French colony of Tunisia was deemed unsatisfactory.

By the London Pact, Italy joined the Entente. On 3 May 1915 Italy officially revoked the Triple Alliance. In the following days Giolitti and the neutralist majority of the Parliament opposed declaring war, while nationalist crowds demonstrated in public areas for it. (The nationalist poet Gabriele D'Annunzio called this period le radiose giornate di Maggio - "the sunny days of May"). On 13 May Salandra offered his resignation to King Victor Emmanuel III. But Giolitti, fearful of nationalist disorder that might break into open rebellion, declined to succeed as prime minister. Salandra remained in office, and got his declaration of war against Austria-Hungary on 23 May 1915. (Italy declared war on Germany fifteen months later.) Italy thus entered the war under the impetus of a relative minority of its population and politicians.

Entrance in the war 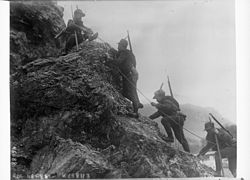 The front on the Austrian border was 650 km (400 mi) long, stretching from the Stelvio Pass to the Adriatic Sea. Militarily, the Italians had numerical superiority. This advantage, however, was negated by the difficult terrain. Also, the Italians lacked strategic and tactical leadership. The Italian commander-in-chief was Luigi Cadorna, a staunch proponent of the frontal assault whose tactics cost the lives of hundreds of thousands of Italian soldiers. His plan was to attack on the Isonzo front, with the dream of breaking over the Karst Plateau into the Carniolan Basin, taking Ljubljana and threatening Vienna. It was a Napoleonic plan, which had no realistic chance of success in an age of barbed wire, machine guns, and indirect artillery fire, combined with hilly and mountainous terrain.

The first shells were fired in the dawn of 24 May against the enemy positions of Cervignano del Friuli, which was captured a few hours later. In the same day the Austro-Hungarian fleet bombarded the railway stations of Manfredonia and Ancona. The first Italian casualty was Riccardo Di Giusto.

The main effort was to be concentrated in the Isonzo and Vipava valleys and on the Kras plateau, in the direction of Ljubljana. The Italian troops managed to obtain some initial successes, but, as in the Western Front, the campaign soon turned into a trench warfare. The main difference was the fact that, instead of in the mud, the trenches had to be dug in the Alpine rocks and glaciers, often up to 3,000 m (9,800 ft) of altitude.

In the first months of the war Italy launched the following offensives:

In these first four battles the Italian Army registered 60,000 fatalities and more than 150,000 wounded, equivalent to around one fourth of the mobilized forces. Also to be mentioned is the offensive in the upper Cadore, near the Col di Lana. Though secondary, this move blocked large Austro-Hungarian contingents, since it menaced their main logistic lines in Tyrol. 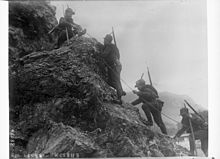 This stalemate situation dragged on for the whole 1916. While the Austro-Hungarians amassed large forces in Trentino, the Italian command launched the Fifth Battle of the Isonzo, lasting for eight days from 11 March 1916. This attempt was also fruitless.

In June the Austro-Hungarian counter-offensive (dubbed Strafexpedition, "Punishment Expedition") broke through in Trentino and occupied the whole Altopiano di Asiago. The Italian Army managed however to contain the offensive and the enemy retreated in order to strengthen its position in the Carso. On 4 August began the Sixth Battle of the Isonzo which, five days later, led to the Italian conquest of Gorizia, at the cost of 20,000 dead and 50,000 wounded. The year ended with three new offensives:

The price was a further 37,000 dead and 88,000 wounded for the Italians, again for no remarkable conquest. In late 1916 the Italian army advanced for some kilometers in Trentino, while, for the whole 1916–1917 winter the situation in the Isonzo front remained stationary.

In 12–28 1917 there took place the Tenth Battle of the Isonzo. The Battle of Mount Ortigara (10–25 June) was Cadorna's attempt to conquer back some territories in Trentino which had remained under Austro-Hungarian control. On 18 August 1917 began the most important Italian offensive, the Eleventh Battle of the Isonzo. This time the Italian advance was initially successful as the Bainsizza Plateau southeast of Tolmino was captured. But the Italian army outran its artillery and supply lines, thus preventing the further advance that may have finally succeeded in breaking the Austro-Hungarian army. Thus the Austro-Hungarian line ultimately held and the attack was abandoned on 12 September 1917.

The rout of Caporetto 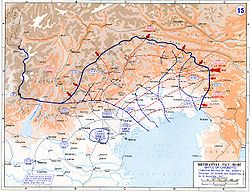 Though the last Italian offensive had proven inconclusive, the Austrians were in strong need of reinforcements. These became available when Russia crumbled and German troops from the Eastern front were sent to the Isonzo front. On 24 October 1917 the Central Powers troops broke through the Italian lines in the upper Isonzo, converging on Caporetto (the modern Kobarid) and surrounding the 2nd Italian Army. The Italian army commander, Luigi Capello, had been informed of a probable enemy attack, but had underestimated it.

From that area the Austro-Hungarians advanced for 150 km (93 mi) south-west, reaching Udine after only four days. The defeat of Caporetto caused the disintegration of the whole Italian front of the Isonzo. The situation was re-established by forming a stop line on the Tagliamento and then on the Piave rivers, but at the price of 700,000 dead, wounded and prisoners.[citation needed] Cadorna, who had tried to attribute the causes of the disasters to the 2nd Army, was fired. On 8 November 1917 he was replaced by Armando Diaz.

From Caporetto to the end of the war

The Central Powers ended 1917 with a general offensive on the Piave, the Altopiano di Asiago and the Monte Grappa. The Italian army was forced to call the 1899 levy, while that of 1900 was left for an hypothetical final effort for 1919. 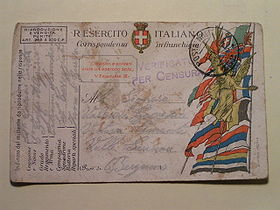 Postcard sent from an Italian soldier to his family, c. 1917.

The severe (often unreasonably harsh) discipline imposed by Cadorna, the long months spent in the trenches and the words of Pope Benedict XV about the "useless massacre" of the war, had weakened the Italian army's morale, were among the causes of the defeat of Caporetto. The Italian morale was however boosted by the need to save Italy itself from invasion. Further, the re-organization of the front, a changed tactical stance, allowed Diaz to concentrate his forces on a more defendable front.

The Austro-Hungarians stopped their attacks to prepare an offensive for the Spring of 1918. New reinforcements joined in after the end of the war against Russia. The offensive began on 15 June 1918 (see Battle of the Piave River) with six divisions. The Italians resisted the assault. The failure of the offensive marked the swan song of Austria-Hungary on the Italian front. The Central Powers proved finally unable to sustain further the war effort, while the multi-ethnical entities of the Austrian Empire were on the verge of rebellion. The Italians rescheduled their planned 1919 counter-offensive to October 1918, in order to prevent Austria-Hungary's recovery.

The Italian attack was started on 23 October from Vittorio Veneto, the troops advancing quickly in Veneto, Friuli and Cadore. Six days later Austria-Hungary surrendered. The armistice was signed on 3 November at Villa Giusti, near Padua. Italian soldiers entered Trento while Bersaglieri landed in Trieste. The following day the Istrian cities of Rovigno and Parenzo, the Dalmatian island of Lissa, the Dalmatian cities of Zara and Fiume were occupied: the latter not included in the territories originally promised to Italy in case of victory, but the Italians decided to intervene in reply to a local National Council, formed after the flight of the Hungarians, and which had announced the union to Italy.

The Italian army was also marching towards Ljubljana, but was halted by Serb troops. In the meantime the Regia Marina occupied Pola and Sebenico, which became the capital of the Military Government of Dalmatia.

Military situation in the colonies

As Italy entered the war on 23 May 1915, the situation of her forces in the colonies was critical. Italian Somaliland was far from being pacified, and in Cyrenaica the Italian forces were confined to some separated points on the coast. In Tripolitania and Fezzan, the story has a different beginning. On August 1914 the Italian forces reached Ghat, that is, conquered most of western Libya. But in November 1914, this advance turned into a general retreat, and on 7 April and 28 April, they suffered two reverses at Wadi Marsit (near Mizda) and al-Qurdabiya (near Sirte) respectively. By August 1915, the situation in Tripolitania was similar to that of Cyrenaica. The conquest of Libya was not resumed until January 1922. 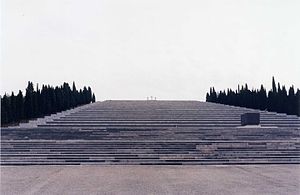 The Military Sanctuary of Redipuglia.

The territorial gains were small in comparison to the cost of the war for Italy. The debt contracted to pay the war expenses was paid back only in the 1970s. The uncertain socio-economic situation caused heavy social strife which led to the Biennio rosso and later the rise of Fascism.