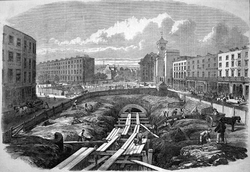 The Metropolitan Railway (MetR) was the first underground railway to be built in London, creating the world's first metro system.

The first railways to be built in the United Kingdom were constructed in the early 19th century. By 1850 there were 7 separate railway termini located in the London area: London Bridge, Euston, Paddington, King's Cross, Shoreditch, Waterloo and Fenchurch Street. Only Fenchurch Street was located within the City of London itself. London had also seen a large increase in road traffic congestion in this period. This was due in part to the fact that most people travelling to London by rail had to complete their journeys into the city centre by cab or omnibus.

Coat of arms of the Metropolitan Railway

The concept of an underground railway linking the City of London with the mainline termini had first been proposed in the 1830s. But it was not until the 1850s that this idea was taken seriously. Charles Pearson, Solicitor to the City of London, was a leading promoter of several of these schemes. He helped set up the City Terminus Company in 1852 to build such a railway, but neither Parliament nor the City of London Corporation was willing to fund it. The Bayswater, Paddington and Holborn Bridge Railway Company was more successful. In January 1853 it held its first directors' meeting and appointed John Fowler as its engineer.[1] Parliamentary approval for their "North Metropolitan Railway" project was secured in the summer of 1853. They soon acquired the City Terminus Company and came to an agreement with the Great Western Railway whereby the GWR would help fund the scheme provided that a junction was created with its Paddington terminus. In 1854 an Act of Parliament was passed approving the construction of an underground railway between Paddington and Farringdon Street via King's Cross, renaming the line the Metropolitan Railway. Construction finally began in February 1860, by which time Pearson had persuaded the City of London Corporation to give money to the project.

The construction of the line encountered its fair share of problems. Fowler's use of the "cut-and-cover" method caused massive traffic disruption in north London and during the work the Fleet Sewer burst into the diggings and flooded the partially built tunnels. This is not to mention the number of buildings that had to be demolished on the surface. However the railway eventually opened to the public on 10 January 1863. In its first few months of operation, an average of 26,500 passengers used the line every day.[2] Pearson did not live to see the completion of the project. He died in September 1862. But his hard work and perseverance during his lifetime ensured that the Metropolitan Railway would be the start and not an end of underground railway building in London.

Initially the railway was worked using GWR broad-gauge rolling stock. But in August 1863, after massive disagreement between the two companies, the MetR found itself having to work the line. With assistance from the Great Northern Railway this was achieved using standard gauge rolling stock: the broad gauge was removed in 1869.

By the turn of the century the MetR had its foot in both the main-line and in the underground system for London. On 1 July 1913 the Metropolitan Railway bought the Great Northern and City Railway, which ran from Moorgate to Finsbury Park.[3] 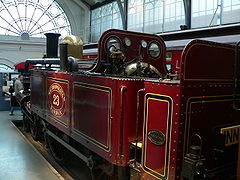 Metropolitan Railway steam locomotive number 23, one of only two surviving locomotives from the world's first underground railway, is preserved at London's Transport Museum

The MetR began extending into West London and further into the City: 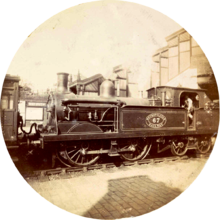 Shortly after its west and central London extensions MetR began expansion to the north and north-west. Railways always had a great deal of influence on the areas through which they ran, not least in this case. In the 1920s the term Metro-land was coined by the MetR's marketing department: advertisements extolling the benefits of healthy and bracing air and a train service unequalled for frequency and rapidity ... to and from the City without change of carriage appeared; and the railway provided a broad-sheet for House Seekers. Shortly after World War I estates were being laid out (at Neasden, Wembley Park, Pinner and Rickmansworth), and places such as Harrow Garden Village came into existence. John Betjeman was a great follower of this form of suburbia and made a celebrated television documentary called Metro-land in 1973.

The official opening train at Ruislip station on 30 June 1904.

The Aylesbury and Buckingham Railway (A&BR) between Aylesbury and Verney Junction was incorporated on 6 August 1860 and opened on 23 September 1868. It served intermediate stations at Waddesdon Manor (renamed Waddesdon on 1 October 1920), Quainton Road, Grandborough (renamed Granborough Road on 6 October 1920), and Winslow Road.[5] The A&BR was never extended to Buckingham.

In the late 1880s the MetR had plans to extend its projected Aylesbury line northwards to Morton Pinkney,[6] to make a junction with the East and West Junction Railway. Instead the A&BR was amalgamated with the MetR on 1 July 1891, and it was that line which formed the northward progress of the MetR. The section of line from Morton Pinkney to just north of Quainton Road railway station was built later as part of the London Extension of the Great Central Railway (GCR), joining the, by then, MetR tracks into London, forming the Great Central Main Line which opened for passenger traffic on 15 March 1899.

In April 1906 the MetR section from Harrow to Verney Junction was leased to a Joint Committee of the MetR and GCR: it was worked on a five-yearly basis alternately by the joint lessees.

Passenger services on the line were withdrawn between Quainton Road and Verney Junction from 6 July 1936, and the intermediate stations of Granborough Road and Winslow Road closed. The last through service, a parcels train from Verney Junction, was on 6 September 1947.

North of Aylesbury, at Quainton Road, a 6½-mile (10 km) branch railway ran to Brill. It started life as the Wotton Tramway built and run under the auspices of the Duke of Buckingham. The Brill Tramway closed to all traffic on the night of 30 November / 1 December 1935.

Concern about smoke and steam in the tunnels led to new designs of locomotive. In 1861 (before the line opened) trials were made with the experimental "hot brick" locomotive nicknamed Fowler's Ghost. This was unsuccessful and the first public trains were hauled by GWR Metropolitan Class condensing 2-4-0 tank engines designed by Daniel Gooch. The above were broad gauge. They were followed by standard gauge Great Northern Railway locomotives and then by the Metropolitan Railway's own standard gauge locomotives:

Electric locomotive and train on the Metropolitan Railway in the 1920s

Electrification had been considered by the MetR as early as the 1880s, but such a method of traction was still in its infancy, and agreement would need to be reached with the District because of the shared ownership of the Inner Circle. Experiments were later carried out on the Earl's Court-High Street Kensington section, and a jointly-owned train of six coaches began a passenger service in 1900. As a result of those tests a MetR/District committee in 1901 recommended overhead AC traction on the Ganz three-phase system. This was accepted by both parties but when an American led group, the Underground Electric Railways Company of London (UERL), took control of the District there was disagreement. The group was led by Charles Yerkes, whose experience in the United States led him to favour DC, with third-rail pickup similar to that in use on the City & South London Railway and Central London Railway. After arbritration by the Board of Trade the latter system was taken up and the railways began electrifying the routes, using multiple-unit stock.

Services on the "Extension line" in the open remained steam-hauled for some years, necessitating change of locomotives:

Two branches were built with electric traction from the outset:

The Railways Act 1921, which became law on 19 August 1921, did not list any of London's Underground railways among the other companies which were to be grouped; although at the draft stage the Metropolitan had been included.[9]

Services north of Aylesbury were withdrawn in 1936, though services did get to Quainton Road again between 1943 and 1948. In the same year a Metropolitan line service extension from Whitechapel to Barking was implemented along the District line tracks.

In 1939 the Bakerloo Line was extended in new deep-level tunnels from Baker Street to the surface at Finchley Road. The Bakerloo then took over the slow lines and stations from Finchley Road to Wembley Park and thence the Stanmore branch, while Metropolitan line trains ran non-stop on the fast lines to Wembley Park. In its turn that section from Baker Street to Stanmore became the northern section of the Jubilee Line.

In 1961 the section between Rickmansworth and Amersham (including the Chesham branch) was electrified thus eliminating the final London Transport operated steam-hauled passenger trains. At the same time London Transport ceased running any passenger trains north of Amersham. British Railways operated passenger steam trains continued to operate over this section on the Marylebone- Nottingham service until 1966. Maintenance trains ran beyond Amersham as late as 1971. In addition, an annual "Steam on the Met" event ran until 2000, when it was suspended prior to the reorganisation of London Underground in readiness for the introduction of the new "Public-Private Partnership" (PPP) maintenance contracts for the network, though the London Underground Railway Safety Case does permit running future specials.

The Bluebell Railway has four of the older MetR Ashbury and Craven Carriages, and a fifth, built at Neasden, is at the London Transport Museum.