The American Can Company Building

The Marion Section is a district on the West Side of Jersey City, New Jersey.[1]

West of Journal Square and north of Holy Name Cemetery, the Marion's two distinct neighborhoods are separated by PATH rail lines It borders other districts of Riverbend, Croxton and the West Side, and is sometimes is considered to include the area along the Hackensack Riverfront, Tonnele Circle, and neighborhood overlapping India Square. Marion is mostly a low-rise residential district that is home to several new housing developments, light manufacturing, restaurants, LaPointe Park and the Marion Branch Public Library. Broadway, U.S. Route 1/9, Sip Avenue and West Side Avenue are the main streets running through the neighborhood.

The warehouse district north of the PATH line 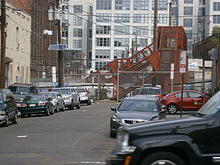 Despite regualr requests from residents and local Jersey City officials, no PATH station has built in neighborhood, separated by tracks crossed by bridge

Many of the manufacturing and warehouse buildings along St Paul's Avenue have received a New Jersey State historical designation. The 1940 Marion Gardens housing Project creates the western residential border for the section.[2]

Jersey City's mayor, Jerramiah Healy has requested that Marion be given a stop on the PATH train at Broadway and West Side Avenue.[3] There are a growing number of condos and other housing units being built in the Marion neighborhood and city officials feel a stop on the PATH system will be necessary to unclog the city streets and lessen the commute for residents. Officials feel a station would help to bolster development in the neighborhood, which has fewer cultural attractions than many Jersey City neighborhoods and is without a school. Public School #23 operates on Romaine Ave.

The Marion Greenway Park has received funding and eventually will connect to the Hackensack RiverWalk.[4][5]