The airport is the largest state owned and operated airport in the country. It opened in 1930 and is the third-busiest airport in Greece,[4] serving 3.9 million passengers annually. It is the main airport of Northern Greece and serves the city of Thessaloniki (the second-largest city in Greece), the popular tourist destination of Chalkidiki and the surrounding cities of the region.

The airport’s terminal consists of three floors. The ground floor serves arrivals only and is divided into two sections: international/extra-Schengen arrivals and domestic/intra-Schengen arrivals. The first floor serves departures and also includes a shopping centre. On this floor there are 34 check-in counters, waiting areas, bars, stores that sell tobacco and magazines and various airlines’ offices. The second floor houses two restaurants and several bars with views to the runways.

The airport has two runways (10-28 and 16-34) and two taxiways. There are 22 stands for narrow-body aircraft and about 20 for light ones. Macedonia International Airport is a hub for Astra Airlines and a secondary hub for Aegean Airlines and Olympic Air.

In September 1965 a new terminal building opened on a new location (current location). In the period between 1968 and 1973, the terminal was expanded, with the construction of a second floor and its first motorway junction. Due to the earthquake of 1978 in Thessaloniki, the control tower was destroyed, so a new one was constructed, independent of the main terminal building. The next expansion of the terminal took place in two stages, with the projects starting in 1991 and 1993 respectively. The municipality of Thessaloniki, as European Capital of Culture for 1997, took over a projects for the aesthetic intervention, renovation, modernisation and reorganisation of the spaces of the building.

The terminal building took its current form, when an additional of 19,000m² were added to the western and eastern side of the terminal building, completed in November 2000 and June 2003 respectively. The western extension included the widening of the international departures area (new Extra-Schengen area ), including new administration offices, a new health station and the new station control of Olympic Airlines. The eastern expansion included a new check-in hall, new waiting halls and additional administrative offices for airlines. Today the terminal has a total floor area of 32,000m². Finally, during 2004-2006 the new motorway junction was completed on the level of the departures entrance of the Terminal and new parking spaces for cars, buses and taxis were created. 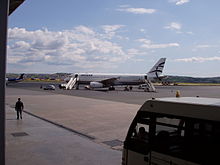 An Aegean Airlines Airbus A320-200 at Macedonia Airport, sometime before departing for Frankfurt (April 2010) 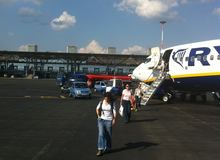 A Ryanair plane from London Stansted parked on the tarmac, with the airport terminal in the background.

History of passenger traffic at the airport since 1994.

Apart from passengers, the airport also handled 8.2 thousand tons of freight in 2010, a considerable drop from the 21.4 thousand tons it handled in 1997.[15] 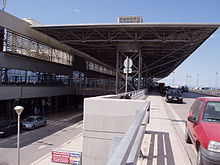 Inside the airport there are two restaurants, four coffee-bars and a tobacco store. Furthermore, except from the Duty Free shop, there are stores selling traditional products, jewellery, accessories and clothes. Passengers also can utilize a luggage secure-wrapping service and luggage lockers. An Hellenic Post post office and automated teller machines are available on the passengers’ departure area. There is also an office of the Greek National Tourism Organisation. Finally, car hire companies can be found in the airport such as AVIS, Europcar, Hertz and Sixt.

The airport of Thessaloniki is also the home ground of Aeolus Aviation Academy and Thessaloniki’s Aeroclub, which offer private pilot's training.

The airport is served by a 24-hour bus service from the Thessaloniki Urban Transport Organization (OASTH). Line 78 (78N during night) starts from Macedonia Central Bus Station (intercity buses terminal), passing by and stopping at the New Railway Station of Thessaloniki (OSE) and then arrives directly at the airport through the city center. Line 78A travels exactly the same route with the difference, that during its route it makes an additional stop at the A.S. IKEA bus station. At the bus stops of the New Railway Station and A.S. IKEA, passengers can find many connections with many other major lines of OASTH.

In September 2010 it was announced that an extension of the under construction Thessaloniki Metro to the airport is under consideration. The manufacturing company considers the possibility of constructing the extension with an over-ground rail-based transportation system, such as a monorail.

The airport is directly connected with the city's southeast major road arteries and the ΕΟ67, (the Thessaloniki-Chalkidiki motorway), offering direct access via the Thessaloniki ring road to the A1/E75 and A2/E90 motorways; making transportation to and from Macedonia International Airport relatively easy. A total of 2,285 parking spaces for cars exist at the front of the terminal building and taxis are available at the designated taxi waiting area, located outside the arrivals exit. The taxi fare to the city centre is approximately 15-20€.

As part of a comprehensive masterplan released by the government in 2002, several projects have been started to improve Macedonia International Airport. Other than the building works on the current terminal, including the construction of a new cargo terminal, the masterplan features two major projects.

Phase 1 of the masterplan includes the expansion of existing runway 10/28; and is currently under construction. During the process of the project design, 80 Greek and 5 Danish civil engineers and scientists from other specialties have worked on the project. Both the runway and the taxiway will be extended by 1,150m, 1,000m out into the sea, resulting in a runway that will have a total length of 3,440m with an extra safety distance of 150m. Its width will be 50m while the taxiway’s width, which will be located at an axial distance of 183m from the runway, will be 23m. The new runway and taxiway sections, will be equipped with appropriate lighting and control systems that will extend a further 750m into the sea. The completion date was set for completion in 2011, but due to financial problems of the manufacturing company, reactions of environmental organizations and reactions by the residents of the surrounding areas, fearing ecological dangers by extenting land into the sea, have held the project back and today a new completion date for 2013 has been set.[16] The completion of the runway project will allow for the landing of larger aircraft, such as the Boeing 747 and A380 and increase safety, as the aircraft will have greater flexibility and visual contact, on days with bad weather conditions.

Phase 2 of the masterplan has heralded the construction of a new larger terminal, together with a new apron for 36 aircraft, of which 14 will be stationed at contact place. The second phase of the masterplan will drasticly increase the status of the airport and eliminate existing passenger traffic problems, especially during the summer period. The new terminal will be able to accommodate 8 million passengers per year (in peak hours 2.800 passengers for departures or arrivals) while the terminal’s total area is expected that it will be 115.000m².[17] In December 2010, the Greek government revealed that there are thoughts for the construction of the new terminal through private investing, the same way in which Athens International Airport was realised. Until now no further official announcement has been issued.