Dinosaur behavior is difficult for paleontologists to study since much of paleontology is dependent solely on the physical remains of ancient life. However, trace fossils and paleopathology can give insight into dinosaur behavior. Interpretations of dinosaur behavior are generally based on the pose of body fossils and their habitat, computer simulations of their biomechanics, and comparisons with modern animals in similar ecological niches. As such, the current understanding of dinosaur behavior relies on speculation, and will likely remain controversial for the foreseeable future. However, there is general agreement that some behaviors which are common in crocodiles and birds, dinosaurs' closest living relatives, were also common among dinosaurs. Gregarious behavior was common in many dinosaur species. Dinosaurs may have congregated in herds for defense, for migratory purposes, or to provide protection for their young. There is evidence that many types of dinosaurs, including various theropods, sauropods, ankylosaurians, ornithopods, and ceratopsians, formed aggregations of immature individuals. Nests and eggs have been found for most major groups of dinosaurs, and it appears likely that dinosaurs communicated with their young, in a manner similar to modern birds and crocodiles. The crests and frills of some dinosaurs, like the marginocephalians, theropods and lambeosaurines, may have been too fragile to be used for active defense, and so they were likely used for sexual or aggressive displays, though little is known about dinosaur mating and territorialism. Most dinosaurs seem to have relied on land-based locomotion. A good understanding of how dinosaurs moved on the ground is key to models of dinosaur behavior; the science of biomechanics, in particular, has provided significant insight in this area. For example, studies of the forces exerted by muscles and gravity on dinosaurs' skeletal structure have investigated how fast dinosaurs could run,[1] whether diplodocids could create sonic booms via whip-like tail snapping,[2] and whether sauropods could float.[3] 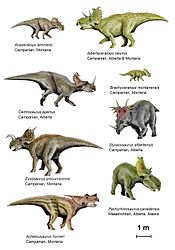 Centrosaurine ceratopsids did not fully develop their cranial ornamentation until fully grown. Scott Sampson argues that comparing ceratopsids to modern mammals with a similar lifecycle can yield insight into the socioecology of the ancient horned dinosaurs.

Parental care is implied by the fossilized remains of a grouping of Psittacosaurus consisting of one adult and 34 juveniles. In this case, the large number of juveniles may be due to communal nesting.[4]

In 2001 paleontologist Scott D. Sampson published a study speculating on the socioecology of ceratopsid dinosaurs in the light of correlations between anatomy and behavior in extant wildlife observed by earlier researchers.[5] Ceratopsid social behavior had been controversial with some authors envisioning large "socially complex" herds represented by bone beds in the fossil record and some like Lehman arguing that such aggregations of individuals amounted to regional infestations as sometimes occurs with modern tortoises and crocodiles.[6]

Sampson argues in favor of complex herding using the socioecology of modern ecological and anatomical ceratopsian analogues.[6] A biologist named Jarman observed among modern ungulates correlations between "ecological variables including feeding style, body size, group size, home range, antipredator behavior, growth pattern, and social organization."[7] He speculated that a taxon's social organization was effected by the distribution of resources through the effect that distribution had on the dispersion of conspecific females throughout the environment.[7] Herding is normal in environments where resources are less predictable, while territoriality tends to evolve in environments with a more consistent distribution of resources.[8] Ceratopsids feature both prominent mating signals (horns and frills) and at least periodic gregarious behaviors.[9] Ceratopsians may have been only social during the dry season and scattered when the rainy season started.[10] Many African herding animals do this today.[10] Ceratopsid bone beds tend to come from more inland environments than other ceratopsian remains.[10] Other workers had concluded that for part of the year ceratopsids lived in small groups near the coasts and when the dry season came they formed large herds and moved inland.[10] This migration away from the coasts may have represented a move to nesting grounds.[10]

Sampson found in previous work that at least centrosaurines did not achieve adult morphology with its accompanying mating signals until nearly fully grown.[11] Relative age of the animals was determined based on the size, degree of coossification, secondary ossification, and growth related changes in bone texture.[11] Sampson finds commonality between the retarded growth of mating signals in centrosaurines and the extended adolescence of animals whose social structures are ranked hierarchies founded on age-related differences.[11] In these sorts of groups young males are typically sexually mature for several years before actually beginning to breed, when their mating signals are most fully developed.[12] Females, by contrast due not have such an extended adolescence.[12]

Lehman had previously argued that the higher diversities of species and population densities supported the notions that ceratopsid bone beds were left by temporary infestations lacking in social structure like in crocodiles and tortoises.[13] However, Sampson observes that crocodiles themselves actually show complex behavioral hierarchies.[13] He also notes that some modern herding mammals, at least occasionally, form groups denser than those hinted at by ceratopsid bone beds.[13] Herds would also have afforded some level of protection from the chief predators of ceratopsids, tyrannosaurids.[14]

Trackways have also confirmed parental behavior among ornithopods from the Isle of Skye in northwestern Scotland.[15]

Based on current fossil evidence from dinosaurs such as Oryctodromeus, some herbivorous species seem to have led a partially fossorial (burrowing) lifestyle.[16]

The first potential evidence of herding behavior was the 1878 discovery of 31 Iguanodon dinosaurs which were then thought to have perished together in Bernissart, Belgium, after they fell into a deep, flooded sinkhole and drowned.[17]

Trackways of hundreds or even thousands of herbivores indicate that duck-bills (hadrosaurids) may have moved in great herds, like the American Bison or the African Springbok. Jack Horner's 1978 discovery of a Maiasaura ("good mother dinosaur") nesting ground in Montana demonstrated that parental care continued long after birth among the ornithopods.[18]

Sauropod tracks document that these animals traveled in groups composed of several different species, at least in Oxfordshire, England,[19] although there is not evidence for specific herd structures.[20] There is evidence that Patagonian titanosaurian sauropods (1997 discovery) nested in large groups.[21] A dinosaur embryo (pertaining to the prosauropod Massospondylus) was found without teeth, indicating that some parental care was required to feed the young dinosaur.[22]

The interpretation of dinosaurs as gregarious has also extended to depicting carnivorous theropods as pack hunters working together to bring down large prey.[23][24] However, this lifestyle is uncommon among the modern relatives of dinosaurs (crocodiles and other reptiles, and birds – Harris's Hawk is a well-documented exception), and the taphonomic evidence suggesting pack hunting in such theropods as Deinonychus and Allosaurus can also be interpreted as the results of fatal disputes between feeding animals, as is seen in many modern diapsid predators.[25] Head wounds from bites suggest that theropods, at least, engaged in active aggressive confrontations.[26]

In 2001, Bruce Rothschild and others published a study examining evidence for stress fractures in theropod dinosaurs and the implications for their behavior.[27] Since stress fractures are caused by repeated trauma they are more likely to be a result of the animal's behavior than fractures obtained during a single injurious event.[28] The distribution of stress fractures also has behavioral significance.[29] Stress fractures to the hand are more likely to result from predatory behavior since injuries to the feet could be obtained while running or migrating.[29] In order to identify stress fractures occurring in the feet specifically due to predatory behavior, the researchers checked to see if the toes which bore the greatest portion of the animals weight while in motion also had the greatest percentage of stress fractures.[30] Since the lower end of the third metatarsal would contact the ground first while a theropod was running it would have borne the most stress and should be most predisposed to suffer stress factors more frequently.[30] The lack of such a bias in the examined fossils indicates an origin for the stress fractures from a source other than running, like interaction with prey.[30] They suggested that such injuries could occur as a result of the theropod trying to hold struggling prey with its feet.[30] Contact with struggling prey is also the likely cause of tendon avulsions found in the forelimbs of Allosaurus and Tyrannosaurus.[30] The authors concluded that the presence of stress fractures provide evidence for "very active" predation-based diets rather than obligate scavenging.[27]

Additional Cannibalism amongst some species of dinosaurs was confirmed by tooth marks found in Madagascar in 2003, involving the theropod Majungasaurus.[31]

One example of immature dinosaurs forming social groups comes from a site in Inner Mongolia that has yielded the remains of over twenty Sinornithomimus, from one to seven years old. This assemblage is interpreted as a social group that was trapped in mud.[32]

Tooth wear patterns hint that complex head shaking behaviors may have been involved in tyrannosaur feeding.[33] The partially healed tail of an Edmontosaurus is damaged in such a way that shows the animal was bitten by a tyrannosaur but survived.[34]

The Mongolian oviraptorid Citipati was discovered in a chicken-like brooding position in 1993, which may mean it was covered with an insulating layer of feathers that kept the eggs warm.[35]

A recently discovered troodont fossil demonstrates that some dinosaurs slept with their heads tucked under their arms.[36] This behavior, which may have helped to keep the head warm, is also characteristic of modern birds.

Primitive dromaeosaurids such as Microraptor may have been arboreal (tree-climbing).[37]

From a behavioral standpoint, one of the most valuable dinosaur fossils was discovered in the Gobi Desert in 1971. It included a Velociraptor attacking a Protoceratops,[38] providing evidence that dinosaurs did indeed attack each other.[34]

The enigmatic scansoriopterygids may have been arboreal (tree-climbing).[39]