The Virginia opossum (Didelphis virginiana), commonly known as the North American opossum or tlacuache in Mexico, is the only marsupial found in North America north of Mexico. A solitary and nocturnal animal about the size of a domestic cat, and thus the largest opossum, it is a successful opportunist. It is familiar to many North Americans as it is often seen near towns, rummaging through garbage cans, or lying by the road, a victim of traffic.

The Virginia opossum is the original animal named "opossum". The word comes from Algonquian 'wapathemwa' meaning "white animal", not from Greek or Latin, so the plural is opossums. Colloquially, the Virginia opossum is frequently called simply possum. The name is applied more generally to any of the other marsupials of the Didelphimorphia and Paucituberculata orders, which includes a number of opossum species in South America.

The possums of Australia, whose name is derived from a similarity to the Virginia opossum, are also marsupials, but of the order Diprotodontia.

The Virginia opossum is found throughout Central America and North America east of the Rockies from Costa Rica to southern Ontario; it seems to be still expanding its range northward and has been found farther north than Toronto. In recent years their range has expanded west and north all the way into northern Minnesota. Its ancestors evolved in South America, but invaded North America in the Great American Interchange, which was enabled by the formation of the Isthmus of Panama about 3 million years ago.

Originally native to the eastern United States, it was intentionally introduced into the West during the Great Depression, probably as a source of food,[3] and now occupies much of the Pacific coast. Its range has been expanding steadily northwards into Canada. 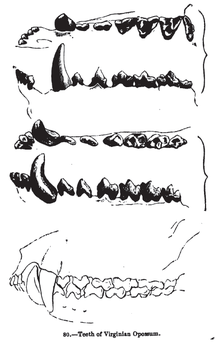 Dentition, as illustrated in Knight's Sketches in Natural History

Virginia opossums can vary considerably in size, with larger specimens found to the north of the opossum's range and smaller specimens in the tropics. They measure 13–37 inches (35–94 cm) long from their snout to the base of the tail, with the tail adding another 8.5–19 inches (21.6–47 cm). Weight for males ranges from 1.7 to 14 pounds (0.8–6.4 kg) and for females from 11 ounces to 8.2 pounds (0.3–3.7 kg).[4] Their coats are a dull grayish brown, other than on their faces, which are white. Opossums have long, hairless, prehensile tails, which can be used to grab branches and carry small objects. They also have hairless ears and a long, flat nose. Opossums have 50 teeth, the most out of any North American mammal,[5] and opposable, clawless thumbs on their rear limbs.

Opossums have thirteen nipples, arranged in a circle of twelve with one in the middle.[6][7] 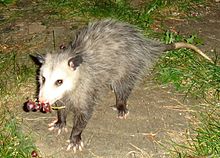 Showing opposable "thumb" on back foot. 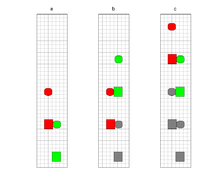 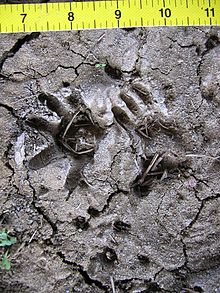 Virginia opossum tracks generally show five finger-like toes in both the fore and hind prints. The hind tracks are unusual and distinctive due to the opossum's opposable thumb, which generally prints at an angle of 90 degrees or greater to the other fingers (sometimes near 180 degrees). Individual adult tracks generally measure 1⅞ inches long by 2 inches wide (4.8 × 5.1 cm) for the fore prints and 2½ inches long by 2¼ inches wide (6.4 × 5.7 cm) for the hind prints. Opossums have claws on all fingers fore and hind except on the two thumbs (in the photograph, claw marks show as small holes just beyond the tip of each finger); these generally show in the tracks but may not. In a soft medium, such as the mud in this photograph, the foot pads will clearly show (these are the deep, darker areas where the fingers and toes meet the rest of the hand or foot, which have been filled with plant debris by wind due to the advanced age of the tracks).

The tracks in the photograph were made while the opossum was walking with its typical pacing gait. The four aligned toes on the hind print show the approximate direction of travel.

In a pacing gait, the limbs on one side of the body are moved simultaneously, just prior to moving both limbs on the other side of the body. This is illustrated in the pacing diagram, which explains why the left-fore and right-hind tracks are generally found together (and vice versa). However if the opossum were not walking (but running, for example), the prints would fall in a different pattern. Other animals that generally employ a pacing gait are raccoons, bears, skunks, badgers, woodchucks, porcupines and beavers.

When pacing, the opossum's stride generally measures from 7 to 10 inches, or approximately 18 to 25 cm (in the pacing diagram the stride is 8.5 inches, where one grid square is equal to one square inch). To determine the stride of a pacing gait, measure from the tip (just beyond the fingers or toes in the direction of travel, disregarding claw marks) of one set of fore/hind tracks to the tip of the next set. By taking careful stride and track-size measurements, one can usually determine what species of animal created a set of tracks, even when individual track details are vague or obscured. 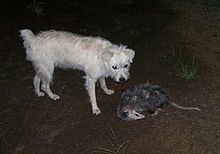 When injured or threatened, the Virginia opossum is well known for attempting to fake death or "play possum", as seen in this photo.

The Virginia opossum is noted for reacting to threats by feigning death. This is the genesis of the term "playing possum", which means pretending to be dead or injured with intent to deceive. In the case of the opossum, the reaction seems to be involuntary, and to be triggered by extreme fear. It should not be taken as an indication of docility, for under serious threat, an opossum will respond ferociously, hissing, screeching, and showing its teeth. But with enough stimulation, the opossum will enter a near coma, which can last up to four hours. It lies on its side, mouth and eyes open, tongue hanging out, emitting a green fluid from its anus whose putrid odor repels predators. Besides discouraging animals that eat live prey, playing possum also convinces some large animals that the opossum is no threat to their young.

Opossums are omnivorous and eat a wide range of plants and animals such as fruits, insects, and other small animals. Persimmons are one of the opossum's favorite foods during the autumn.[8] Opossums in captivity are known to engage in cannibalism, though this is probably uncommon in the wild.[9] Placing an injured opossum in a confined space with its healthy counterparts is inadvisable.

The Virginia opossum does not hibernate, although it may remain sheltered during cold spells.[10]

Perhaps surprisingly for such a widespread and successful species, the Virginia opossum has one of the lowest encephalization quotients of any marsupial.[11]

Opossums, like most marsupials, have unusually short life spans for their size and metabolic rate. The Virginia opossum has a maximal life span in the wild of only about two years.[12] Even in captivity, opossums live only about four years.[13] The rapid senescence of opossums is thought to reflect the fact that they have few defenses against predators; given that they would have little prospect of living very long regardless, they are not under selective pressure to develop biochemical mechanisms to enable a long life span.[14] In support of this hypothesis one population on Sapelo Island, five miles off the coast of Georgia, which has been isolated for up to thousands of years without natural predators was found by Dr. Steven Austad to have evolved life spans up to 50% longer than those of mainland populations.[15][14]

An early description of the opossum comes from explorer John Smith, who wrote in Map of Virginia, with a Description of the Countrey, the Commodities, People, Government and Religion in 1608 that "An Opassom hath an head like a Swine, and a taile like a Rat, and is of the bignes of a Cat. Under her belly she hath a bagge, wherein she lodgeth, carrieth, and sucketh her young."[16][17] The opossum was more formally described in 1698 in a published letter entitled "Carigueya, Seu Marsupiale Americanum Masculum. Or, The Anatomy of a Male Opossum: In a Letter to Dr Edward Tyson," from Mr William Cowper, Chirurgeon, and Fellow of the Royal Society, London, by Edward Tyson, M. D. Fellow of the College of Physicians and of the Royal Society. The letter suggests even earlier descriptions.[18]

Like raccoons, opossums can be found in urban environments, where they eat pet food, rotten fruit, and human garbage. Though sometimes mistakenly considered to be rats, opossums are not closely related to rodents. They rarely transmit diseases to humans, and are surprisingly resistant to rabies, mainly because they have lower body temperatures than most placental mammals. In addition, opossums limit the spread of Lyme disease, as they successfully kill off most disease carrying ticks that feed on them.[19]

The opossum was once a favorite game animal in the United States, in particular in the southern regions which have a large body of recipes and folklore relating to it.[20] Their past wide consumption in regions where present is evidenced by recipes available online[21] and in books such as older editions of The Joy of Cooking.[22] A traditional method of preparation is baking, sometimes in a pie or pastry,[23] though at present "possum pie" most often refers to a sweet confection containing no meat of any kind.

Although it is found throughout the country, the Virginia opossum's appearance in folklore and popularity as a food item has tied it closely to the American Southeast. In animation, it is often used to depict uncivilized characters or "hillbillies". The main character in Walt Kelly's long running comic strip Pogo was an opossum. In an attempt to create another icon like the teddy bear, U.S. President William Howard Taft was tied to the character Billy Possum.[24][25] The character did not do well, as public perception of the opossum led to its downfall. In December 2010, a cross-eyed Virginia opossum in Germany's Leipzig Zoo named Heidi became an international celebrity.[26] She appeared on a TV talk show to predict the 2011 Oscar winners, similar to the World Cup predictions made previously by Paul the Octopus, also in Germany.[27]