Apparent death, colloquially known as playing dead or playing possum, is an antipredator behavior observed in a wide range of animals in which they take on the appearance of being dead to an observer. This could either be an involuntary reflex action, as in tonic immobility; or an adaptive behavior as in thanatosis, which is used both as a defense mechanism and as a form of aggressive mimicry.

Apparent death of a beetle

Tonic immobility is a natural state of paralysis that animals enter, in most cases when presented with a threat. Some scientists relate it to mating in certain animals like the shark.

Some sharks can be placed in a tonic state.[1] The shark remains in this state of paralysis for an average of fifteen minutes before it recovers. Scientists have exploited this phenomenon to study shark behaviour. The effects of chemical shark repellent have been studied to test effectiveness and to narrow down dose sizes, concentrations, and time to awaken.[2]

Sharks may not always respond to tonic immobility by physical inversion of the animal, as has been demonstrated with lemon and Reef sharks. With tiger sharks 3–4 metres (10 to 15 feet) in length, tonic immobility may be achieved by placing hands lightly on the sides of the animal's snout approximate to the general area surrounding its eyes. Great White sharks have been shown to be not as responsive as other species whenever tonic immobility has been attempted. Scientists believe that tonic immobility, displayed by sharks, may be linked with defense, because female sharks seem more responsive than others.[3] During tonic immobility, the dorsal fin(s) straighten, and both breathing and muscle contractions become more steady and relaxed.

Tonic immobility has also been used to describe the paralysis which often immobilizes animals, such as rodents or birds, when they feel threatened by a predator. It can be argued that tonic immobility plays a role in survival if it helps a hunted animal to blend in with its surroundings by remaining as motionless as an inanimate object. This tonic state is common with invertebrates as well.[citation needed]

Inducing tonic immobility in common animals requires, in some cases, extreme treatment such as electric shock, along with other elements which produce stress.[citation needed]

In an interesting eye witness case in 1997 around the Farallon Islands off the coast of California, a female orca was seen purposely inducing tonic immobility in a great white shark. The orca held the shark upside down to induce the tonic immobility, and kept the shark still for fifteen minutes, causing it to suffocate to death. This was the first recorded eye witness case of predation on a great white shark in the wild by a species other than humans. Another case of orcas purposely inducing tonic immobility in fish has been documented with stingrays in New Zealand. In this case, the orcas turn themselves upside down before attacking, trap the stingrays in their mouths, then quickly right themselves, in turn flipping the stingray over, inducing the tonic immobility, rendering the fish helpless and an easy meal.[4]

Tonic immobility as a scientific tool

According to Gilman et al.[5] the investigation of ‘animal hypnosis’ dates back to the year 1646 in a report by Kircher. As a scientific tool, tonic immobility is considered to be a fear-potentiated response induced by physical restraint and characterised by reduced responsiveness to external stimulation. It has been used as a measure in the assessment of animal welfare, particularly hens, since 1970.[6][7][8] The rationale for the tonic immobility test is that the experimenter simulates a predator thereby eliciting an anti-predator response - “death feigning”. The precept is that the prey animal 'pretends' to be dead to be able to escape when/if the predator relaxes its concentration. Death feigning birds often take advantage of escape opportunities; tonic immobility in quail reduces the probability of the birds being predated by cats.[9]

To induce tonic immobility, the animal is gently restrained on its side or back for a period of time, e.g. 15 seconds. This is done either on a firm, flat surface or sometimes in a purpose-built ‘V’ or ‘U’-shaped restraining cradle. In rodents, the response is sometimes induced by additionally pinching or attaching a clamp to the skin at the nape of the neck.[10] Scientists record behaviours such as the number of inductions (15 second restraining periods) required for the animal to remain still, the latency to the first major movements (often cycling motions of the legs), latency to first head or eye movements and the duration of immobility, sometimes called the ‘righting time’. 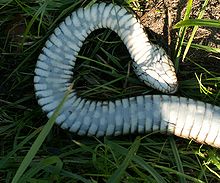 In animal behaviour, thanatosis (from the Greek noun θανάτωσις meaning "putting to death") is the process by which an animal feigns death in order to evade unwelcome attention. It can be for various reasons, such as that of a prey evading a predator, a male trying to mate with a female, or a predator trying to lure potential prey closer. Pasteur classifies it as a form of self-mimesis, a form of camouflage or mimicry in which the "mimic" imitates itself in a dead state.[19]

For defensive purposes, thanatosis hinges on the pursuers' becoming unresponsive to its victim, as most predators only catch live prey.[19]

In beetles, artificial selection experiments have shown that there is heritable variation for length of death-feigning. Those selected for longer death-feigning durations are at a selective advantage to those at shorter durations when a predator is introduced,[20] which suggests that thanatosis is indeed adaptive.

In the Hog-nosed Snake, a threatened individual rolls onto its back and appears to be dead when threatened by a predator, while a foul-smelling, volatile fluid oozes from its body. Predators, such as cats, then lose interest in the snake, which both looks, and smells, dead. One reason for their loss of interest is that rotten smelling animals are avoided as a precaution against infectious disease, so the snake is, in this case, exploiting that reaction. Newly-hatched young also instinctively show this behaviour when rats try to eat them.[21]

In mammals, the Virginia opossum is perhaps the best known example of defensive thanatosis. "Playing possum" is an idiomatic phrase which means "pretending to be dead".[22] It comes from a characteristic of the Virginia opossum, which is famous for pretending to be dead when threatened.[23][24] This instinct does not always pay off in the modern world; for example, possums scavenging roadkill may use it in response to the threat posed by oncoming traffic, and subsequently end up as roadkill themselves.[25]

"Playing possum" can also mean simply pretending to be injured, unconscious, asleep, or otherwise vulnerable, often to lure an opponent into a vulnerable position him or herself.[22]

Thanatosis has also been observed in some invertebrates such as the wasp, Nasonia vitripennis,[26] and the cricket, Gryllus bimaculatus,[27]

In the spider species Pisaura mirabilis, male spiders often stage elaborate rituals of gift-giving and thanatosis to avoid getting eaten by female spiders during mating. Studies have a shown higher chances of success in mating with females for males who exhibit death-feigning more frequently than for males who do it less.[28]

In the cichlid Haplochromis livingstoni, thanatosis serves an aggressive purpose. The large predatory fish will lie down on its side on the bottom sediments and assume a blotchy coloration. Scavengers, attracted to what seems like a dead fish, will approach the predator to investigate. H. livingstoni then abandons the pretense, righting itself again and quickly eating any scavenger unfortunate enough to come too close.[29]